President Trump on Tuesday addressed the issue of police brutality by taking executive action that would provide incentives for police departments to increase training about the use of force and to strengthen a national database to track misconduct.

The president’s approach, which he announced at a Rose Garden event Tuesday afternoon, seeks to leverage federal grant money to encourage local departments to take action around a set of national “best practices.”

But it falls short of the more sweeping policy changes activists have called for following the death of a black man, George Floyd, in police custody in Minneapolis last month.

“Reducing crime and raising standards are not opposite goals,” Trump said in the Rose Garden. “They are not mutually exclusive. They work together. ... That is why today I’m signing an executive order encouraging police departments nationwide to adopt the highest professional standards to serve their communities. These standards will be as high and as strong as there is on Earth.”

Trump said that just prior to the announcement, he had met with with family members of several black people who have been killed by police, including Atatiana Jefferson, Jemel Roberson, Michael Dean and others.

“To all of the hurting families, I want you to know that all Americans mourned by your side,” Trump said. “Your loved ones will not have died in vain.”

The executive action comes as Republican congressional leaders signaled Monday that legislative reforms to overhaul police practices could slip beyond this month. Senate Majority Whip John Thune (R-S.D.), the No. 2 GOP leader, said it was “probably unlikely” that the Senate will take up the police package before the July 4 recess.

The Senate GOP package, being primarily drafted by Sen. Tim Scott (R-S.C.), the only Republican senator who is African American, is expected to be released later this week. Though it is not expected to explicitly bar the use of chokeholds, as the House Democratic plan does, it attempts to discourage the practice by withholding federal funds to police agencies that allow them, according to two Senate GOP officials who spoke anonymously to describe legislation that is not yet public.

Trump aides emphasized Monday that the president remains opposed to any legislation that would end qualified immunity for police officers.

It's a start, but falls WAY short of the desires of the country AND police departments.  It gives the GOP something to embrace and have their supporters falsely claim they did something. 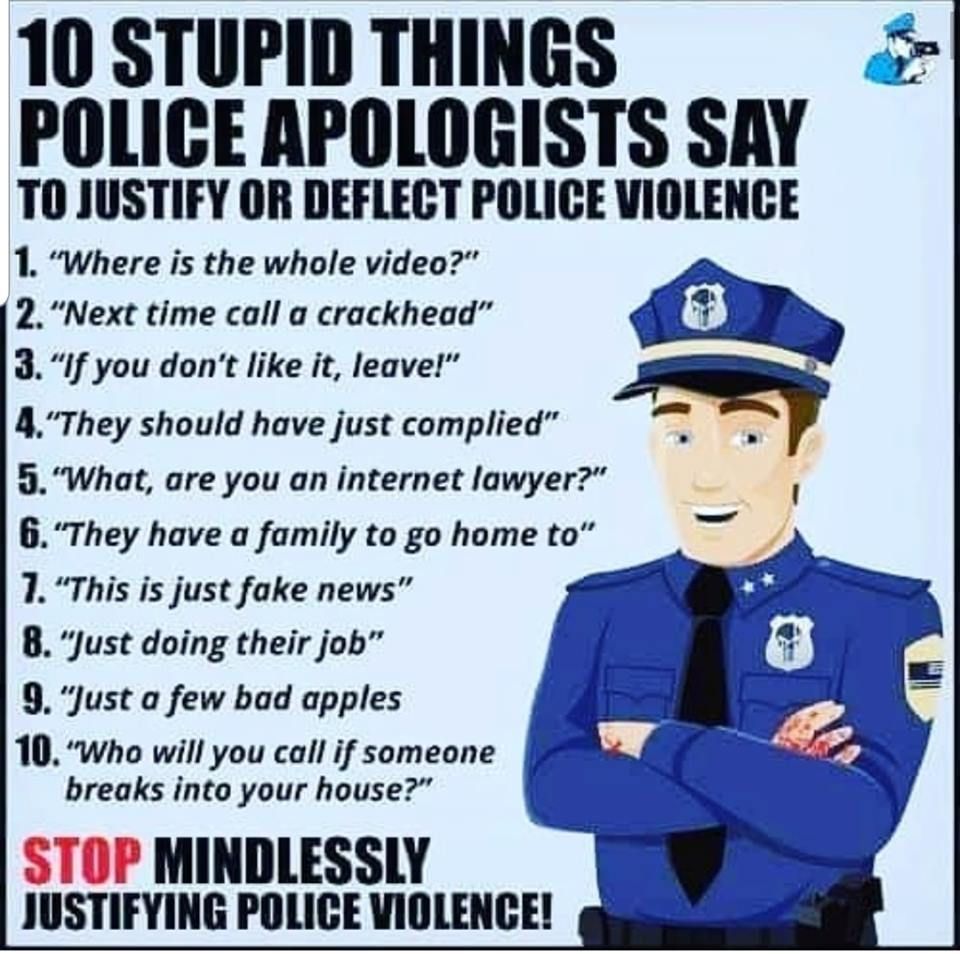 Did anyone really think ToadPOTUS would back actual reform of racist police proclivities? What an absurd expectation for a Toad who has just spent the last 3 1/2 years doing everything in his power to exert maximum harm on poor non-white people while heaping praise on Nazi's KKK and White Supremacists, not to mention blood soaked dictators?

But if you really are serious about "police reform", how 'bout we take a long look at what we've done to the responsibilities we've piled on the cops over the past 35 years, and fix that as well.

Back in the 60's and 70's, we had a growing cadre of mental health specialists to deal with "disturbed" citizens, trained guidance counselors in our schools, decent public housing projects were replacing slums and there was a VERY bright future for those who already had jobs and especially those who were moving toward adulthood. In fact, had the average worker's wage continued to advance along the same path it had since 1936, the average worker today would be bringing home over $90,000 and saving 10% of their pay.

But then Republicans stopped taxing the rich which stopped us from supporting everybody else - no more middle class wages growing faster than the 1%, no more government supported mental institutions, no more gui9dance counselors and teachers, no more entirely affordable higher education, no more great jobs or retirement with dignity, no more bright future for one and all.

And the problem of dealing with all those things Reagan's tax cut took fell to our police.

Is it any wonder they're not real pleased about dealing with the homeless, the mentally infirm, the angry youth with no future AND the hundreds of millions of guns the NRAGOP has made sure are available to anyone with the price?

You want the helpful cops you remember from your childhood? REPEAL THE REAGAN TAXSCAM. If We the People can write ourselves a check for $3 TRILLION because an incompetent Toad was unable to act against a virus, we can restore a tax code that kept our Nation moving toward true equality of opportunity for 40 years, and our grandkids won't be stuck with the bill for our unwillingness to do the right thing.

It's an odd executive order.   Many small departments are not capable of getting accreditation.   So they will potentially be shut out of applying for federal grants?

And honestly the only neutral accreditation body I know of is CALEA.  The rest are state government level accreditations.  Will those count?  They don't do much for accountability, IMO.

Of course trumps spiel was marked with numerous LIES, like Obama and Biden did nothing about police reform.  Too funny.....

Centristsin2010
Honored Social Butterfly
Trump did not address the racism issue directly on Tuesday. Instead, he suggested the problem rested on a small number of individual officers.
"They're very tiny. I use the word tiny," he said. "It's a very small percentage. But nobody wants to get rid of them more than the really good and great police officers." Yet, if they DID as trump falsely claims, they would have by now....
The President said he was signing the order "to deliver a future of safety and security for Americans of every race, religion, color and creed."  Lip service....NOTHING about requiring body camera's....wouldn't want to see the flaws in the Atlanta's cops work now, would we?
Later, Trump veered from a speech about police reform to launch political attacks, falsely claiming that his predecessor Barack Obama, along with his current election rival former Vice President Joe Biden, did not attempt to address police reform issues when they were in office.  And of course, NOTHING ABOUT EQUAL JUSTICE!!!  NOTHING about racial profiling....
The order, which also sets financial incentives for police departments to establish credentialing programs and follow standard "best practices," is a modest attempt by Trump to confront a national reckoning over racial inequities and law enforcement.
exerts from;  Trump offers full-throated defense of police in executive action signing

How much can we really find believable and let’s just see what comes out of this.
trump took the opportunity to turn this into a political rally. Lie about the Obama administration, telling how the virus will disappear, how great the economy is doing, and of course all of the great things he has done for minorities.
If anyone really believes trump, please go get checked!

2 Kudos
303 Views
0
Share
Report
Reply
Turn on suggestions
Auto-suggest helps you quickly narrow down your search results by suggesting possible matches as you type.
Showing results for
Show  only  | Search instead for
Did you mean:
Users
Announcements