The announcement was tacit recognition that the tax cut Trump and Republicans passed into law last year isn’t proving as popular as they had hoped. The law is widely regarded as having mainly helped corporations and wealthy people. Many election forecasts predict that Democrats are likely to win control of the House of Representatives.

Most Americans do not want to go back to the bad old days when health insurance companies could charge sick people more for coverage or turn them away altogether. But a lawsuit by 20 U.S. states seeking to invalidate protections against those practices contained in the Affordable Care Act (ACA) could allow just that - and older people will be hit hardest.

The lawsuit, Texas v. Azar, was brought in February by Texas and 19 other Republican-led states. It builds on the recent repeal, as part of last year’s tax reform law, of the ACA’s individual mandate which had required that people carry insurance. The plaintiffs argue that since the mandate was an essential part of the ACA, the entire law should be invalidated.

But if Texas prevails, 52 million Americans with pre-existing conditions could lose coverage, face higher premiums or find themselves locked into their current coverage, Jost said. So would women and older people. “It’s a very dangerous lawsuit,” he said. 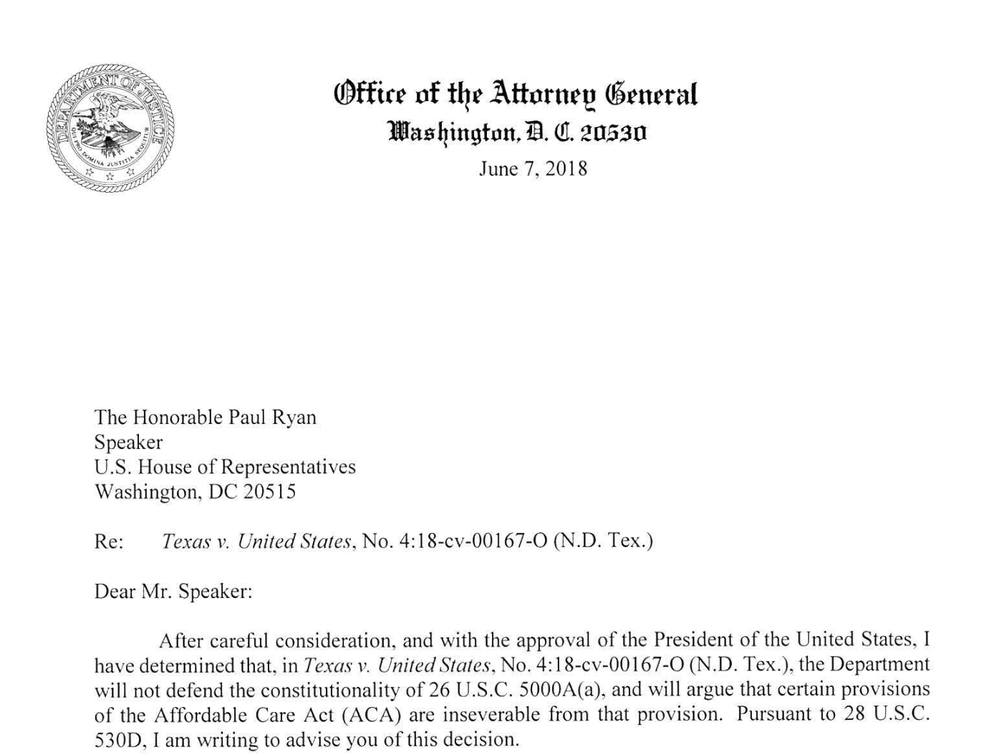 President Donald Trump on Wednesday sent out another tweet on health care. “Republicans will totally protect people with Pre-Existing Conditions,” he wrote. “Democrats will not!”

By now, the fundamental dishonesty of that statement shouldn’t require explanation.

Anybody even dimly aware of recent history ― specifically, the part where Democrats passed the Affordable Care Act, only to have Republicans spend eight years trying to repeal it ― should recognize the claim as a lie.

The guidance gives states leeway to rewrite the rules of their insurance markets by allowing the sale of policies that don’t include the law’s pre-existing protections ― and then letting people use federal tax credits to buy them.

These plans will be financially attractive, although some buying them won’t understand the limits or will get sick or injured after purchase. In either case, they will end up with medical bills they can’t pay.

One of the best judges of what the change means for people with pre-existing conditions are the organizations that represent such people. On Wednesday, 29 of them ― including everybody from the American Cancer Society and American Diabetes Association to the March of Dimes and National Hemophilia Foundation ― put out a statement warning that “this dangerous action could take us back to the days when people with pre-existing conditions were openly discriminated against and blatantly denied access to lifesaving care.”

It won’t affect most prescriptions purchased by patients at local pharmacies.

Trump will tout his plan as part of his “America-first” agenda, blaming other nations for paying too little for drugs and relying on Americans to absorb the higher prices that fund new pharmaceutical innovation. The president has repeatedly demanded that other nations pay more for medicines, a move that he’s claimed would enable the U.S. to get better deals.

President Donald Trump said Congress will vote on a new tax cut for middle-class Americans after the midterm elections, even though Republican lawmakers say they have no such legislation in the works.

“We’re giving a middle-income tax reduction of about 10 percent,” Trump said Monday as he departed the White House for a campaign rally in Houston. “We’ll do the vote after the election.”
Trump said the new plan could be announced as soon as Nov. 1, just before the Nov. 6 elections. Treasury Secretary Steven Mnuchin said on Sunday that “we hope to have something soon.”
The announcement was tacit recognition that the tax cut Trump and Republicans passed into law last year isn’t proving as popular as they had hoped. The law is widely regarded as having mainly helped corporations and wealthy people. Many election forecasts predict that Democrats are likely to win control of the House of Representatives.
Source - https://www.bloomberg.com/news/articles/2018-10-22/trump-says-congress-to-vote-on-10-percent-tax-cut...