President Donald Trump confirmed Friday he pulled back a military strike on Iran after he learned the number of possible casualties.

“We were cocked & loaded to retaliate last night on three different sights (sic),” Trump revealed on Twitter. The attack was planned in retaliation for Iran shooting down a U.S. surveillance drone on Thursday in international waters.

Trump said prior to the strikes he was told by a general the casualties could be up to 150 people.

“Ten minutes before the strike I stopped it, not proportionate to shooting down an unmanned drone,” he wrote.

Trump added that he was in “no hurry” for additional military conflicts with Iran but warned them against obtaining a nuclear weapon.

The president recalled the recent history of the United States relationship with Iran noting that former President Barack Obama “made a desperate and terrible deal” that included over a billion in cash.

“Iran was in big trouble and he bailed them out,” Trump said. “Gave them a free path to Nuclear Weapons, and SOON.”

The president added that Iran continued to shout “Death to America” despite the deal, which he terminated as president.

“They are a much weakened nation today than at the beginning of my Presidency, when they were causing major problems throughout the Middle East,” Trump said. “Now they are Bust!”

Trump, "Our military is new, rebuilt, and ready to go"!

I don't think so. Our military has been the elite military in the world for decades, long before Trump arrived on the scene. 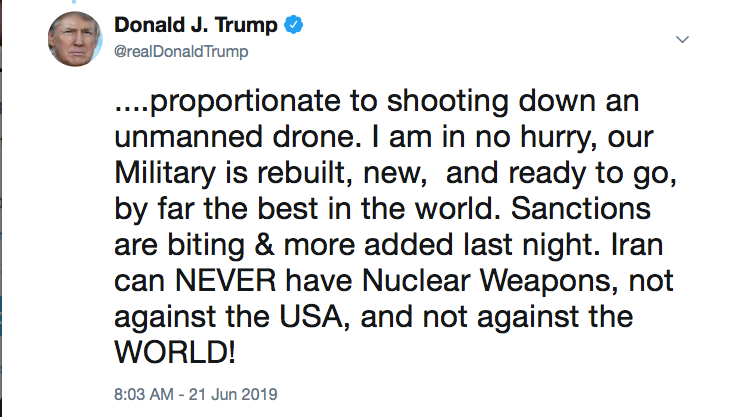 Make them pay in a way that is good for us and the rest of the world and bad for the Iranian Government.

I recalled, for everyone's attention, in the other thread on this drone situation how the US shot down an Iranian passenger jet in 1988, loss of life was all 290 aboard. An unprovoked attack on a civilian airline. In the end, President Reagan provided Iran with a formal apology.

Now what would be the response of the US to another country openly and blatantly shooting down a jet taking off from, say, JFK? I imagine the response would include calls for nuking the perpetrator country.

What is with these Neocons that Trump has in his administration? Thankfully in this case, at least, Trump came to his senses (or someone convinced him to do so).

Yes, and Kudos to Reagan for the way handled it. Reagan also kept us out of war when Russia had shot down a Korean airliner enroute from New York City to Seoul via Anchorage, Alaska.

And JFK prevented a war with Russia / Cuba.

This drone spy plane - nobody died. If you're going to spy on a country it's best to use a non-manned drone precisely for this reason. Nobody dies. No war. I heard the spy plane did cost a couple hundred $ million. I thought I heard it was a prototype.

Trump has his faults. Plenty. And diplomacy is not his strong suit. But I think we have to give him Kudos because somehow he managed to avoid a military conflict (war) with Venezuela, and so far, no war with Iran.

I'm not comfortable with his foreign policy nor do I like Trump surrounding himself with the likes of Bolton, Pompeo and Abrams (Venezuela).

We'll have to see what happens. He is the one responsible for getting us into this mess by pulling out of the Iranian Deal and following it up with severe sanctions. It's up to him to get us out of this - peacefully.

mickstuder:   (CNN)President Donald Trump abruptly called off military strikes against Iran on Thursday night after previously approving the strikes in retaliation for Iran shooting down a US military drone,

What a mess.  Trump campaigned on being against "stupid wars" (like Iraq etc) and vowed not to be sucked into another one, so here he is surrounded by war mongering hawks like Bolton and Pompeo trying their best to get a war with Iran started. God help the USA that we're having to rely on Donald Trump to be the grownup and use some restraint with Iran.

The arm chair Generals are out in force I see...

You guys are just too funny! (and predictable)

I for one, am just happy that none of you, is in charge...

Actually, the ones that are "too funny" are those sitting by not criticizing trump, and accepting all of his reckless and confused actions and inaction when any crisis comes along.  I am certainly happy that none of you are "in charge"!

The arm chair Generals are out in force I see...

You guys are just too funny! (and predictable)

I for one, am just happy that none of you, is in charge...

VIMTSTL
Report Inappropriate Content
0
Kudos
433
Views
Reply
0 Kudos
Turn on suggestions
Auto-suggest helps you quickly narrow down your search results by suggesting possible matches as you type.
Showing results for
Show  only  | Search instead for
Did you mean:
Users
Announcements