Trump's bullying tactrics have not gotten good results with anyone.

"Megan should never disrespect our Country, the White House, or our Flag, especially since so much has been done for her & the team, Be proud of the Flag that you wear."

Trump was reacting to a new viral video in which Rapinoe, asked months ago whether she would visit the White House if invited by the president, responded casually: “Pfft. I’m not going to the f------ White House.” Rapinoe isn’t alone either — teammates Alex Morgan, Ali Krieger and Becky Sauerbrunn have all shared similar sentiments publicly.

Apparently to Trump, this means that Rapinoe and her highly decorated teammates don’t respect their country and aren’t patriotic enough.

AMAZING! .... Amazing hypocrisy from TREASONOUS Trump who committed TREASON on numerous occasions including the most obvious at Helsinki when he threw the U.S.A. under the bus to appease a Russian KGB agent, Putin!!!

Megan Rapinoe should be given the Medal of Freedom when the WH is occupied by a Democratic President in 2021 .... And Trump should be watching that ceremony from jail!

Don’t ya love how trump has lying and projection down pat...it’s only unfortunate that his supporters ignore this, or actually believe in his devisive style, and lies told.

1.What has trump done for the Womens soccer team?

3.Megan, like many of us, loves our Country and our Flag. That’s why she is outspoken, and rails against trump!

Thanks Megan for supporting the US!

Rapinoe and the U.S. women’s national team are exactly the type of athletes who should be celebrated by the White House, whether or not they win in France.

PARIS — Megan Rapinoe scored both goals against Spain on Monday (AND BOTH GOALA AGAIN AGAINST FRANCE ON THURSDAY) to advance the United States to the quarterfinal round of the Women’s World Cup, where they faced the hosts and favorites France on Friday. Rapinoe scored two goals against France, too, helping the U.S. advance to the semifinals against England on July 2. But despite her prowess on the field, the American midfielder was the target of a rant from tweeter-in-chief Donald Trump last week.

"Megan should never disrespect our Country, the White House, or our Flag, especially since so much has been done for her & the team,” Trump tweeted on June 26. "Be proud of the Flag that you wear."

Trump was reacting to a new viral video in which Rapinoe, asked months ago whether she would visit the White House if invited by the president, responded casually: “Pfft. I’m not going to the f------ White House.” Rapinoe isn’t alone either — teammates Alex Morgan, Ali Krieger and Becky Sauerbrunn have all shared similar sentiments publicly.

Apparently to Trump, this means that Rapinoe and her highly decorated teammates don’t respect their country and aren’t patriotic enough. Trump, who in the same tweet claimed to be “a big fan” of women’s soccer, clearly doesn’t know much about Megan Rapinoe or the U.S. women’s national team.

After all, for years Rapinoe and her colleagues have been doing the most patriotic things athletes can do: Not only have they’ve been winning World Cups and Olympic gold medals for the United States, they’ve managed it all while fighting for equality — in sports and society at large.

When Rapinoe first joined the national team in 2006, the U.S. women were already fighting for the rights of female athletes. They were demanding a living wage so they don’t need second jobs, a calendar of regular games to stay sharp and protections so if players get injured (or pregnant) their careers wouldn’t be stuck in limbo — benefits their male counterparts already enjoyed. Their efforts have served as inspiration to women’s national teams around the world, who have followed the USA’s lead.

Earlier this year, the American players sued their boss, the U.S. Soccer Federation, alleging longtime institutionalized gender discrimination. The headline-grabbing part of the lawsuit was about equal pay, but the complaint makes a larger and more compelling point about female athletes being treated as an afterthought.

Rapinoe, who is openly gay, has been perhaps the most outspoken of her teammates.

She was the first white athlete to join in NFL quarterback Colin Kaepernick’s ongoing protest over police brutality and other racial inequalities by kneeling during the national anthem in 2016. That was the moment that Rapinoe — an affable, gregarious and witty fan-favorite — managed to become a lightning rod. The player who once memorably celebrated a World Cup goal by running over to a field microphone and belting out “Born in the U.S.A.” by Bruce Springsteen was suddenly being called un-American.

At least 24 women have accused   Donald Trump of sexual misconduct since the 1970s.

Trump was captured on video that you can catch on utube now ......bragging about groping women's privates or kissing them cause he said something like the fact he's famous so he gets away with it.

What is also  astonishing that he got 52% of white women's votes anyway regardless of his disrespect of women  and the  uncomfortable truth about Christian support for Trump.

Trump has problems with and feels threatened by any strong and/or confident women.

No woman wants to be in a room with him.

Rapinoe has accepted an invitation to visit from AOC.   That should really chap his ever expanding behind.   The Lebron quote is priceless and very very true.

The Women’s team has a right to take positions and have earned their place to demand to be treated equally, they have certainly shown the Men where it’s at with their results of being winners. I seldom watch soccer, but do try to watch the Women’s team. It’s fun to watch how well they play together as a team. 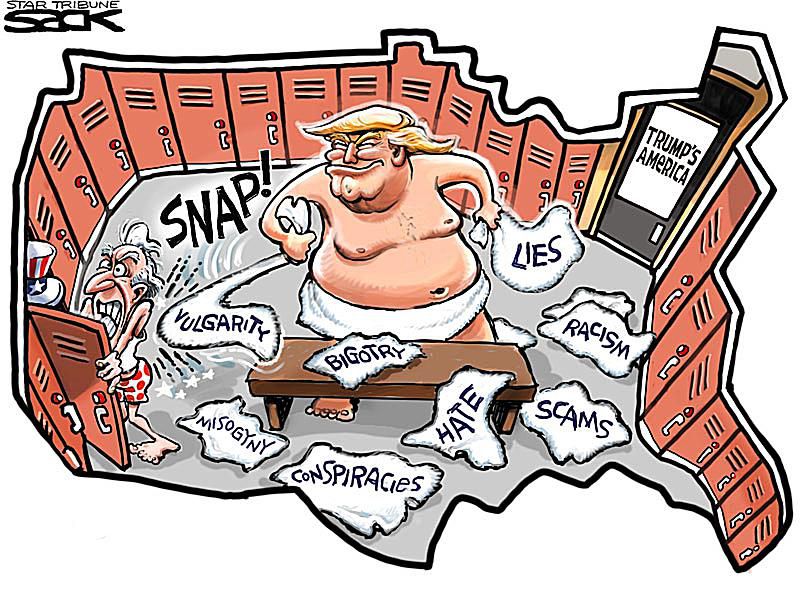 "FAKE 45 #illegitimate" read a sign at the Woman's March in DC, 1/27/2017
Report Inappropriate Content
5
Kudos
645
Views
Reply
5 Kudos
Turn on suggestions
Auto-suggest helps you quickly narrow down your search results by suggesting possible matches as you type.
Showing results for
Search instead for
Did you mean:
Users
Announcements