The other shoe with Manafort

I could see Trump pardoning Paul Manafort, if he's convicted, but after the November 6 Election. He might pardon a whole group of people at once, including some Democrats, like he did with Rod Blagojevich, to spread the media focus away from Manafort. 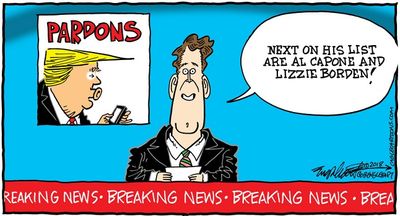 The ignoblers are more than likely not paying attention to this trial.    As a KISS - Manaforts team is not attempting to say that laws were not broken, they are attempting to sell the story that Manafort wasn't to blame, it was all done by his top hire.     Well, if they had been listening or reading about the trial, that excuse isn't going to work, unless the people on the jury are ignoblers...and facts and testimony don't have a bearing on the verdict.

Everyone in the trump orbit will pay.

Manafort is in the grinder, The evidence is on paper, which cannot make up lies.

If he is pardoned, doesn’t he lose 5th Amendment rights. Or will he turn when he wakes up and realizes that trump will throw him under the bus. Or, has he and his family been threatened by russians?

Who he previously dealt with and owed money to.

It will be fascinating to watch and see what dim-witted trump supporters have to say....

The other shoe with Manafort

At some point, the jury will return a verdict in the Paul Manafort trial. Right now, it looks like Mr. Manafort will be wearing his ostrich jacket, paid from funds in an account he did not claim to the IRS, in jail.

Then, every person currently or potentially in the Mueller spotlight will be watching to see if Trump actually grants Manafort a pardon. My guess is that he will not. If he does, it would pretty much insure a blue wave in Congress and, maybe, the Senate. Every voter who wants to believe that Trump is working FOR America will get the shock of his life.  Mueller will just move on to the next defendant.

But, if he does NOT grant a pardon, every person in Trump's orbit will be evaluating their own exposure.  Trump has pardoned people with no right to be pardoned (Yes, YOU Sheriff Joe) but there were no consequences and Trump hates consequences.

I think he is going to leave Manafort out to dry secure in the ignorance that no one else will come forward and rat him out.

Have I mentioned how much I am looking forward to the Fall?

Report Inappropriate Content
Reply
4 Kudos
Turn on suggestions
Auto-suggest helps you quickly narrow down your search results by suggesting possible matches as you type.
Showing results for
Show  only  | Search instead for
Did you mean:
Users
Announcements