The Week We Should Not Forget

The Week We Should Not Forget

The Week We Should Not Forget for Our Own Sake

April 10, 2020
Much happened this week and we can’t afford to ignore any of it. The events of the last seven days provide significant opportunities for civic action.

Bernie Sanders suspended his peoples’ presidential campaign while staying on upcoming primary ballots to acquire more delegates to take to the Democratic convention. He concedes the nomination to Delaware corporatist Joe Biden. But he is determined to use his leverage to get Biden to adopt many important and practical reforms and redirections that would benefit the people instead of greedy big business CEOs.

The unsteady Biden needs Sanders voters more than ever in several swing states.

Bernie Sanders is right to call for a people’s political revolution to roll back the silent corporate coups d’état.
Corporatism has taken over public budgets, destabilized the tax system, and undermined the checks and balances that came out of the American Revolution against monarchical despotism. Corporate control left us totally unprepared and defenseless against pandemics that our public health officials, scientists, and yours truly warned about for years.

The problem is that too many voters have lost confidence in themselves as the sovereign authority in our constitution (“We the People”) and did not listen to Bernie Sanders, an honest and dedicated elected U.S. Senator, who has been so truthful and right for forty years. 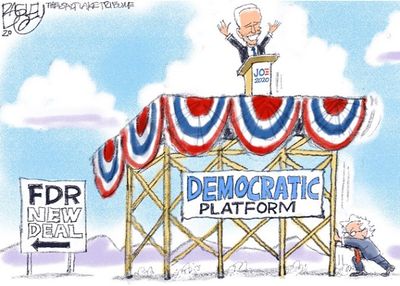 I wonder if this might bring us to a universal basic income. It would have helped keep the economy stable...and probably cost less than $2trillion plus..

I wonder if this might bring us to a universal basic income. It would have helped keep the economy stable...and probably cost less than $2trillion plus..

When I first heard of Andrew Yang's Freedom Dividend I thought someday we, and countries around the world will eventually have some sort of basic income.

Yang's Freedom Dividend was a response to the increasing automation that will inevitably take away one in three jobs from American workers over the next decade. Yang’s plan would distribute $1,000 to each American adult every month ($12,000 per year), which is known as a “partial dividend,” enough to help but not enough to fully support adults and cause them to stop working.

There are currently no countries which have a universal basic income model in place. There are many debates, movements, and discussion for them around the world, and even some experiments.

Since the U.S. is the only major country in the world which doesn't have universal healthcare I don't expect us to be the pioneer in universal basic income.

The country with a system closest to universal basic income is Norway.  Norway is a welfare state, ensuring that all Norwegian citizens residing in the country have access to certain fundamental goods, including access to education, health care, and income in the form of social security or benefits. Norway, however, has specific conditions to be met in order to receive these benefits from the government, such as requiring citizens to try and find a job, be law-abiding, participating in elections and paying taxes.

In 2018, Finland conducted a basic income experiment with 2,000 randomly selected unemployed citizens. The recipients were given 560 euros ($640) monthly and reported being happier and in better health.

They also reported that, although the amount was only 50 euros more than what they were previously receiving from unemployment benefits, there was no reporting in order to receive the income.

The rise of Corporate Oligarchs replacing democratically elected Government can be traced to a single "innovation" of modern Capitalism - OUTSOURCING.

While this mania to make every step in the production process the most profitable it can be, there is no longer any redundancy, no "back up" when the supply chain is disrupted. If a sweatshop in China can suddenly NOT provide spindlewidget "A", the entire system grinds to a halt. The loss of demand by the producer (no more orders for the rest of the spindlewidgets  in the process) then closes more sweatshops, and that closes their customers who need those widgets. This happens much too quickly for the production functions to find alternative sources of supply, and exposes everyone to sudden violent swings in the output of goods and services - aka Global Depressions.

But even when the new "just in time delivery" works flawlessly, it redistributes income from the workers (bottom 90%) into thepockets of the managers (top 10%). The reason a Chinese or Bangladeshi worker costs less is their cost of living is less. What basic necessity would require an American worker to spend $10 can be had in the 3d World for $5, so using the low cost labor more than makes up for additional shipping costs. Thing is, the CUSTOMER for the goods produced does NOT see the price dropping. The "extra" $5 less shipping goes to the top 10% because they are the ones dividing the profits.

And the Corporate Oligarchs no longer have to send the work half way around the globe to find that "labor cost differential" - they can get it right here via the "gig economy".  Whenever a job is "outsourced", the former full time employee of the company loses their job, their pay check and their benefits that generations of UNIONIZED workers have fought for an won for the workers - overtime pay, retirement, paid sick leave and vacations, medical benefits - all GONE for the "gig worker" who on top of getting less per hour has to pay ALL their Social Security and Medicare, finance their own retirement, and acquire insurance AND figure out how to save enough to see them thru breaks in their employment, which leaves them with NO net savings at the end of the year, hence no retirement beyond SS.

Our Grandparents would not stand for being so "illused" by their employers, and would've formed unions and seen thier incomes and future well being enhanced every year. But Republicans, using propaganda machines like Fox, have convinced today's workers Unions are bad for them because of the Union Dues, or for the racists its also the fact Unions prevent discrimination against non-Whites because ALL Union workers get the same treatment - pay and benefits.

Covid19 MAY have given us a way out of the ever-increasing income inequality. By DEMANDING an end to outsourcing, and the whole gig economy, we just might restore the wonderful economy we enjoyed from the late 1930's until the late 1970's when WORKERS got 96% of their increased productivity returned to them as higher pay and better benefits, instead of getting 4% with the rest going to the Oligarchs.

The rise of Corporate Oligarchs replacing democratically elected Government can be traced to a single "innovation" of modern Capitalism - OUTSOURCING.

I began witnessing firsthand the outsourcing by the company I was working for in the 1980's and continued until I left in the late 1990s.

Our company began manufacturing some of their products in Germany, Japan and Ireland. It was a slow, gradual process. This was happening during the Bush Elder years, then Bill Clinton years.

I don't know who exactly to "blame", but I do believe, since outsourcing appears to be inevitable, we should have better safety nets to offset the suffering from outsourcing.

So why is this happening to the majority of Americans? Oligarchs....follow the money.

I was surprised this article came from The Street (Wall Street).

There are plenty of downsides to an oligarchical government or management structure.
Oligarchies can tend to skew decisions and policies to benefit themselves.
In that manner, oligarchies tend to increase income inequality, which helps the oligarchy grow in power and wealth. Along those lines, oligarchies can often manipulate the financial markets to their advantage.
Additionally, oligarchies can perpetuate bad policies by keeping those who are similar to them (or like-minded politicians) in power, which can create an unhealthy corporate or government community.

Is the United States an Oligarchy?

Some have argued that the United States is actually an oligarchy. And, according to a study published in 2014 by Princeton University Professor Martin Gilens and Northwestern University Professor Benjamin Page, some researchers believe so.
The pair concluded that, "Americans do enjoy many features central to democratic governance, such as regular elections, freedom of speech and association, and a widespread (if still contested) franchise.

But we believe that if policymaking is dominated by powerful business organizations and a small number of affluent Americans, then America's claims to being a democratic society are seriously threatened."

Still, Gilens insists that despite often sharing goals, one side seems to get the shorter end of the stick.
"Affluent and ordinary citizens frequently want the same thing. But when they disagree - and they do disagree on many important matters - the affluent generally get their way," Gilens said.

2 Kudos
115 Views
0
Share
Report
Reply
Turn on suggestions
Auto-suggest helps you quickly narrow down your search results by suggesting possible matches as you type.
Showing results for
Show  only  | Search instead for
Did you mean:
Users
Announcements