The Problem With Impeachment 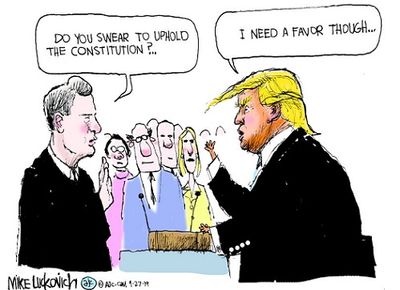 Wow. Those are some tiny hands! The sentiment seems about right, though.

Ditto to what Centrist said ........... trump may "bring the whole thing down". HIs threat of civil war and having the police on his side speaks volumes as to what this man will stoop to.  He has already formed a tear in the fabric of our society and will continue to rip away at it.

He must be stopped, but it seems an entire Republican Party will not stand up to him and many within that Party side with him. Those within the Republican Party that subscribe to the 'Deep State' conspiracy theory are a sign that some will never see or admit the truth about trump.

Trump, however, will not go quietly into this good night. He will attempt to bring the whole rotten edifice down with him. And he may succeed.

Indeed!  He's already suggested there will be a Civil War if he's impeached and falsely claimed the police will be on "his side".

The Problem With Impeachment

The Problem with Impeachment

Yes, Trump pressured Ukraine President Volodymyr Zelensky to give him dirt on Biden and his son, Hunter Biden, and there probably is some.

Yes, it appears the U.S. president withheld roughly $400 million in military aid to Ukraine in order to exert leverage over that government.

Yes, he attempted to block the release of the whistleblower report that detailed his conduct.

Yes, this is a violation of the law, one that many Democrats in Congress see as an impeachable offense.

But this kind of dirty quid pro quo is the staple of politics and international relations.

Hillary Clinton, as far as we know, was never on the phone to Steele.

Reagan, as far as we know, was never on the phone to the Iranian president.

Trump’s fatal mistake was that he was overt in his request and he made it himself.

This kind of underhanded pressure to damage political opponents requires skillful hints, secret meetings, carefully calibrated pressure and total deniability. Trump is too clueless to play the game. Because of this he looks set to join the exclusive club of presidents who were impeached—Andrew Johnson and Bill Clinton.

Trump, however, will not go quietly into this good night. He will attempt to bring the whole rotten edifice down with him. And he may succeed.

Report Inappropriate Content
Reply
6 Kudos
Turn on suggestions
Auto-suggest helps you quickly narrow down your search results by suggesting possible matches as you type.
Showing results for
Show  only  | Search instead for
Did you mean:
Users
Announcements