'The Swamp' has been a hot topic for some time now. The RRRR aim has been centered on corruption within the 'bureaucracy' which they mercilessly pillory.

Fact is the bureaucracy is an institution conducting the nations business.  Without it the Nation and all it's business could not run.

Some with so-called conservative views have said that public employment [bureaucrats] should be done away and replaced with contractors or term limits employees. It has even been suggested that career bureaucrats should not exist.  Their very existence being evidence that corruption within their ranks exists.  That is utter and complete nonsense.  Not only non-rational, but irrational. Garbage not worthy of recognition.

Fact is that it is people that are corrupt, not the institution which they are entrusted to run.  When someone refers to 'the swamp' they actually refer to the people within it.

That being said, in a swamp decaying and decayed matter sinks to the bottom and further decays. That forms rot and corruption.  That process generates a gas. You can't see the whole process from above until enough accumulates in one place and it rises to the surface in the form of a bubble.

When that bubble bursts, gas is released into the environment.  It stinks. It pollutes.  It is highly flammable. When ignited in a confined space, it explodes...sometimes with disasterous consequences.  Need I continue to make the comparison to our society and the people in it?  Have you 'got it' yet?

Seems to me that is an apt analogy to the current occupants of the confined space sometimes called Washington DC.  Although corruption is what the RRRR purports to be adamantly against, it seems to be corruption they have deliberately put in place.  I've heard it said that corruption breeds corruption.  I guess that's true.  There is always a reason things are as they are.

"The Swamp" has become another code word for "Conspiracy Theory to explain Trump's inability to govern".

"The Swamp" has become another code word for "Conspiracy Theory to explain Trump's inability to govern".

Based on the economy and other key points to this admin, wish this same inability could have manifest itself during the last admin. Another up day for the market. The new tax laws are becoming known and the left becomes more silent. More to come.

fangoh45:   Based on the economy and other key points to this admin, wish this same inability could have manifest itself during the last admin. Another up day for the market. 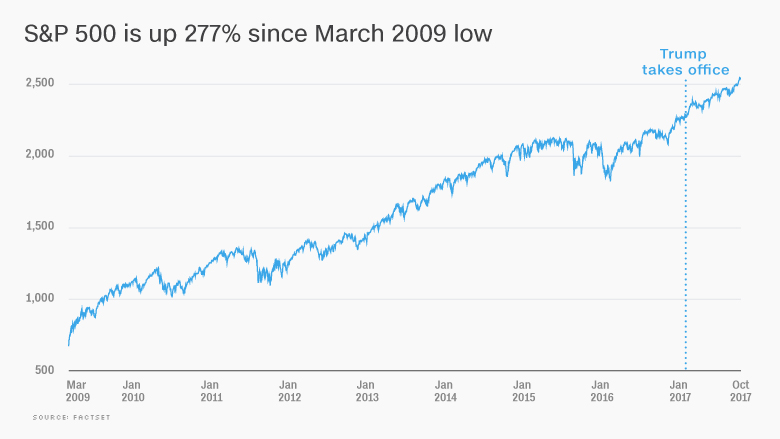 @Panjandrum—Yup, The cultists are too naïve to realize it, but when it comes to the stock market, trump is riding on Mr. Obama’s coattails.

But that doesn’t stop him from taking credit for something that he had nothing to do with.  It also doesn’t stop the propaganda sites that these ignorant followers consume from lying about the stock market, and,of course, it doesn’t stop the gullible cultists from believing the fantasy either.

It is really sad that a minority of the country has so little knowledge of what  has propelled our economy since the last Republican president, using the same misguided techniques that trump has once again reinstalled,, almost destroyed the American economy.

How many of those 103 bull market months does Obama own ( 92 )  , but of course our far right posters wont give Obama credit , but give trump credit for so few !!!

What a bunch of Hypocrites !!!

4 Kudos
1,257 Views
0
Share
Report
Reply
Turn on suggestions
Auto-suggest helps you quickly narrow down your search results by suggesting possible matches as you type.
Showing results for
Show  only  | Search instead for
Did you mean:
Users
Announcements