TRUMP'S ART OF THE LIE

NOTHAPPENING:  It is absolutely true that from 2009-2011, Democrats and President Obama had “total control” of the House of Representatives.

Your own article points out that you're lying. Wouldn't it be less embarrassing to read what you link to before posting? LOL

"But legislation does not become law without the Senate.

The Senate operates with the 60-vote-requirement filibuster rule. There are 100 Senate seats, and it takes 60 Senate votes for “closure” on a piece of legislation....to bring that piece of legislation to the floor of the Senate for amendments and a final vote....that final vote is decided by a simple majority in most cases. But it takes 60 Senate votes to even have a chance of being voted upon.

“Total control”, then, of the Senate requires 60 Democratic or Republican Senators."

Not Happee!!!ning said, "Obama left with a record surplus (remember that deficit is for one year) and a record DEBT! Obama doubled the debt from $10 trillion to $20 trillion in only 8 years! I doubt Trump will beat Obama's debt record!"

I wouldn't be too confident about the deficit under Trump which is growing rapdily thanks in part to the GOP tax bill.  Right you are CeeTee!!!  Fact is, it's already $27 TRILLION!!!  We;; over Obama's "record"!!!!!  It seems some are intentionally uninformed, CeeTee!

And many wonder why trump lies so much.....because there are many clueless Americans who gorge on his vile spew.

Wrong as usual. The national debt is just over $21 trillion dollars.

Not Happening said, "Obama left with a record surplus (remember that deficit is for one year) and a record DEBT! Obama doubled the debt from $10 trillion to $20 trillion in only 8 years! I doubt Trump will beat Obama's debt record!"

I wouldn't be too confident about the deficit under Trump which is growing rapdily thanks in part to the GOP tax bill.

Ask Not Happening which party controlled the House during the Obama Administration. That's right, the Republicans. The House controls appropriations and the federal budgets.

Okay, that’s the House during the first two years of Barack Obama’s presidency. For a lie to prosper, as it were, there needs to be a shred of truth woven inside the lie. It is absolutely true that from 2009-2011, Democrats and President Obama had “total control” of the House of Representatives.

The only twisted and demented are you and the democrats. Attacking people in restraunts, shooting people playing baseball, burning limos, throwing rocks, bricks, and stealing office equipment. Now that is deranged! Saying something and following through with violent acts are two different things. The democrats are simply vile, vulgar, and violent!

lol, you mean like kickm them when they are down loser.

Typical far right answer. Keep in mind what the experts have told us about the far right followers.

The fact of the matter is Trump lies faster than a rat can run!

Typical far right answer. Keep in mind what the experts have told us about the far right followers.

No Riots Over Sanctuary Cities

2. “I don't want to lose a million jobs, I don’t want to lose $110 billion,” he said, referring to an arms deal that has actually only earned $14.5 billion so far. “But it’s really $450 billion if you include other than military

On March 20, 2018 when the Saudi crown prince visited Washington, Trump claimed the arms deal would generate “over 40,000 jobs in the United States.”

3. “He’s not Lyin’ Ted anymore, he’s Beautiful Ted. I call him Texas Ted,” he said over the roar of helicopter blades, extolling the virtues of a man whose wife he’d insulted in the past.

A reporter reminded him that he’d once accused Cruz’s father of being involved in the J.F.K. assassination, to which Trump replied: “I don’t regret anything, honestly. It all worked out very nicely.”

Reporter: You said “lower tax cuts.” You said that you wanted tax cuts by November 1. Congress isn’t even in session. How is that possible?

Trump: No, we’re going to be passing—no, no. We’re putting in a resolution sometime in the next week, or week and a half, two weeks.

Reporter: A resolution where?

Trump: “We’re going to put in—we’re giving a middle-income tax reduction of about 10 percent. We’re doing it now for middle-income people. This is not for business; this is for middle. That’s on top of the tax decrease that we’ve already given them.

Reporter: Are you signing an executive order for that?

Trump: No, no, no. I’m going through Congress.

Reporter: But Congress isn’t in session, though.

Reporter: Congress is out.

I think that a real possibility for trump, his lies and why he is so convincing to all of his weak minded base...a reason for trump telling the same lie over and over, is that it is a form of self hypnosis. The more that he tells it, the more that he himself believes it. He convinces himself that a lie is actually the truth in his mind!

He is twisted and demented. Many of us see thru him, but his base just laps it up like he is the new messiah. They refuse to see that he wants to take them down along with himself, and he will go down at some point. Even jim jones went down, he just took many along with him. 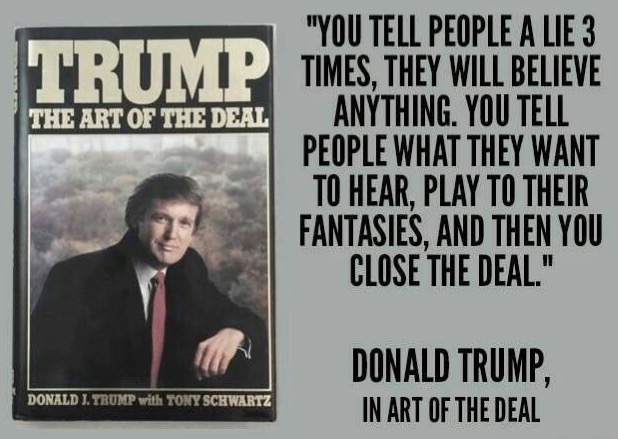 These are Trump's own words.  You folks are being played by a master liar!

Trumps "game" only works on the ignorant.  Though it IS effective.  They should be proud....and they are!


"FAKE 45 #illegitimate" read a sign at the Woman's March in DC, 1/27/2017
Report Inappropriate Content
2
Kudos
187
Views
Reply
2 Kudos
Turn on suggestions
Auto-suggest helps you quickly narrow down your search results by suggesting possible matches as you type.
Showing results for
Show  only  | Search instead for
Did you mean:
Users
Announcements