@n566192lsaid
Please act like the President and get things done.   Hurricane Florence is done enough, Trump should not add to the suffering.

We can always have hope because the damage has been heart breaking. I have a girlfriend in Charleston, S.C . They all need our prayers.

The darn thing is heading north so we may get some rain from it, but not like down south.

Refer to the 2016 electoral college voting results map.  Available on the internet under that title.  Florida, Georgia, South Carolina and North Carolina show up red.

Donald John Trump won the electoral college vote in 2016. Puerto Rico's voting results in 2016 were meaningless and will be so again in 2018 and 2020 unless something changes to bring these people into full citizenship status.

Having carefully watched the behavior of Donald John Trump since he was first mentioned as a potential candidate for POTUS, I personally conclude that he will do anything at all to achieve what he wants however he needs to .  AND will waste little time, if any at all, on what he judges does not help get him there.  I have called this man cynical among other things.

The media interviewed an elected official from the red states prior to Florence making landfall.  He lauded the advance cooperation and preparation by Federal, State and Local Agencies. He lauded FEMA and all the ancillary disaster agency and business preparations.  He lauded the caring neighbor efforts throughout the communities likely to be affected.  Grass roots stuff....the American Way.  All of which could have been done in Puerto Rico when leadership was needed.  Why was it missing?  Virtually the entire Donald John Trump administration was nowhere to be seen.  Why was that?  Why the lies afterwards?

I have my suspicions about that and I suspect you do too. Puerto Ricans are Americans. It would be nice if Americans would treat Americans like Americans.  I'd say it a different way, though.

ALL the people who live in the Americas are Americans.  Some are United States of America Citizens. That includes Puerto Rican Americans.  They have Citizen's rights.

Take off your political blinders before November 6, 2018.  This one matters a whole bunch.  Given the difference the record shows, it truly is a matter of life and death.  The evidence in the record speaks for itself.  Your choices can fix what's wrong.  I sure hope you'd like to do that.

I will really need a new spleen, if your post comes true. Please update me on the status thanks, Olderscout66. Nancy

After researching the IQs of his base, the Trump Team decided this time instead of paper towels, Der Trumper will throw those saran-wrap quality rain ponchos - much cheaper than towels, and his base will think the fact they are not intentionally one-use, it means lil donny really cares for them. 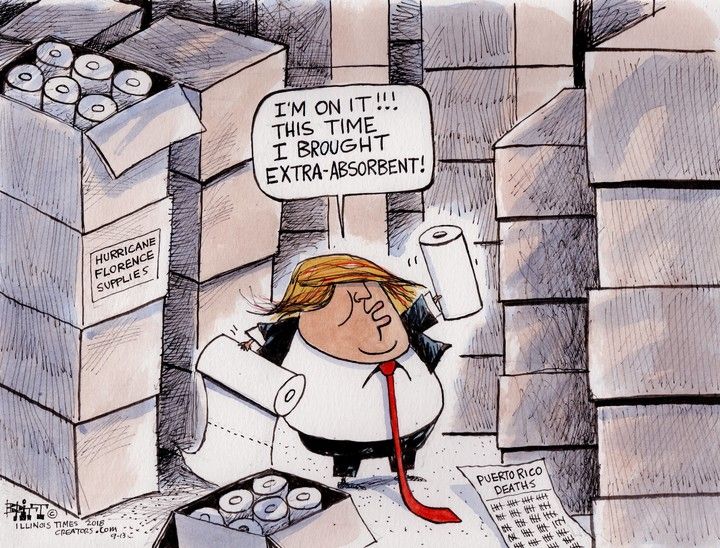 Probably just to check out the golf courses.

Oh LORD I'm just wondering what he'll take for the people this time that will be better than throwing towels at them?

Live For Today, No One is Guaranteed a TOMORROW !
Report Inappropriate Content
3
Kudos
430
Views
27
Replies
Reply
3 Kudos
Turn on suggestions
Auto-suggest helps you quickly narrow down your search results by suggesting possible matches as you type.
Showing results for
Show  only  | Search instead for
Did you mean:
Users
Announcements