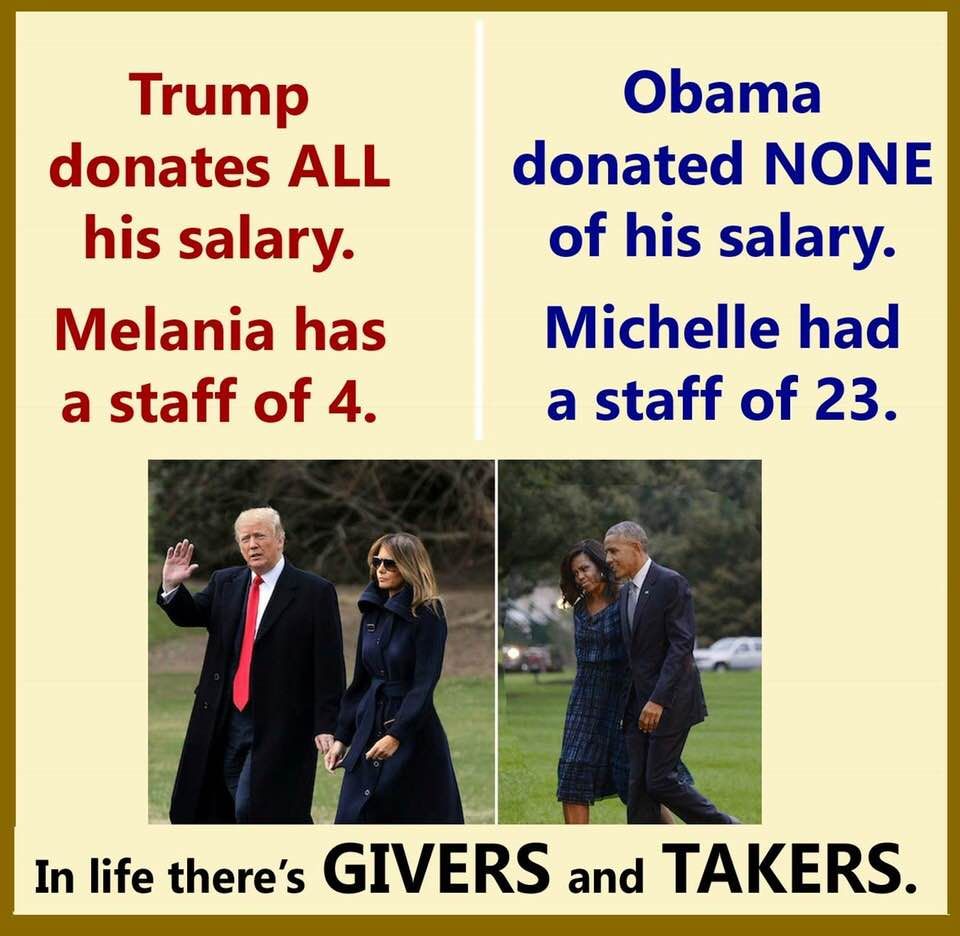 Yes, there is a difference between the two presidents. If Trump had done this, he would have called a presser in the Rose Garden to brag about it.........but only after telling us for the 99th time how his inauguration crowd was the biggest ever, and he's the most amazing president since Washington.   Obama Has Written Personal Checks To Struggling Americans

WASHINGTON — Got problems? Tell Barack Obama. He can help. He might even give you money.

On more than one occasion, the president has cut personal checks to struggling Americans who’ve written to the White House, according to an excerpt from a new book by Washington Post reporter Eli Saslow about the ten letters the president reads every day.

“It’s not something I should advertise, but it has happened,” the president told Saslow.

@Soosie- provide links that detail exactly where every penny of trump's salary has gone - that is - if you want people to believe that the allegations in your post are in fact "the truth, the whole truth, and nothing but the truth"...

Soosie
Honored Social Butterfly
@Alferd, when I have asked a question such as yours, I have been told to look it up.
1 Kudo
384 Views
2
Share
Report
Reply

@Soosie wrote:
@Alferd, when I have asked a question such as yours, I have been told to look it up.

In other words there is no proof available to support your bogus claims.

@Soosie wrote:
@Alferd, when I have asked a question such as yours, I have been told to look it up.

I did - where every penny of trump's salary from has not been disclosed by trump himself, the WH, or any member of the trump administration - leading to a probable logical conclusion that "dishonest jiggery pokery" - all too typically characteristic of trump's speech and actions has once again taken place.

Pehaps links to Fox, Breitbart, Info Wars or truth-telling Jared can be cited as sources of fact-based evidence...

I suspect that's another cartoon with highly inaccurate information. But let's go out on a limb for just a moment and assume it's accurate.

Oh good, I guess that means this thread will hereby be devoid of unsubstantiated assertions and personal opinion foisted about as fact, eh?

"The key to success is to keep growing in all areas of life - mental, emotional, spiritual, as well as physical." Julius Erving
1 Kudo
375 Views
0
Share
Report
Reply
Turn on suggestions
Auto-suggest helps you quickly narrow down your search results by suggesting possible matches as you type.
Showing results for
Show  only  | Search instead for
Did you mean:
Users
Announcements