Re: TERRORIST ATTACK ON LONDON BRIDGE

149 Dead So Far In Ramadan Attacks

Significant terrorist attacks have sprung up across the globe since the beginning of Muslim holy month of Ramadan May 26, with current counts confirming three attacks and 149 dead, and a reported Saturday incident on London Bridge still developing.

Islamist terrorist groups usually use the holiday to mount more significant terrorist attacks, and promise their followers extra benefits for dying in such attacks during the holy month.

The major attacks of Ramadan 2017 include twin suicide bombings in Baghdad and a massive suicide borne vehicle bomb in Afghanistan. An unconfirmed terrorist incident also occurred at a casino hotel in Manila earlier this week. These attacks occurred before a reported deadly incident on London Bridge Saturday.

The Baghdad bombings targetedboth an ice cream shop and elderly pension distribution center. The ice cream shop was frequented by families with small children and killed 10. The first bombing killed 12, and nearly 100 were injured between the two blasts.

Jihadi terrorists shouting 'this is for Allah' kill seven in knife frenzy at 'FIVE' locations in the capital: Hunt for men with 12in blades who began the rampage by mowing down revellers on London Bridge

By Ekin Karasin For Mailonline 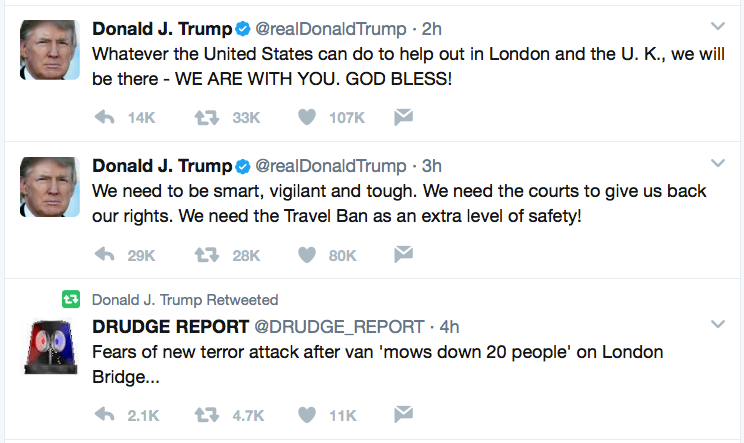 VIMTSTL
Report Inappropriate Content
Tags (1)
Reply
1 Kudo
Turn on suggestions
Auto-suggest helps you quickly narrow down your search results by suggesting possible matches as you type.
Showing results for
Show  only  | Search instead for
Did you mean:
Users
Announcements