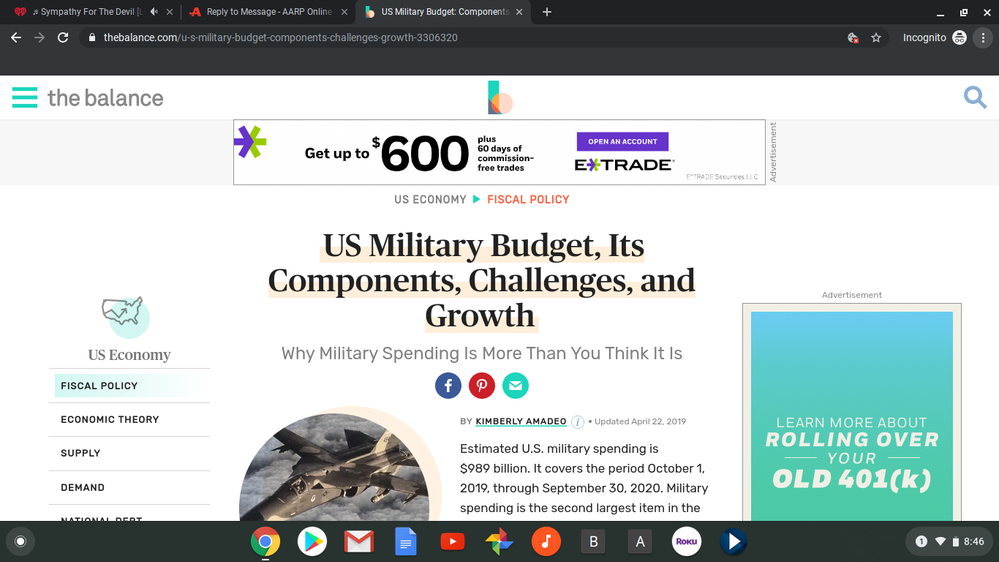 From The Balance.com image #1 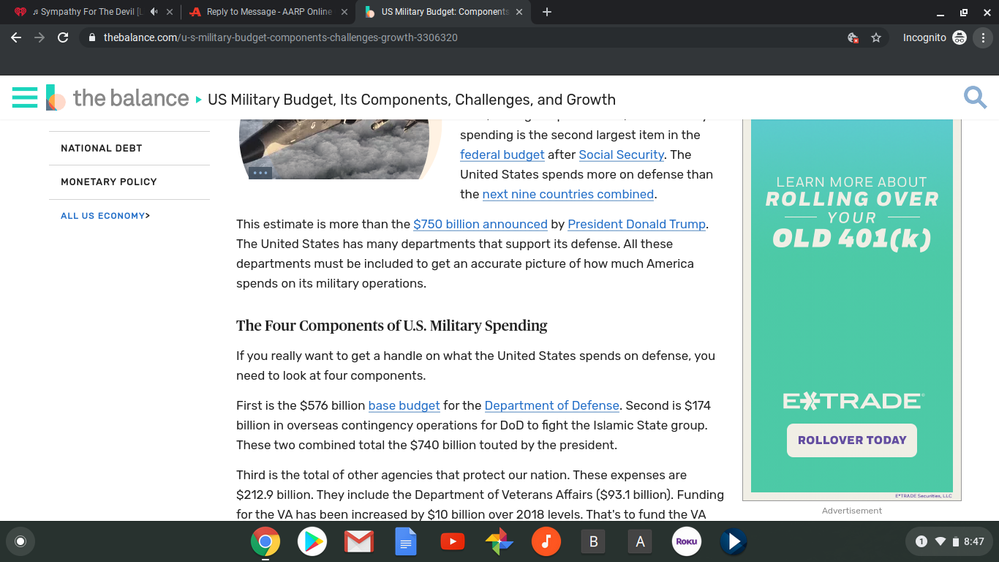 From The Balance.com image #2 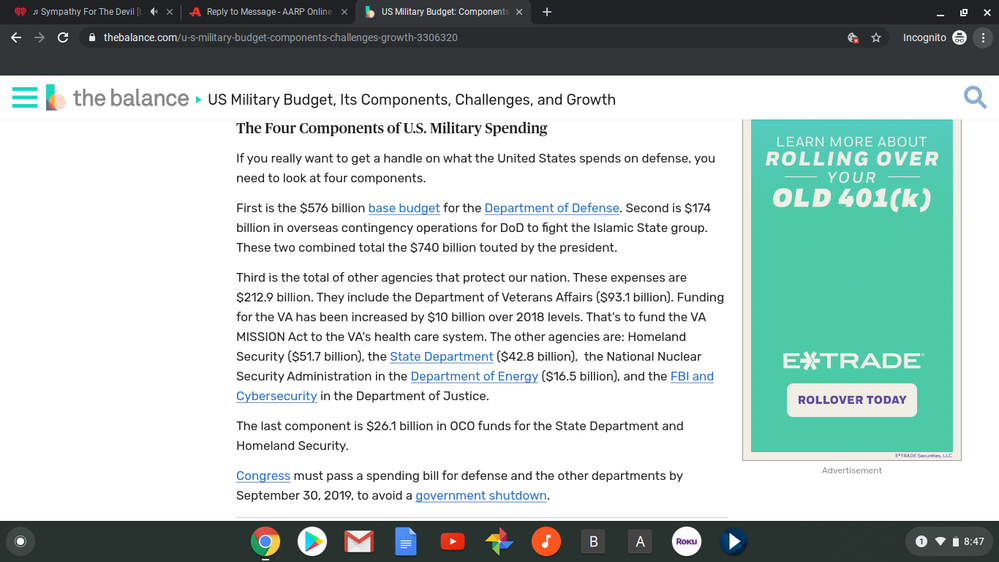 From The Balance.com image #3 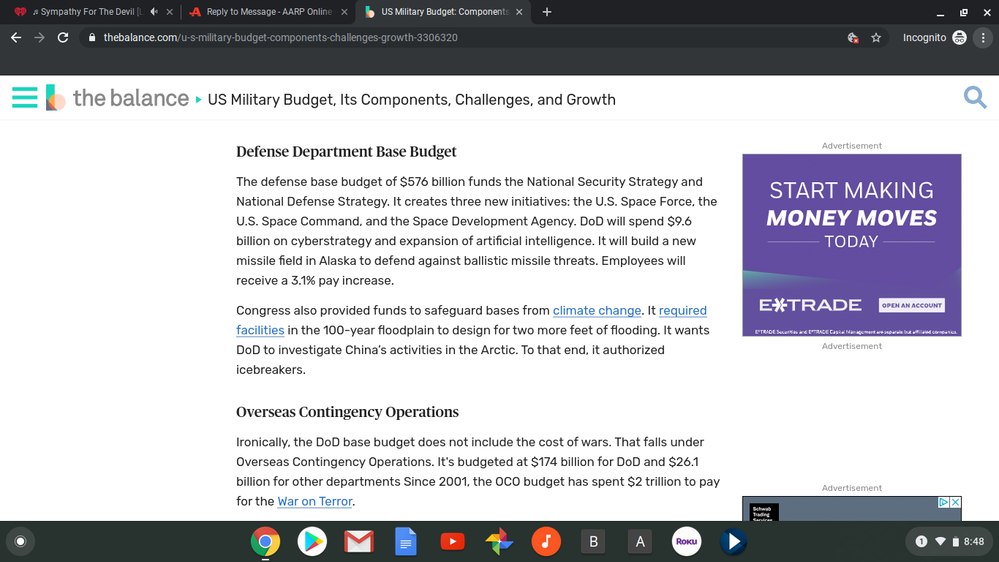 From The Balance.com image #4 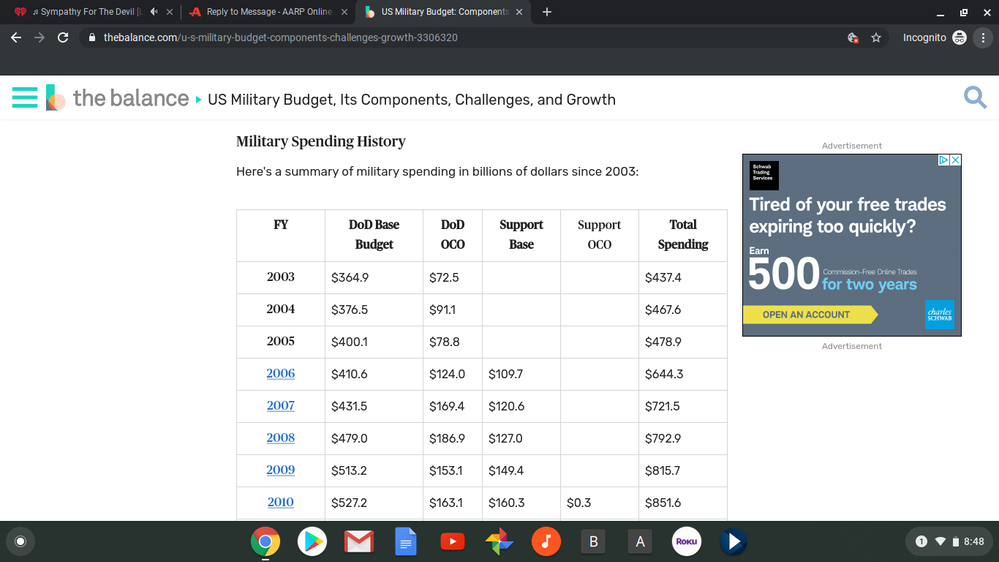 From The Balance.com image #5 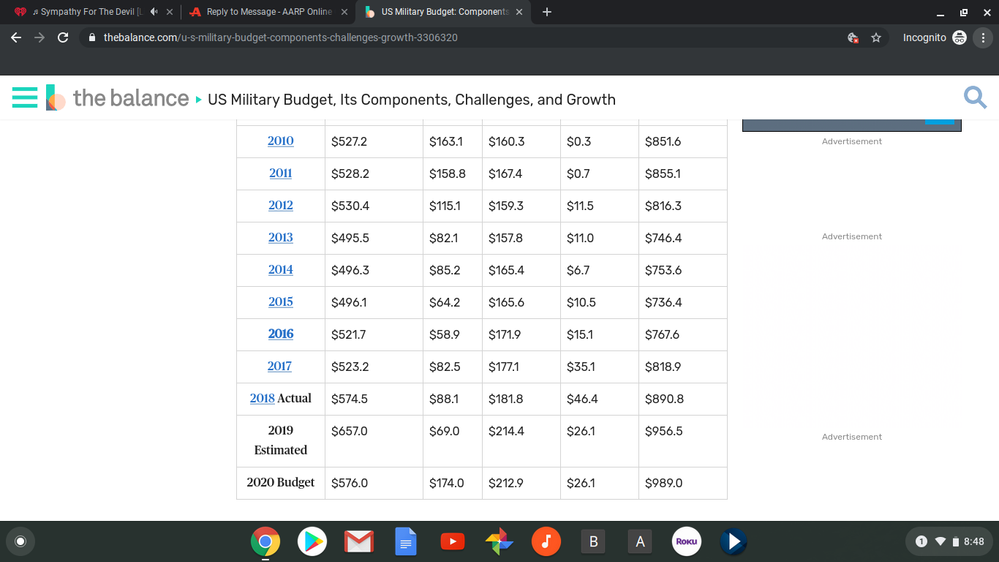 From The Balance.com image #6 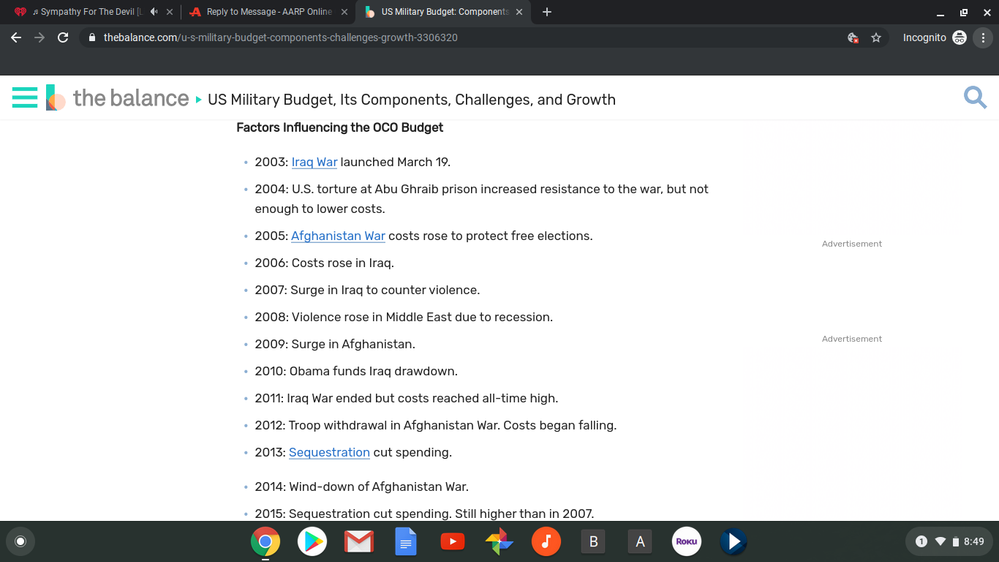 From The Balance.com image #7 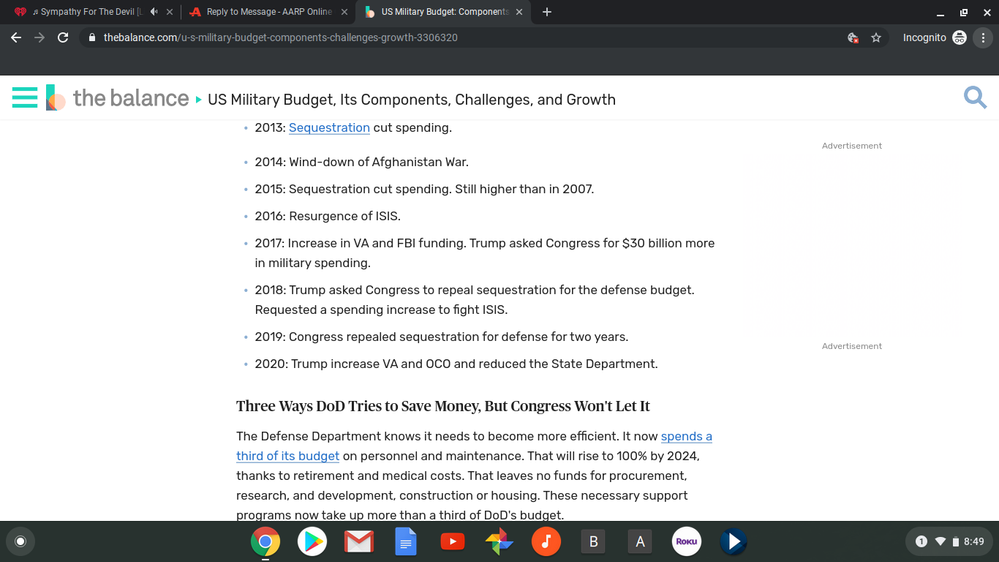 From The Balance.com image #8 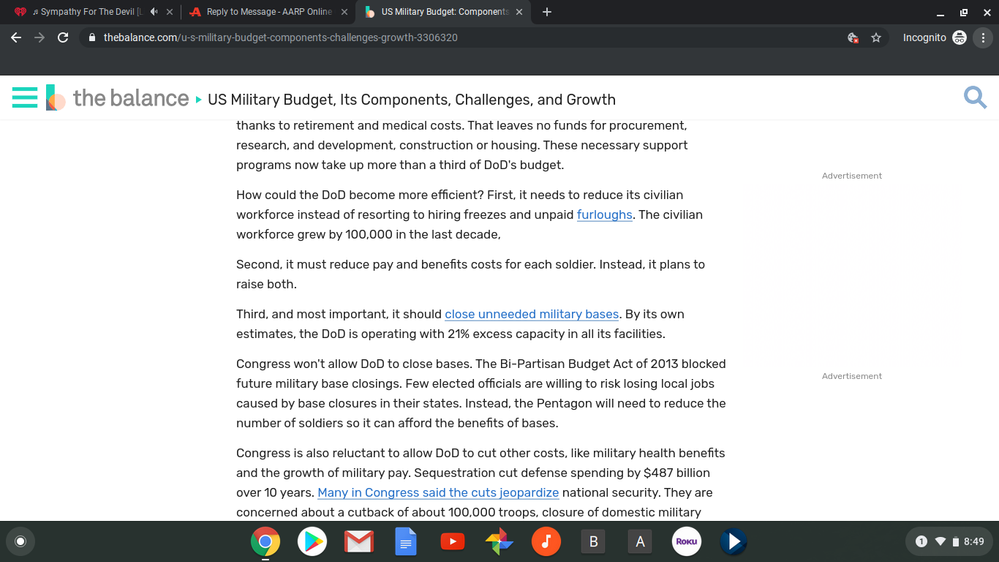 From The Balance.com image #9 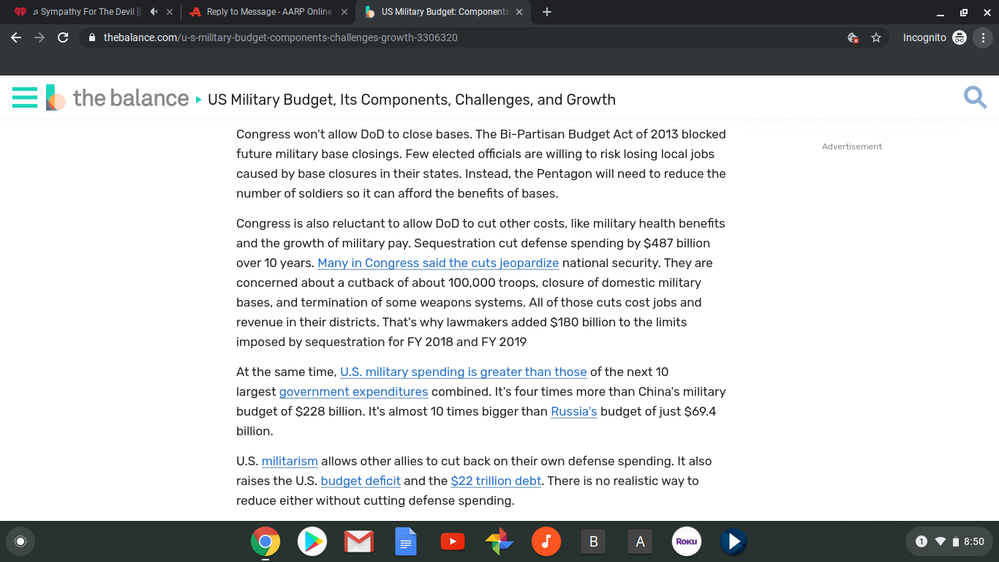 From The Balance.com image #10

from #3:  $26.1 billion for OCO/State Dept and Homeland Security

>Oh.....the DoD budget does not include the costs of wars. That falls under the OCO (Overseas Contingency Operations).....

#10:  US Military spending is 4x more than the Chinese and 10X larger than Russian

Trump has already tried to do both, and is still trying

The bigger issue is the payroll tax.  We could fix all this if the payroll tax had been raised 2.7 percent over the last thirty  years.  We could have raised or eliminated income caps to compensate for the effects of automation.

Republicans won't do it, they block any tax increase.

The only was the American people can address the problems of Social Security, short of just letting it whiter away, is to vote Republicans out of office,

If Republicans don't rig elections and block the voting process first. Republicans have tried and will try to do that. again.

Another scare tactic by the left about Social Security and Medicare. Trump is not going to gut either one but wants to preserve for those who paid in it for over  40 years. Those who promote Medicare for all are the ones who will destroy one or both programs. Social Security and Medicare are predicted to go broke in the next 20 or 30 years if not fixed . Medicare for All will hasten it `s demise to about 5 years and will rob the seniors and the disabled who really need it.   Those who say the rich will pay for it are mistaken .  The fact is that  if you confisicate 100%  of the wealth of the rich it would only keep the government running for about 3 weeks.

Trump has already tried to do both, and is still trying. His court suit against the ACA would create problems for Medicare. Your drug costs would go up as that part would revert to what is was before the ACA. The amount of money Insurance Carriers get for their medicare adv. programs would go up. These are just 2 and the cost of health care goes up which hurts medicare. In SS Trump has been trying to cut the way the yearly inflation adj. is made is one example. The far right has opposed these programs from day one, and would kill them in a second if they could. If Dictator Trump is around after 2020 both programs will end as we know them, and all but the rich will be hurt. It is sad to see the Trump supporters not understand they are pushing for their own road to poverty by not voting for the countries interest and their own. When you say paid into it for 40 years it shows you do not understand the programs. They covered all people quickly when they came into being. That means they are costed for the current working people to pay for the current people using the program.

Another scare tactic by the left about Social Security and Medicare. Trump is not going to gut either one but wants to preserve for those who paid in it for over  40 years. Those who promote Medicare for all are the ones who will destroy one or both programs. Social Security and Medicare are predicted to go broke in the next 20 or 30 years if not fixed . Medicare for All will hasten it `s demise to about 5 years and will rob the seniors and the disabled who really need it.   Those who say the rich will pay for it are mistaken .  The fact is that  if you confisicate 100%  of the wealth of the rich it would only keep the government running for about 3 weeks.

Cutting Social Security benefits in the face of severe shortfalls in retirement income would hurt most Americans. As my colleague Tony Webb recently pointedout  in an episode of my podcast Reset Retirement, one-third of retirees are dependent on Social Security for 90% or more of their income, and over 60% depend on the program for more than half of their income.

As Social Security expert Nancy Altman recently testified, Social Security is essential to the American retirement system. It is the base on which we all secure our retirement incomes. As Altman pointed out, “Social Security made independent retirement a reality. Prior to its enactment, the verb ‘retire’ did not mean what it means today.”

Preserving and expanding Social Security isn’t just an economic issue—it’s a civil rights issue, as Maya Rockeymoore Cummings and Meizhu Lui have argued. Due to the racial wealth gap, as well as the fact that minority workers have worse jobs and relatively lower employer pension

coverage, non-white workers have a unique reliance on their Social Security benefits in retirement.

Given the dimming outlook for many American retirees, we must expand Social Security, not cut or privatize it—no matter what the deficit is. The greatest irony in Republican’s “starve the beast” mentality is that Social Security does not even affect the deficit. So perhaps it’s not really about the deficit after all.

Donald Trump won’t say it, but Republicans in the Senate will: Social Security and Medicare would be on the chopping block in a second Trump term. Pointing to rising deficits, Republican senators have all but promised to gut entitlements if Trump gets four more years.

Sen. John Thune (R-SD), the second-ranking Senate Republican, expressed hope to the New York Times that Trump would be “interested” in reforming Social Security and Medicare. Sen. John Barrasso (R-WY) was even more optimistic. “We’ve brought it up with President Trump, who has talked about it being a second-term project,” Barrasso said. Senate Leader Mitch McConnell (R-KY) has made no secret of wanting to cut Social Security.

In using deficit fears to target entitlement programs, many Republicans are hoping to use Trump's se... First, expand deficits through tax cuts, then declare that spending must be slashed. The chief target of these proposed cuts is Social Security, which historians have noted the mainstream Republican party has long sought to diminish, privatize, or both.

Senate Republicans’ talk of entitlement cuts come in the context of new estimates from the Congressional Budget Office, which predicts the deficit will climb to $1 trillion in 2020. By 2029, the deficit relative to GDP is slated to reach the highest levels since World War II—an unprecedented deficit level for an economic expansion, when deficits tend to shrink.

Since past behavior is a good predictor of future behavior,  and many Republicans are signaling they want to, Republicans will likely argue for cuts to Social Security and Medicare when a recession inevitably hits. This can be seen as a reprise of the tactic known as “starve the beast.”

“Starve the beast” is a political two-step that first generates deficits through tax cuts and, second, points to the alarmingly high deficits to attack government spending and reduce entitlements. Credited to an unnamed Reagan administration official in 1985 and long associated with Reagan economic guru David Stockman, the notion of “starve the beast” emerged from around the time of Reagan’s 1981 tax cuts, which were not paired with simultaneous spending reductions.

Reagan held that higher deficits would naturally lead to budget reductions: “We can lecture our children about extravagance until we run out of voice and breath. Or we can cure their extravagance by simply reducing their allowance.”

Today, you can see the “starve the beast” tactic clearly in the 2017 tax cuts—the main cause of the projected record deficits—to future spending cuts. Trump’s top economic adviser Larry Kudlow, a veteran of the Reagan administration, has made this argument himself. He explicitly invoked “starve the beast” in a 1996 Wall Street Journal op ed:

"Tax cuts impose a restraint on the size of government. Tax cuts will starve the beast… Specifically, tax cuts provide a policy incentive to search for market solutions to the problems of Social Security, health care, education and the environment."

It would be no surprise to learn that Kudlow, who now heads Trump's National Economic Council, is pursuing the same course today.

The quest to privatize Social Security

In his 2016 campaign, Donald Trump said bluntly, “I’m not going to cut Social Security like every other Republican.” Despite reports from fellow Republicans like Thune and Barrasso that Trump may, indeed, be just like every Republican in a second term, some on the right think it’s best that he keep that promise.

Among those urging caution is longtime Republican strategist Grover Norquist, famous for his libertarian credo, “I don't want to abolish government. I simply want to reduce it to the size where I can drag it into the bathroom and drown it in the bathtub.” After the 2017 tax bill passed, Norquist cautioned Trump that Social Security and Medicare should be “off the table” in future spending reductions.

But to follow Norquist’s advice would go against the momentum of a conservative movement that has been gaining steam since the 1980s in their quest to cut or privatize Social Security.

Republican opposition to Social Security goes back to the program's earliest days. In the 1935 vote to create Social Security, just 4% of Democrats voted against the bill, compared to 16% of Republicans. The contemporary Social Security privatization movement originates in the conservative Cato Institute, which in 1980 sponsored a book that advocated for privatization. The book's author, Peter Ferrarra, went on to serve in the Reagan administration.

Advocates for dismantling Social Security knew they faced an uphill climb. In the 1980s, Cato and the Heritage Foundation published a paper, "Achieving a 'Leninist' Strategy," which promoted "guerrilla warfare against both the current Social Security system and the coalition that supports it" by creating "a focused political coalition" against Social Security advocates.

Influenced by Cato and other groups, Republican presidents have repeatedly attempted to cut or privatize Social Security. Reagan’s efforts stalled in the face of public opinion. George W. Bush vowed in his second term to expend political capital on the initiative, aiming to cut benefits by partially privatizing Social Security through the introduction of “voluntary personal retirement accounts.” Although it was his top domestic priority, Bush too fell short.

But this history of failures hasn’t stopped today’s Republicans from pushing Trump to go after Social Security, the linchpin of the U.S. retirement system.

Report Inappropriate Content
Tags (4)
0
Kudos
483
Views
6
Replies
Reply
0 Kudos
Turn on suggestions
Auto-suggest helps you quickly narrow down your search results by suggesting possible matches as you type.
Showing results for
Show  only  | Search instead for
Did you mean:
Users
Announcements