Soros Group Has Given $1.5 Million To Organization Closely Linked To Fusion GPS

Robt Mercer clan donated millions to Cambridge Analytica....what is the point?    Shall we talk about the really big donation gang:  Koch Bros (before one died this year).

AG Barr on the Trump administration's initiative to combat crime

“George Soros has been coming in, largely in Democratic primaries where there has not been much voter turnout and putting in a lot of money to elect people who are not very supportive of law enforcement and don’t view the office as one that should be prosecuting criminals.”

Sounds like Soros is supporting the election of Trump cronies.

AG Barr on the Trump administration's initiative to combat crime

“George Soros has been coming in, largely in Democratic primaries where there has not been much voter turnout and putting in a lot of money to elect people who are not very supportive of law enforcement and don’t view the office as one that should be prosecuting criminals.”

jimc91:   A group George Soros operates gave $1.5 million in 2017 and 2018 to an organization closely linked to Fusion GPS and Christopher Steele.

Soros Group Has Given $1.5 Million To Organization Closely Linked To Fusion GPS 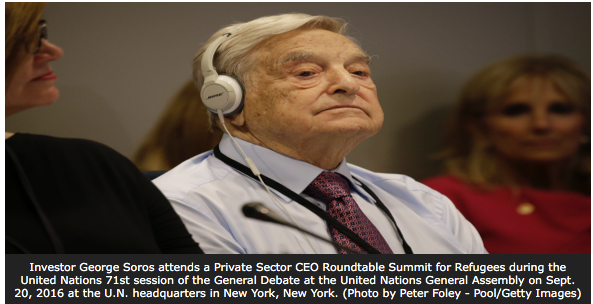 A nonprofit group progressive billionaire George Soros controls contributed $1.5 million in 2017 and 2018 to The Democracy Integrity Project, an organization that has worked closely with Fusion GPS and dossier author Christopher Steele to investigate President Donald Trump and Russian meddling in Western elections.

Soros’ group, Fund for Policy Reform, Inc., gave a $1 million grant to TDIP in 2017 and followed up with a $500,000 contribution in 2018, according to a database at Open Society Foundations, Soros’ network of nonprofits.

Soros is listed as chairman and director of Fund for Policy Reform, which contributes heavily to left-leaning groups like Planned Parenthood and the American Civil Liberties Union.

Both of the TDIP grants were for general operating expenses, according to the database. It has been previously reported that Soros gave $1 million to TDIP, but the additional $500,000 has not been publicized.

TDIP is the brainchild of Fusion GPS founder Glenn Simpson and Daniel Jones, a former staffer on the Senate Intelligence Committee known best for producing a report on the CIA’s torture program following 9/11.

Simpson and his Fusion GPS co-founder Peter Fritsch wrote in a book in November that Jones formed TDIP in late January 2017 after he and Simpson met to discuss how to continue investigating Trump’s possible ties to Russia, as well as Russian interference in Western elections.

TDIP’s activities and funding sources have trickled out slowly over the past two years.

House Intelligence Committee Republicans revealed in a report released on April 28, 2018 that Jones, who once worked for Democratic California Sen. Dianne Feinstein, told the FBI in March 2017 about his newly formed organization. He said that he had secured $50 million in funding from seven to 10 wealthy progressives in New York and California and was working with Steele and Fusion GPS.

At the time of Jones’ meeting with the FBI, the bureau was investigating Steele’s allegations, contained in his infamous dossier, that the Trump campaign was part of a “well-developed conspiracy of cooperation” with the Russian government.

In 2016, Fusion GPS and Steele provided leads from the dossier to a handful of reporters in Washington, D.C. The FBI also relied heavily on Steele’s information in applications for surveillance warrants against former Trump campaign adviser Carter Page.

But a Justice Department inspector general’s report poured cold water on the work of Steele and Fusion GPS. In a report released on Dec. 9, the inspector general said the FBI was unable to corroborate any of Steele’s allegations about Page and other Trump associates. It also said that Steele’s primary source of information disputed much of what Steele attributed to him in the dossier.

It is unclear if Steele relied on his same sourcing network for his work with TDIP.

Jones told the FBI that TDIP planned to provide information gathered in its investigation to the media, law enforcement and lawmakers. He also offered his research to the FBI.

TDIP’s 2017 tax filings show the group took in more than $7 million in revenue and paid Fusion GPS $3.3 million of that. The organization paid another $250,000 to a company owned by Steele, who is based in London.

The payments to Fusion and Steele far surpassed what both made in 2016 for the work on the dossier. Perkins Coie, the law firm for the Democratic National Committee and Clinton campaign, paid just over $1 million to Fusion GPS in 2016. Fusion in turn paid Steele just over $170,000.

An attorney who met with Jones in March 2017 first revealed TDIP’s Soros funding. The lawyer, Adam Waldman, told the Daily Caller News Foundation that Jones said he was working with Fusion GPS and that their project had received money from Soros and other wealthy donors. Jones also indicated in text messages to Waldman that he helped produce anti-Trump stories that ended up in the media.

Soros had given $1 million to TDIP and was considering donating more to the group, The New York Times reported in October 2018.

Simpson and Fritsch wrote in their book that TDIP investigated whether Russia interfered in the Brexit election, as well as in French, Italian and Hungarian politics.

The book also said that Fusion GPS and TDIP partnered in 2018 with a cyber analysis firm called New Knowledge to monitor Russian disinformation in the mid-term congressional elections. New Knowledge would gain notoriety after The New York Times reported that the company created fake online personas and used bots to post fake campaign-style ads on Facebook and Twitter ahead of the Alabama special election for Senate in 2017.

Despite its own involvement in a disinformation campaign, New Knowledge provided research for the Senate Intelligence Committee’s report on the Kremlin’s use of social media to sow discord in American politics.

Fund for a Better Future, a dark money group, contributed $2 million to TDIP in 2017, according to tax filings. The ultimate source of those funds is unknown. Fund for a Better Future is what’s known as a donor-advised fund, which means that it serves as a middleman for grants, and allows donors to shield their identities.

VIMTSTL
Report Inappropriate Content
Tags (4)
Reply
1 Kudo
Turn on suggestions
Auto-suggest helps you quickly narrow down your search results by suggesting possible matches as you type.
Showing results for
Search instead for
Did you mean:
Users
Announcements