So, why is auto insurance mandatory?

And then, of course, we have the cost of our healthcare system in relation to the rest of the world. 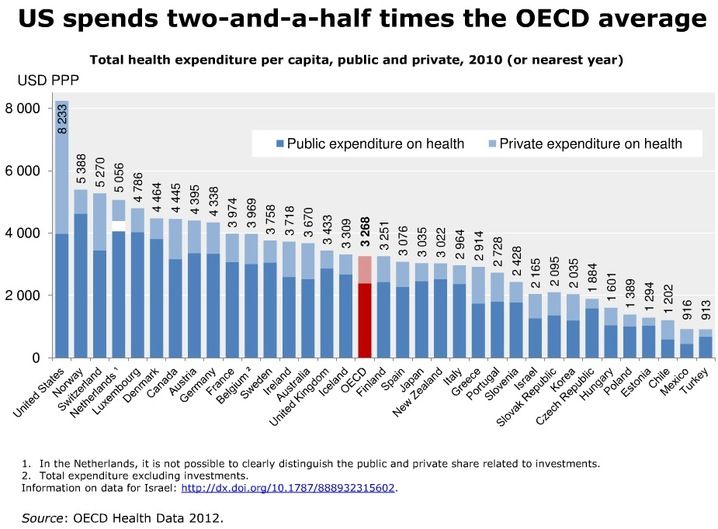 The point, of course, is not how we compart to Cuba but is our healthcare system working and one good way of measuring is to compare our infant mortality with other contries of similar means.  This graph is a comparison of our infant mortality rate against such countries.  All have universal health care and we did not. We have a "kind of" universal health care under the ACA but Republicans are working hard to cut those people out of the healthcare system while increasing costs. I just don't understand the Republican  drivers. 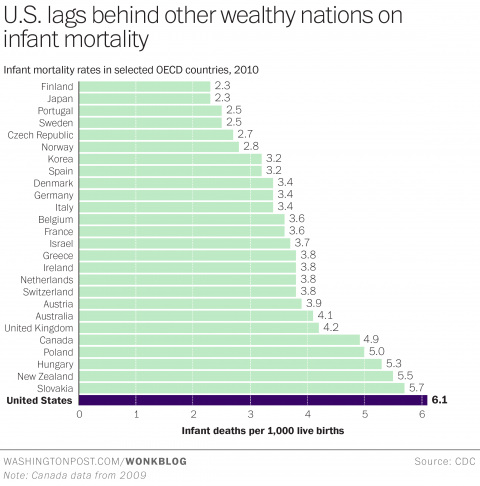 If our healthcare system is on par with a third world country that does not say a lot about us.  The infant mortality rate in Cuba before Castro is hard to impossible to quantify:

"The biggest shortcoming of Cuban mortality statistics in the pre-revolutionary era was, however, is

their incompleteness. In the city of Havana from 1901 to 1951, and possibly as far back
as 1835, death registration is thought to have been virtually complete (Foreign Policy
Association 1935: 95-97; Díaz-Briquets 1981: 400). The same cannot be said for the rest
of the country. González Quiñones and Debasa (1970: 14) used data from the 1943 and
1953 censuses to estimate the degree of incompleteness of death records across the country
as a whole in 1947, 1948, and 1949. They found that only about 57 percent of all deaths,
and only about 36 percent of under-5 deaths, had found their way into the vital registries.
Those who died without medical certification, and infants who survived for less than
24 hours, were omitted from the registries."
Report Inappropriate Content
0
Kudos
610
Views
Reply
0 Kudos
Highlighted

Health insurance is as much linked to being an American as life insurance.  As anyone can see, there is no linkage at all.  Liberals love mandating everything and love totalitarian governments.

Republicans orignally came up with the mandate for Health Care Insurance, so don't blame it on "liberals", unless those were "liberal conservatives" !!

That is a key distinction being missed.

Could be. We still don't have government provided, universal coverage which is how every other country keeps its costs down. I find it interesting that the Republicans keep this myth in their heads about how good and inespensive health care used to be. The statistics show a much different story.

In some cases we do, such as the VA. Considering recent revelations about it and the inability to do anything about those guilty, is that really what you want for all Americans?

If you want to compare us to Cuba, ask yourself two questions. 1) How many law suites are filed annually against their health care system. 2) When Cuban bureaucrats engage in "cooking the books" so as to get a bonus, what do you suppose would happen to them?

Trying to get the connection here. The number of lawsuits filed against doctors increases infant mortality?

No - high prices. What is your theory about infant deaths?

Arguing on hypotheicals is fun but if you do not drive a car in this country, you are a third class citizen.

Yes, mandatory auto insurance protects the other members of society against the damages your driving creates.

Manadory health insurance protects the other members of society against the damages your health creates.

Report Inappropriate Content
0
Kudos
636
Views
Reply
0 Kudos
Turn on suggestions
Auto-suggest helps you quickly narrow down your search results by suggesting possible matches as you type.
Showing results for
Show  only  | Search instead for
Did you mean:
Users
Announcements