Seven Make that Eight Damning Revelations From the IG Report

Tom5678;  sorry you didn't like the final report, but it came to the logical conclusion. The truth hurts for some it seems.

Did you notice that when this report came out Trump quit telling everyone to wait for the Horowitz Report and instantly started with "wait for the Durham Report"? He is totally predictable.

So are you of the opinion that the I.G. Report Horowitz release was a glowing complement to the FBI?

Horowitz has no power to prosecute or indict the bad actors, just report what they did.

U.S. Attorney John Durham has the power to convene a Grand Jury, and Indict the bad actors.  It looks like he is digging deeper than Horowitz did.

I hope the bad actors are indicted and stand trial in Federal Court for crimes against the Country.

Are you of the opinion they should go free?

Tom5678;  sorry you didn't like the final report, but it came to the logical conclusion. The truth hurts for some it seems.

Did you notice that when this report came out Trump quit telling everyone to wait for the Horowitz Report and instantly started with "wait for the Durham Report"? He is totally predictable. 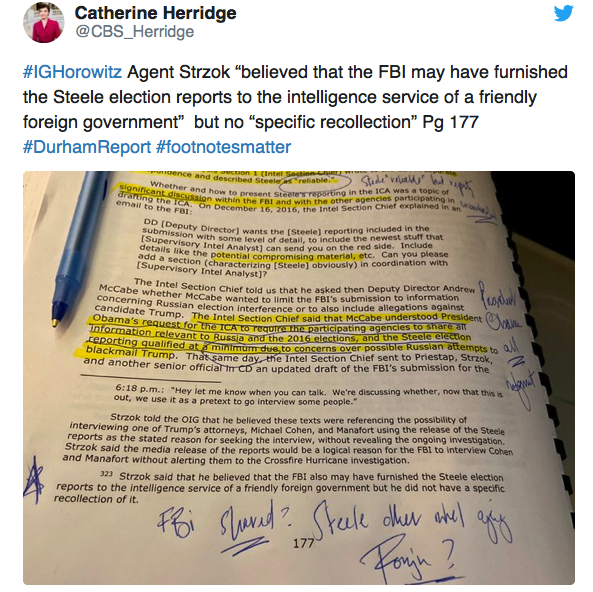 Well, we DEFINITELY need to get to the bottom of this!  This is simply OUTRAGEOUS, I tell you!  OMIGOD!  How dare a sitting president ask his agencies for information on Russian interference and the election?!   That's... that's downright spying!  No president is entitled to intel regarding national security, they need to rely on their gut instincts. 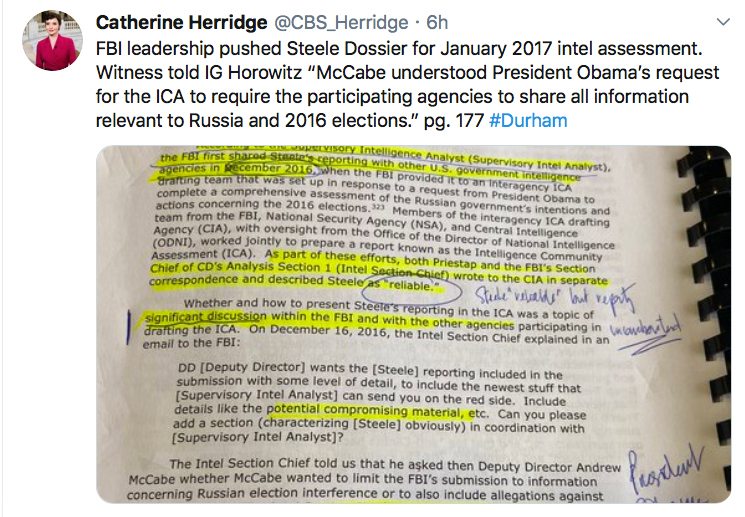 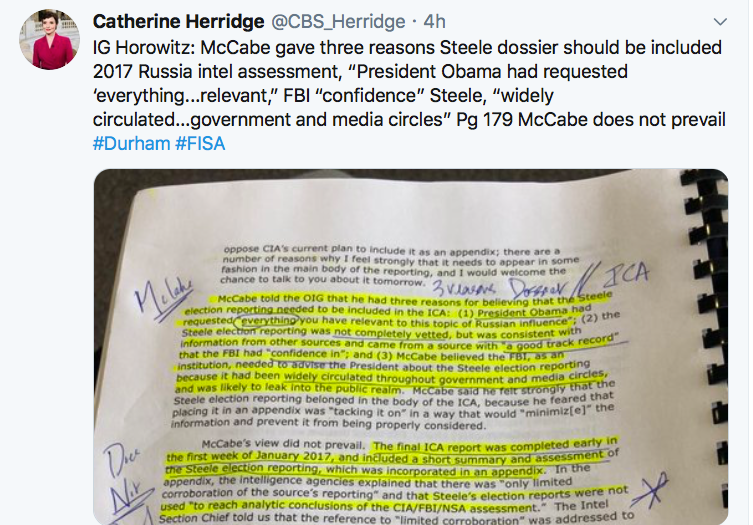 Page 177 Thru 179 of the Horowitz IG Report revelation.

What did President Obama know and when did he know it.  It looks like he was running Spygate!!

More nonsense. Will it ever stop from the enablers. You post what some one told the investigator. Well a lot of people told a lot of things to them, and that is why the IG comes to a final decision on what was real and what was part true, part fake, lies etc. In the end after all information was looked at the iG found only one thing and that was how the FBI acted to clear one person. The report said nothing was wrong with what was done it total. Final fact which no one can change no matter how hard they try.

Page 177 Thru 179 of the Horowitz IG Report revelation.

What did President Obama know and when did he know it.  It looks like he was running Spygate!!

Just a note to all this is the Trump far right trying to control what we talk about on a subject. They succeeded with the Muller report as Barr held up releasing it until he had his press conif., and then released the report about 2 weeks later which was viewed in a way Barr had set, and in a lot of the public minds the Muller report said nothing. That did not happen this time since we have known for about 2 weeks what was going to be in the report so the efforts by Barr to control how it is viewed is very limited.

The Dems should be setting  the talking point on Trump now for the election, and the people running for President are not doing that. That gives Trump a better chance of being reelected.

The significant failings are laid bare in a report made public Monday that showed the FBI withheld from the FISA court misgivings about its star informant Christopher Steele, as well as evidence of innocence against targets like former Trump campaign advisers Carter Page and George Papadopoulos.

Here is the list of the 17 flagged failures in the FBI’s handling of FISA warrants in 2016 and 2017, as described in Horowitz’s own words.

1. Omitted information the FBI had obtained from another U.S. government agency detailing its prior relationship with Page, including that Page had been approved as an “operational contact” for the other agency from 2008 to 2013, and that Page had provided information to the other agency concerning his prior contacts with certain Russian intelligence officers, one of which overlapped with facts asserted in the FISA application;

2. Included a source characterization statement asserting that Steele’s prior reporting had been “corroborated and used in criminal proceedings,” which overstated the significance of Steele’s past reporting and was not approved by Steele’s handling agent, as required by the Woods Procedures

3. Omitted information relevant to the reliability of Person 1, a key Steele sub-source (who was attributed with providing the information in Report 95 and some of the information in Reports 80 and 102 relied upon in the application), namely that (1) Steele himself told members of the Crossfire Hurricane team that Person 1 was a “boaster” and an “egoist” and “may engage in some embellishment” and (2) INFORMATION REDACTED

4. Asserted that the FBI had assessed that Steele did not directly provide to the press information in the September 23 Yahoo News article based on the premise that Steele had told the FBI that he only shared his election-related research with the FBI and Fusion GPS, his client; this premise was incorrect and contradicted by documentation in the Woods File- Steele had told the FBI that he also gave his information to the State Department;

5. Omitted Papadopoulos’s consensually monitored statements to an FBI CHS in September 2016 denying that anyone associated with the Trump campaign was collaborating with Russia or with outside groups like Wikileaks in the release of emails;

6. Omitted Page’s consensually monitored statements to an FBI CHS in August 2016 that Page had “literally never met” or “said one word to” Paul Manafort and that Manafort had not responded to any of Page’s emails; if true, those statements were in tension with claims in Report 95 that Page was participating in a conspiracy with Russia by acting as an intermediary for Manafort on behalf of the Trump campaign; and

7. Included Page’s consensually monitored statements to an FBI CHS in October 2016 that the FBI believed supported its theory that Page was an agent of Russia but omitted other statements Page made that were inconsistent with its theory, including denying having met with Sechin and Divyekin, or even knowing who Divyekin was; if true, those statements contradicted the claims in Report 94 that Page had met secretly with Sechin and Divyekin about future cooperation with Russia and shared derogatory information about candidate Clinton.

8. Omitted the fact that Steele’s Primary Sub-source, who the FBI found credible, had made statements in January 2017 raising significant questions about the reliability of allegations included in the FISA applications, including, for example, that he/she had no discussion with Person 1 concerning WikiLeaks and there was “nothing bad” about the communications between the Kremlin and the Trump team, and that he/she did not report to Steele in July 2016 that Page had met with Sechin;

10. Omitted information from persons who previously had professional contacts with Steele or had direct knowledge of his work-related performance, including statements that Steele had no history of reporting in bad faith but “[d]emonstrates lack of self-awareness, poor judgment,” “pursued people with political risk but no intelligence value,” “didn’t always exercise great judgment,” and it was “not clear what he would have done to validate” his reporting;

11. Omitted information obtained from Ohr about Steele and his election reporting, including that (1) Steele’s reporting was going to Clinton’s presidential campaign and others, (2) Simpson was paying Steele to discuss his reporting with the media, and (3) Steele was “desperate that Donald Trump not get elected and was passionate about him not being the U.S. President”;

12. Failed to update the description of Steele after information became known to the Crossfire Hurricane team, from Ohr and others, that provided greater clarity on the political origins and connections of Steele’s reporting, including that Simpson was hired by someone associated with the Democratic Party and/or the DNC;

13. Failed to correct the assertion in the first FISA application that the FBI did not believe that Steele directly provided information to the reporter who wrote the September 23 Yahoo News article, even though there was no information in the Woods File to support this claim and even after certain Crossfire Hurricane officials learned in 2017, before the third renewal application, of an admission that Steele made in a court filing about his interactions with the news media in the late summer and early fall of 2016;

14. Omitted the finding from a FBI source validation report that Steele was suitable for continued operation but that his past contributions to the FBI’s criminal program had been ” minimally corroborated,” and instead continued to assert in the source characterization statement that Steele’s prior reporting had been “corroborated and used in criminal proceedings”;

15. Omitted Papadopoulos’s statements to an FBI CHS in late October 2016 denying that the Trump campaign was involved in the circumstances of the DNC email hack;

16. Omitted Joseph Mifsud’s denials to the FBI that he supplied Papadopoulos with the information Papadopoulos shared with the FFG (suggesting that the campaign received an offer or suggestion of assistance from Russia); and

17. Omitted information indicating that Page played no role in the Republican platform change on Russia’s annexation of Ukraine as alleged in the Report 95, which was inconsistent with a factual assertion relied upon to support probable cause in all four FISA applications.

Well you are scrapping the bottom of the barrel when you use something by John Solomon. Did I not see a story in the news about him a week ago or so. It was about reporters who were so bad their employer was looking at firing them. Who does Jon work for now?

No matter how many times and how many different far right opinion writers you post it does not change anything. There are no damning Revelations in the IG report. The IG cleared what was done period, and if Barr can not change that these writers can not so what they publish is utter nonsense. Still waiting to hear if you support Trump the wife rapper.

jimc91:   As Mike Cernovich discovered in Chapter Five of the report, there’s extensive documentation of the FBI not following FISA procedures, and then lying to judges.

Mike Cernovich?  Still listening to that guy? Lol. I keep thinking that someday the right will get tired of watcing all their pet conspiracies go up in smoke, but they keep going like little energizer bunnies.

True. That Trump or Barr don't care for the report's conclusions should tell you what it found.......it found the opposite of all their favorite conspiracy theories of wrongdoing by investigators. They'll be sifting through it digging out every tiny crumb they like, but that stuff is insignificant in the bigger picture.