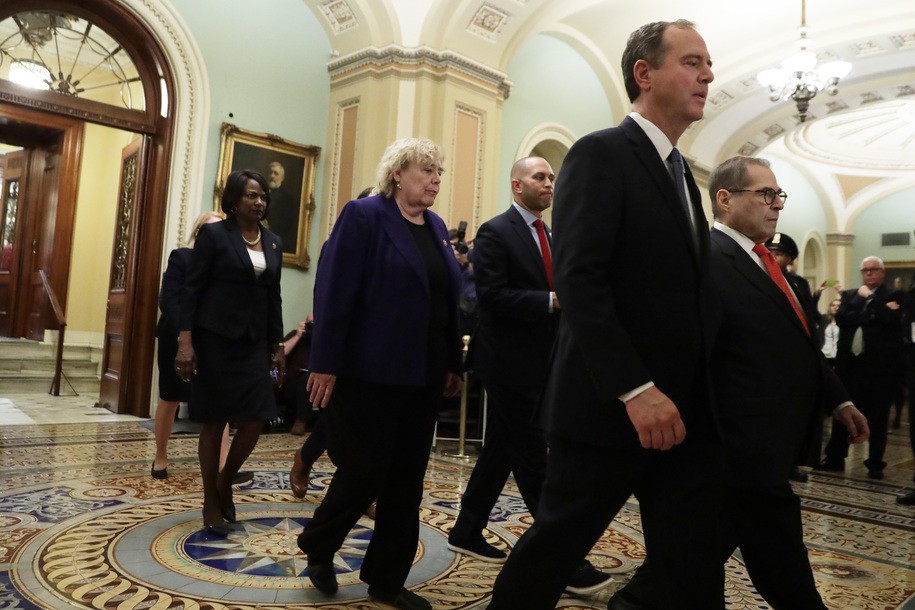 Rep. Adam Schiff, in his role as impeachment manager, both distilled the import of this trial and put Senate Majority Leader Mitch McConnell under a harsh light, without ever mentioning McConnell's name. In his opening argument, as prepared and provided by email, Schiff says that the "House did not take this extraordinary step lightly. As we will discuss, impeachment exists for cases in which the conduct of the President rises far beyond mere policy disputes to be decided, otherwise and without urgency, at the ballot box."

But, he says "we are here today to consider a much more grave matter, and that is an attempt to use the powers of the presidency to cheat in an election. For precisely this reason, the President’s misconduct cannot be decided at the ballot box—for we cannot be assured that the vote will be fairly won. [emphasis added]"

It's time to end McConnell's destructive stranglehold on the republic. Please give $1 to our nominee fund to help Democrats and...

That's the case in a nutshell, that and the continuation of the thought, that "in obstructing the investigation into his own wrongdoing, the President has shown that he believes that he is above the law and scornful of constraint." Trump believes he's above the law and unconstrained because McConnell refuses to do his constitutional duty and provide a check. No where is that failure of McConnell more dire than in refusing to secure the ballot box, which Schiff is subtly underscoring in his statement.

The legislation to protect our elections from interference from Russia and other adversaries has been sitting in the graveyard of the Senate for months, with McConnell refusing to act on it because he says the government has done enough, and even congratulates the Trump administration for the actions it's taken. That presumably includes Trump publicly, on national TV,  inviting any foreign government who wants to interfere to come on in.

This is deadly serious business. McConnell and Senate Republicans might not be taking that seriously, but the nation is watching.

0 Kudos
96 Views
0
Share
Report
Reply
Turn on suggestions
Auto-suggest helps you quickly narrow down your search results by suggesting possible matches as you type.
Showing results for
Show  only  | Search instead for
Did you mean:
Users
Announcements