Not a Conservative but just another crazy liberal.

ALEXANDRIA, Va.— The 66-year-old Illinois man who opened fire early Wednesday on members of Congress practicing for a charity baseball game, raged against President Trump and once singled out House Majority Whip Steve Scalise, who was wounded in the attack.

"Here's a Republican that should lose his job, but they gave him a raise,'' James T. Hodgkinson allegedly wrote in a 2015 post to his Facebook account, referring to the Louisiana congressman. The message was accompanied by a cartoon depiction of Scalise.

Did he apologize?  I don't recall.  What about the person putting this sign on their property? Or created this pic??? 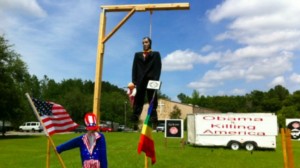 I never saw a single post from you or other Conservatives condeming this hateful rhetoric.  NOT ONCE, EZ.

So, you are just as responsible as any Dem you care to point your finger at.

For the record it was a Bernie Sanders supporter already pointed out by several other posters.....and a Trump hater.  There are many.  The 24/7 hate speech against Trump has to stop but doubt the lefties will let it go.  Nope, it doesn't "have to stop"  Many dispise the guy.  Too bad you helped get him elected.  Own your responsibility in what you helped create.

Another day in the U.S. and another day of gun violence.  I'm sure the GOP answer to this latest act of senseless gun violence is more guns.  Lucky Trump has requested more money for the military because it will be needed to protect the U.S. from itself.

You're right, Crepp.  It seems like Conservatives and the NRA have difficulty putting two and two together.

Another day in the U.S. and another day of gun violence.  I'm sure the GOP answer to this latest act of senseless gun violence is more guns.  Lucky Trump has requested more money for the military because it will be needed to protect the U.S. from itself.

455 Views
Message 39 of 95
@cent.......Since I have figured out that you will go up in smoke if you don't get the last word, say something on this post and you can have it. Would not want anything to happen to you.

The old saying goes something like this, "If accused, you may as well do it." Obama was the most ineffective President this country has ever had.

And yet his approval rating is twice that of your guy.  You elected a hateful man; he's getting some of that in return.  And I blame his uneducated and hate-filled supporters.

Education, Not Income, Predicted Who Would Vote For Trump

Most believe Obama was very effective given he had to deal with the greatest recession since the depression and two Conservative generated wars with an obstructionist Congress the last 6 years.  Your guy can't get anything done and he has both houses of Congress on "his side".  It's actually very funny to watch.


"FAKE 45 #illegitimate" read a sign at the Woman's March in DC, 1/27/2017
Report Inappropriate Content
1
Kudos
455
Views
Reply
1 Kudo
Turn on suggestions
Auto-suggest helps you quickly narrow down your search results by suggesting possible matches as you type.
Showing results for
Search instead for
Did you mean:
Users
Announcements