Red tide is back off the coast of Florida. REJOICE GOP!

The red tide at Venice Beach as of 11/12/2019 is not present.  The water is free of dead fish, and there is no smell of "death" in the Air, there is no scratchy  throat,  received pictures from a friend this 🌞morning and her golden retriever was swimming happily in the clear aqua marine  waters of Venice Beach!'

Thanks Kenneth for the eyewitness account....that's sure current!!!  I wonder why the difference in the 105 mile difference between Naples and Venice Beach....favorable winds?  The tide?  I've read the Red Tide can be quite localized given the existence of specific conditions....would you agree?

Thanks, and welcome to the forum.....

The red tide at Venice Beach as of 11/12/2019 is not present.  The water is free of dead fish, and there is no smell of "death" in the Air, there is no scratchy  throat,  received pictures from a friend this 🌞morning and her golden retriever was swimming happily in the clear aqua marine  waters of Venice Beach!'

Red tide is back off the coast of Florida. REJOICE GOP!

Red tide is back off the coast of Florida. Residents aren't sure how much more they can take

Starting in the summer of 2017, Colleen Gill's strolls on the beach were often interrupted by the smell of death.

For more than a year, she came across thousands of grisly scenes during her walks on beaches around Naples, Florida. She posted them to her Facebook page: dead fish, sea turtles and even dolphins strewn across some of Florida's most popular beaches, many victims of an exceptionally long outbreak of red tide.
After 16 months that cost the state economy millions of dollars and left beachgoers choking on fumes emitted by the toxic algae, the organisms finally loosened their deadly grip on the waters earlier this year.
And for awhile, Gill's walks on the beach returned to normal. As the waters cleared up, she was excited to finally see a pod of dolphins.
That was until about a month ago, when she smelled it again. 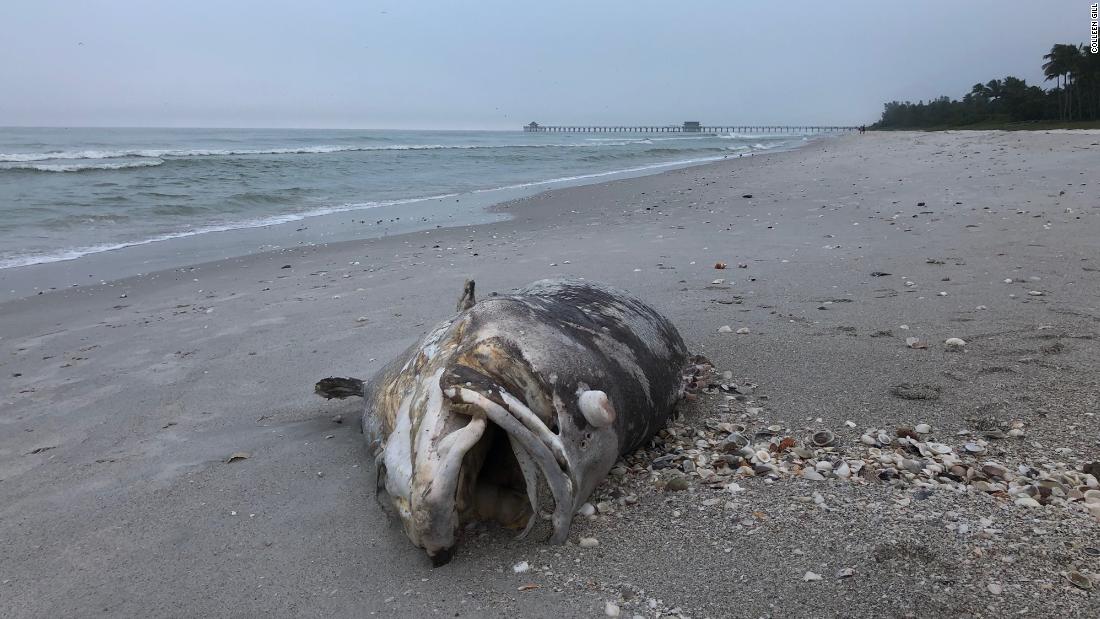 A black grouper that washed ashore in early November may have fallen victim to this latest red tide.
"I really thought we were going to get lucky, but then I walked out to the beach and smelled that all too familiar smell of dead fish and felt that scratch in my throat from the toxins in the air," said Gill, a Naples resident. "All I could think to myself was, 'Here we go again.'"
Now, the toxic algae has returned to the waters off southwest Florida and has begun to slowly creep up the state's Gulf coast over the past month.
Scientists say it is difficult to predict where the tide is heading next, or how long it will last.
But residents who experienced the last one are worried -- about their health, the wildlife and whether their businesses can endure another prolonged outbreak.
Bill D'Antuono has lived in Naples for nearly all of his 33 years, and leads fishing and diving expeditions off the Florida coast. So far, he said, this red tide does not appear to be as bad as last year's, and he can still find clear water to fish and dive in.
But in a line of work that is intimately tied to the health of the ecosystem, he is worried about how much more it can bear.
"We got hit really hard last year, and we just can't take any more," D'Antuono said. 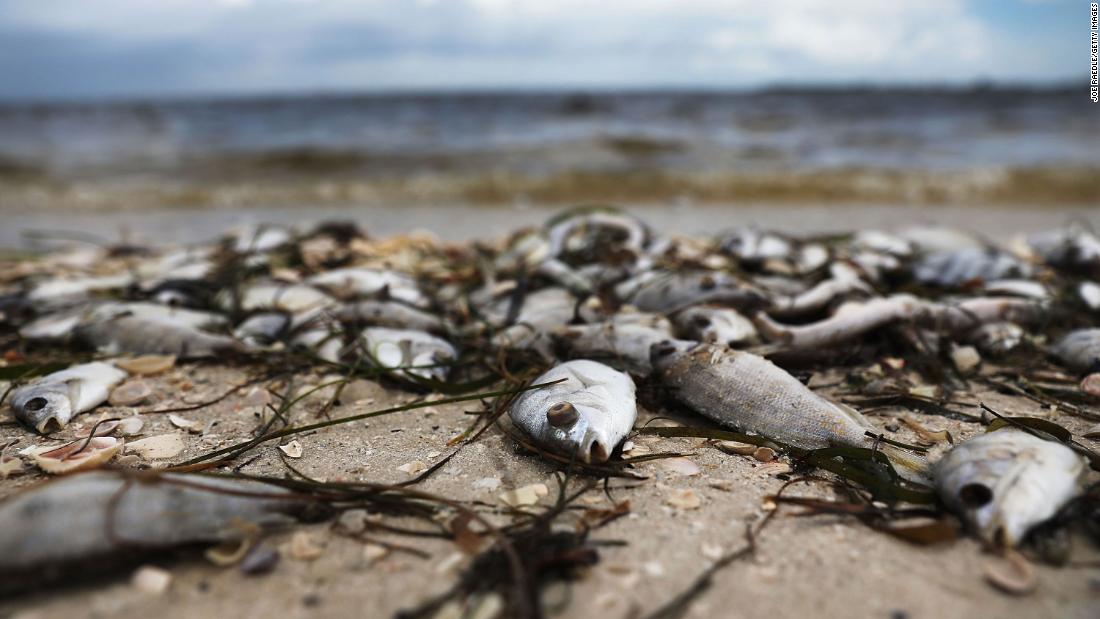 Fish are washed ashore near Sanibel during the historic red tide of 2017 and 2018.
Tim Thompson, another Naples resident who owns an interior design firm along with his wife, says much of his business is dependent on clients coming down to their vacation homes. Last year, he says, many weren't staying as long or were staying away completely because of the severity of the red tide.
In a place that bills itself as an idyllic getaway, the foul state of the water is threatening to spoil the natural beauty that makes Florida's southwest coast a vacation destination to begin with, Thompson worries.
It's the length of these red tides and their close succession that is so troubling, said the 32-year Naples resident.
"If you've been here 20 or 30 years, red tide was an event that was around for a weekend or a week," he said. "Now, we're looking at months."
Florida's red tide is caused by a species of algae called Karenia brevis, which release neurotoxins that can be deadly to wildlife and can even cause breathing problems in humans on land.
While red tide has occurred for centuries, the 2017-2018 event was the fifth-longest on record, and only the second since 2007 to hit Florida's east, southwest and northwest coasts at the same time.
In response to last year's historically bad tide, Florida's new Republican Gov. Ron DeSantis created a Red Tide Task Force that is studying the causes of these blooms.
Though not nearly as widespread as the last one, this latest outbreak is showing fairly high algae concentrations, according to Dr. Robert Weisberg, a professor of physical oceanography at the University of South Florida, who has studied these events for more than two decades. 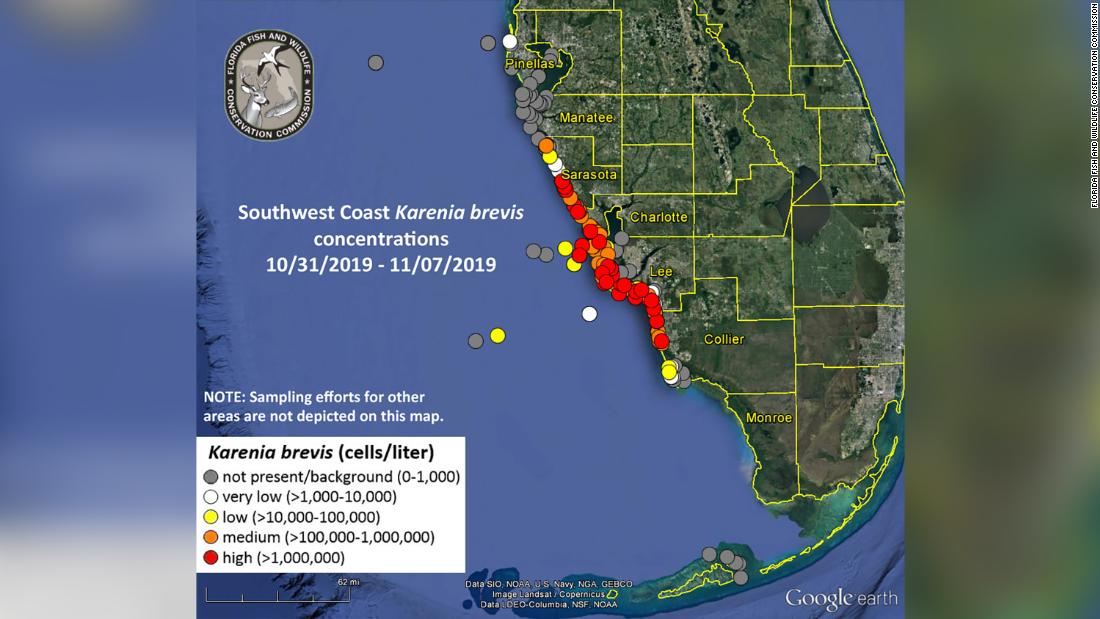 A map from the Florida Fish and Wildlife Conservation Commission published on November 8 shows the extent of the current red tide off Florida's southwest coast.
Right now, the algae is most prevalent in the waters off of Sarasota, Lee, Collier and Charlotte counties. But it has been gradually inching north toward the Tampa Bay region. Already, several fish kills and turtle deaths have been reported in areas where the algae concentrations are highest.
Amid the damage, there are questions about the role that climate change may be playing in these events.
Dr. James Douglass, an associate professor of marine science at Florida Gulf Coast University, says that any connections between red tide and climate change need more study.
But scientists are confident that climate change is spinning up hurricanes capable of dropping higher rainfall totals, and Douglass says researchers are exploring whether the nutrient-rich runoff from these wetter storms could be a factor.
Weisberg says exactly how this red tide began is a bit of a mystery to scientists.
The phenomenon usually originates offshore and then is carried into the shoreline, where warm, shallow waters and nutrient runoff from farms, lawn fertilizer and leaky septic systems, plus decomposing fish, provide the ideal environment for explosive algae growth.
But Weisberg says this red tide took hold close to the shore from the start.
"Like any complicated problem, you think you've begun to understand it, and then nature throws you a curve ball," the professor said.

Red tide is back off the coast of Florida. Residents aren't sure how much more they can take


"FAKE 45 #illegitimate" read a sign at the Woman's March in DC, 1/27/2017
Report Inappropriate Content
2
Kudos
204
Views
3
Replies
Reply
2 Kudos
Turn on suggestions
Auto-suggest helps you quickly narrow down your search results by suggesting possible matches as you type.
Showing results for
Search instead for
Did you mean:
Users
Top Authors
View all