In an AOC-Like Shocker, Missouri’s Cori Bush Takes Down a Democratic Heavyweight in a Primary Race

The increasingly powerful progressive wing of the Democratic Party notched another big Primary win on Tuesday when Cori Bush upset 10-term congressman William Lacy Clay in a race to represent Missouri’s First Congressional District in the House of Representatives.

Clay was part of a Missouri political dynasty; his father, William Clay, held the seat for three decades.

Clay’s defeat means that for the first time in 52 years, neither he nor his father will hold this congressional seat. 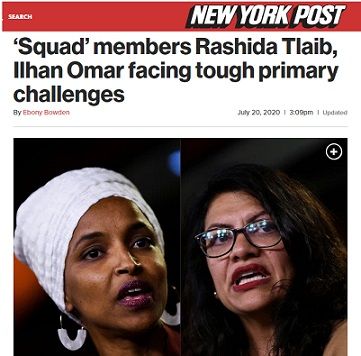 Rashida Tlaib had faced Brenda Jones in a Special Election in 2018 to fill Rep. John Conyer's seat after he resigned over sexual allegations. Jones had eked out a 2-point victory over Tlaib.
However, Tlaib won the subsequent election in the 2018 midterms, beating Jones by 1%, propelling her to a two-year term in Congress.

Rashida Tlaib, now running as an incumbent, defeated Jones in a rematch by a wide margin -- 66% to 34%.

Tlaib put out a statement claiming victory as her big lead became apparent: "Voters sent a clear message that they’re done waiting for transformative change, that they want an unapologetic fighter who will take on the status quo and win."

Ilhan Omar is facing a tough challenge in her Primary this week on August 11, 2020.
Her opponent Melton-Meaux had significantly outraised Omar's campaign in the second quarter of this year.

Do not get to carried away with what happened. The so called heavy weight was an absentee congressman from the Dist we are told. When that happens you loose and should.

I watched Cori Bush on TV yesterday. I thought she was very impressive and has a good handle on what is happening in the USA. She made it very clear there is only one goal in Nov. get Trump out, and she said she will do everything she can to see that happens. She understands the next 4 years will be spent cleaning up the Trump mess not pushing the far left agenda. She said there will be progress in all the areas she is advocating for and that would be a good start for her. I think she will do well for the people in her Dist.

There was a Dem. opinion writer on TV also. She was saying how great it was that Bush won and now the campaign can be about pushing the far left goals in the election. Well if she is right Trump wins as she was giving what a number of the far left think will happen. The country moves far left. It will not, and if a lot of Dems follow that path we have Dictator Trump and a good number of them will be on their way to jail.

The election must be about Trump and what he has done to destroy the country. 90% of the people should be able to rally around that and get Trump out. Cori Bush laid it out well and all should follow what  she said.

Sorry but don't like it.   that will give more credence to what Trump has been saying about the Democrats. that they are trying to institute Socialism in the US. not good.

Along with other progressive candidates, Cori Bush was featured in the Netflix documentary 'Knock Down the House'....

Tom5678
Honored Social Butterfly
They did well nationally! Gives me hope for Nov.!!!
0 Kudos
365 Views
0
Share
Report
Reply
Turn on suggestions
Auto-suggest helps you quickly narrow down your search results by suggesting possible matches as you type.
Showing results for
Show  only  | Search instead for
Did you mean:
Users
Announcements