I think it's going to be closer than many others. 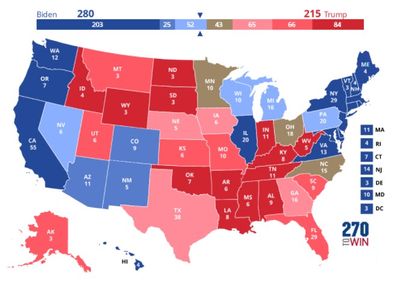 It's now three weeks later..anyone want to change their selections after 1 debate, a canceled debate and subsequent town hall and an ignorant performance by a VERY sick man in the first scheduled debate.

No matter how I look at that map Biden gets 300 electoral votes. I am only concerned with the Battle ground Stated.  so I will say Michigan, Penn Arizona, Wi Colorado, hoping New Mexico. and then they  can jump in the lake but, no matter how many voted Biden wins, Trump will not accept defeat. and will try to do whatever he can to stay It doesn't matter that he cannot prove that the elections are rigged. he will stay no matter what.  and this country will see violence by his members because they will not accept defeat either.
So it will get bloody.
In many ways I am glad that he is putting that woman in the Supreme Court, that will enrage many more people  many of them women that believe  being pro choice. other like the gay marriage situation that is also in peril, plus Obamacare,  now things are becoming real for many people and they  better do something about it or they will loose.

no name
1 Kudo
245 Views
0
Share
Report
Reply
Turn on suggestions
Auto-suggest helps you quickly narrow down your search results by suggesting possible matches as you type.
Showing results for
Show  only  | Search instead for
Did you mean:
Users
Announcements