The Iowa Caucuses Are Here.

For Bragging Rights to the AARP Boards name the top three finishers in order.

I don't like caucuses and never have, personal preference I guess. I think we should have straight primaries across the nation.

Considering the slight slip-up in Iowa I won't ask for guesses on N.H.

How do you explain what is going on in Iowa???

How do you explain what is going on in Iowa???

The pooch has been well and truly screwed.

Why the Iowa voting fiasco matters The Democratic Party looks incompetent, and public trust in election integrity has been further eroded.

The Monday night caucuses were the biggest moment in four years for Iowa Democratic Party. They screwed it up beyond belief. They had one task: to produce timely, accurate, and reliable vote totals, and they failed completely. TV anchors sat around filling time, waiting for Godot to show up with election returns. None appeared. The candidates themselves began flying off to New Hampshire for next week’s primary.

It was a fiasco, a huge embarrassment not only for state officials but for the national party. It denied the winners their big moment before the TV cameras on election night—and the fundraising bonus that goes with it. It left the losers wondering if they’ve been robbed. It left Iowans questioning whether they will ever hold caucuses again or keep their prime spot as first-in-the-nation. The bitterness over this mess will linger, and the Republicans will exploit it.

To begin with, this failure makes the Democratic Party look ridiculous. The damage is compounded because they are the “party of government.” That’s their brand, and it been since Franklin Roosevelt proposed the New Deal. Democratic policies almost always call for more government, run from Washington. When people point to social or economic problems, Democrats reflexively respond with laws, regulations, and bureaucracies to tackle them (and taxes to pay for them). That prospect looks a lot less appealing when you can’t count the votes in a high school gym. It doesn’t encourage people to say, “These are just the people to handle my healthcare.”

Second, Bernie’s voters came into the caucuses (a) thinking they would win, and (b) not trusting the party apparatchiks to give them a fair shake. This mess deepens those fears. If they don’t come away victorious, many Sanders supporters will think they were cheated. That’s a problem for Democrats, who need a united party to win in November. The fiasco in Iowa only deepens the mistrust between Bernie’s supporters and the party’s traditional center-left. It was already deep, and “mistrust” may be too mild a word.

Third, the confusion over vote-counting in Iowa underscores a larger, more ominous problem: Americans’ declining confidence in the integrity of their elections and the legitimacy of the winners. For democracy to flourish, voters must believe elections are fair and the winners honestly chosen. The public’s growing skepticism is fed by party leaders who refuse to accept defeat graciously. That’s more than simple courtesy. It is the foundation for the peaceful transfer of power between opposing parties, democracy’s great achievement. That transfer requires that the losers publicly acknowledge the winners’ legitimacy.

In recent years, losers have grown more reluctant to do that. At a 2016 Republican presidential debate, a moderator asked the candidates if they would accept the results if they lost. It was troubling enough that the question needed to be asked. It was more troubling that Donald Trump didn’t immediately say “yes.” (He did later.) Unfortunately, nobody asked the Democratic candidates. They should have.

The Democrats’ refusal to accept the 2016 results has been the leitmotif of the entire Trump presidency. Hillary Clinton has never accepted her loss. She has never given a full-throated acknowledgment that Trump was honestly elected. Her party seems to agree. It was why they pressed for the Mueller investigation. Dissatisfied with those findings, Adam Schiff is now making the same argument about the coming election. Unless we remove Trump immediately, he told the Senate trial, he might steal the 2020 election. That’s nothing more than a dangerous slur unless he provides supporting evidence. He hasn’t. But it’s the thought that counts, and it’s a malicious thought. Still, it does highlight the crucial importance of fair elections and reliable results. What happened in Iowa doesn’t help.

Monday night’s Iowa Caucuses were a mess, a debacle, a failure, a fiasco . . . a Dead Parrot. They made the Democratic Party look incompetent, stole the spotlight from the winners, deepened the rift between Bernie Sanders and party regulars, and further eroded public trust in election integrity. It’s hard to image a worse way to begin the primary season.

I think it was a rush to go high tech. Mix in some cronyism.

Iowa never had these problems in previous elections.

Shadow, a tech firm that describes itself as a group that creates "a permanent advantage for progressive campaigns and causes through technology," is the company that created the Iowa Democratic Party's app, according to The New York Times.

At least the COO, CEO, CTO and a senior product manager at Shadow all worked for the Hillary Clinton presidential campaign, according to LinkedIn profiles.

There was no evidence that the state Democratic Party, which is overseeing the election, was "rigging" the results, although the confusion that followed Monday's caucusing was met with a steady flow of conspiracy theories online as to what exactly was going on.

Eric Trump: "Mark my words, they are rigging this thing ... what a mess. This is why people don’t want the #Dems running our county."

Donald Trump Jr: "The fix is in... AGAIN, and we get to watch it play out on live TV. Incredible."

President Trump used the caucus confusion as an opportunity to bash Democrats, claiming that he is the only candidate who left Iowa with a win. 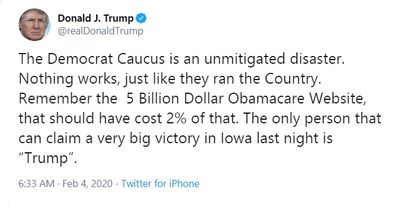 I think it was a rush to go high tech. Mix in some cronyism.

Iowa never had these problems in previous elections.

You're right, Gordy....not THESE problems....but many forget it took Iowa TWO WEEKS to correct an issue in the 2012 GOP Primary when they had Mitt Romney beating Rick Santorum when actually Santorum won...

This did not work out the way I planned.

Allegations of impending voter fraud in Iowa, pushed by conservative activists with debunked evidence, are being shared widely on Twitter ahead of the Iowa caucuses.

The viral claims originated on Sunday with a tweet by Tom Fitton, president of the conservative legal group Judicial Watch.

On Twitter, Iowa’s Secretary of State Paul Pate called the claim “false” and posted a link to the county-by-county voter registration totals.

“They are updated monthly and available online for everyone to see,” he wrote.

Allegations of impending voter fraud in Iowa, pushed by conservative activists with debunked evidence, are being shared widely on Twitter ahead of the Iowa caucuses.

The viral claims originated on Sunday with a tweet by Tom Fitton, president of the conservative legal group Judicial Watch.

On Twitter, Iowa’s Secretary of State Paul Pate called the claim “false” and posted a link to the county-by-county voter registration totals.

“They are updated monthly and available online for everyone to see,” he wrote.

Mr. I-like-to-show-off-my-muscles?  Too bad the knucklebrain has nothing between his ears.

What is really bothersome is that whatever trump minions post are lies and not anywhere close to the truth...

just whatever they can make up to support trump...yet trump supporters do not think that credibilty is a good trait...

Not sure about who will take Iowa. Might be pretty close. I'm pulling for Biden, currently, but could be 2 or 3 others who might take it. Polls seem to vary. My hope is for unity for all of the candidates,

not to declare war on one another!

The Iowa Caucases Are Here.

For Bragging Rights to the AARP Boards name the top three finishers in order.

2 Kudos
353 Views
0
Share
Report
Reply
Turn on suggestions
Auto-suggest helps you quickly narrow down your search results by suggesting possible matches as you type.
Showing results for
Show  only  | Search instead for
Did you mean:
Users
Announcements