No One Is Talking About Trump Taking Over 4th

This is such a disgusting theft of tradition by an arrogant, selfish, self centered, demented person who play acts at being president, who continually sinks the office he holds to all time new lows. My hope is that most Americans will recognize and reject the act of self

I’ve heard that there will be some special invitations given out: kkk, nazis, white supremists and all of his “fine” friends? And at this point with trump, would it surprise us if he has all of his dictator friends on stage with him!

May we all remember the real reasons for Celebrating the 4th...and it is not to worship trump.

The Trump Federal Government won’t allow the legendary balloon to be filled with helium and banned it from the Lincoln Memorial, where Trump will speak.

The Republican National Committee has been offering major donors tickets to Trump’s speech, as have political appointees at the White House and executive branch agencies.

This is a major money opportunity for dt organization(s).  What better day to sell, **bleep** out America than the 4th.  Yes he obsesses over 'first'.  God help us this will be the last, truly never again.

What had been a nonpolitical, nonpartisan celebration on the National Mall will now likely be a multimillion-dollar, taxpayer-financed political rally, critics worry.

WASHINGTON ― President Donald Trump has hijacked what for decades had been a nonpolitical Independence Day celebration on the National Mall, packing his ticketed-event speech with political appointees and Republican donors.

The Republican National Committee has been offering major donors tickets to Trump’s speech, as have political appointees at the White House and executive branch agencies.

I saw a picture yesterday that shows bleachers and bike rack (barrier) set up in front of the Lincoln Memorial and I thought that says it all.  Shutting down an iconic American monument of this country on its birthday and making it only accessible to the elite and chosen few.  (I'm sure other nearby monument closures will most assuredly occur during the celebration due to security concerns, etc.)

The logistics of staging Abrams tanks weighing 60 tons around the Memorial is also being examined due to concerns of damage to the underground rooms.

Yesterday evening, the Washington Post issued its own statement:

In recent weeks, readers have written letters to The Post recounting their memories of gathering on the Mall and watching the fireworks on the Fourth of July. Claire O’Dwyer Randall remembered her father driving her family in a 1939 DeSoto sedan “as close as we can get” to the Mall. Mary Resnick wrote about “our” special spot on the steps of the reflecting pool, surrounded by tens of thousands of “our best friends.” Carol Cavanaugh explained how the celebration was her annual reminder of the United States as glorious melting pot.

The letters were written in response to President Trump taking direct control of plans for the country’s premier Independence Day festivities; the writers were worried that a day traditionally set aside for Americans to come together for simple love of country was in danger of being co-opted and usurped. Judging by the latest revelations of the president’s plans, they were right to worry. The order of the day as ordained by Mr. Trump will not be patriotism but instead personality and politics.

It was bad enough that Mr. Trump sought to make the holiday about himself with plans to deliver a nationally televised address from the Lincoln Memorial, thus eliminating what many consider the hands-down best spot in Washington for fellowship and fireworks on the Fourth of July. But Mr. Trump now plans to cordon off an area in front of the memorial reserved just for dignitaries, family and friends. Nothing about reserved seating says “We the people.”

Equally, if not more troubling, is his insistence on a display of military might that will include a flyover of warplanes and the stationing of tanks or other armored military vehicles on the streets of the capital. What this will cost the Defense Department and the National Parks Service is anyone’s guess. (Officials have refused comment.) But the question of expense pales in comparison with the message that will be sent by a gaudy display of military hardware that is more in keeping with a banana republic than the world’s oldest democracy.

Administration officials say the celebration will be bigger and better than before, with more music and a longer fireworks display. But Americans shouldn’t be lured by the trappings or the spectacle or the rhetoric of Mr. Trump. Instead, like our letter writers, they should claim the day for values embraced by the founders: freedom, tolerance and respect for all. This picture captures the essence of Trump--idiot child all rolled into one!

That's a whole lotta love, for himself.  That photo, a contender for Trump 4th of July souvenirs.  ewww don't touch me!

Trump's existence as a US president on July 4 does not automatically make, What Came Before Him, a pile of dung.  He kicks the entire country in the head again. Good to know a senior sing-along could very well be more entertaining than tuning into his show.  (there are tickets)  The last family fun excursion left Barron at home.  That shouldn't happen again. 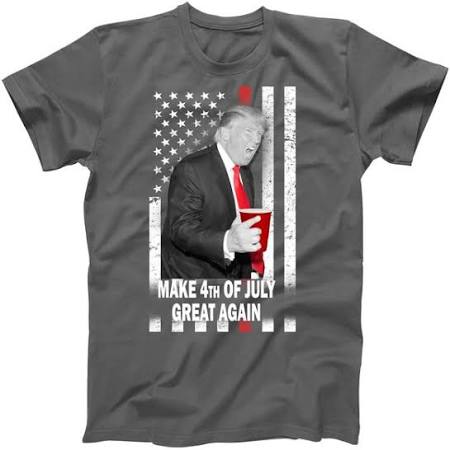 The feminist activist group Code Pink successfully applied for a permit to fly the 20-foot "Trump Baby" balloon earlier this month, and plans to put it near the Lincoln Memorial.

"Trump's America has been one of putting children in cages, dangerous instigation towards war with Iran, banning refugees and immigrants, aligning with the murderous Saudi regime, supporting Israel's occupation of Palestinian land, and spreading hate and racism," Code Pink said in a statement to ABC News.

"On the 4th of July, Trump plans to bring those sentiments to what has traditionally been a nonpartisan holiday in D.C." Another Episode of the APPRENTICE This picture captures the essence of Trump--idiot child all rolled into one!

No one with good sense expects trump to act any differently. Of course he will make it all about himself, his narcissism permeates his thinking.

At least I got to sign petitions stopping him from including tanks in a military style parade.

If someone flew the fat trump baby diaper balloon, would trump have it shot down?

The only thing I’m worried about is whether my husband will be working that day or not. He works in DC. I hope he can take the day off. Don’t need him down there with a bunch of crazy.

Straight up, dt is a malicious moron with the unfortunate need to find trouble for himself.  How dare anyone take this opportunity for magnifisence away from him.  He owns it and the questioned plans/procedures about 'it' now, will become self evident.  Doesn't look good to me and Manic I too hope your husband will avoid all contact.  Not even a traffic problem due to much the much longed for National Parade.  This 2019 4th celebration is officially just gross, it's stained and tainted on purpose.  Grab your loved ones and hold on to each other.

This time next year the Dems will be prepared for their mid July Democratic Convention in Milwaukee Minnesota.

(If anyone dies on the mall this year, dt may hold off from claiming our celebrations as his own next year.)

The Republicans will gather in Charlotte NC the end of August for their convention.  wow

Report Inappropriate Content
2
Kudos
386
Views
Reply
2 Kudos
Turn on suggestions
Auto-suggest helps you quickly narrow down your search results by suggesting possible matches as you type.
Showing results for
Search instead for
Did you mean:
Users
Announcements