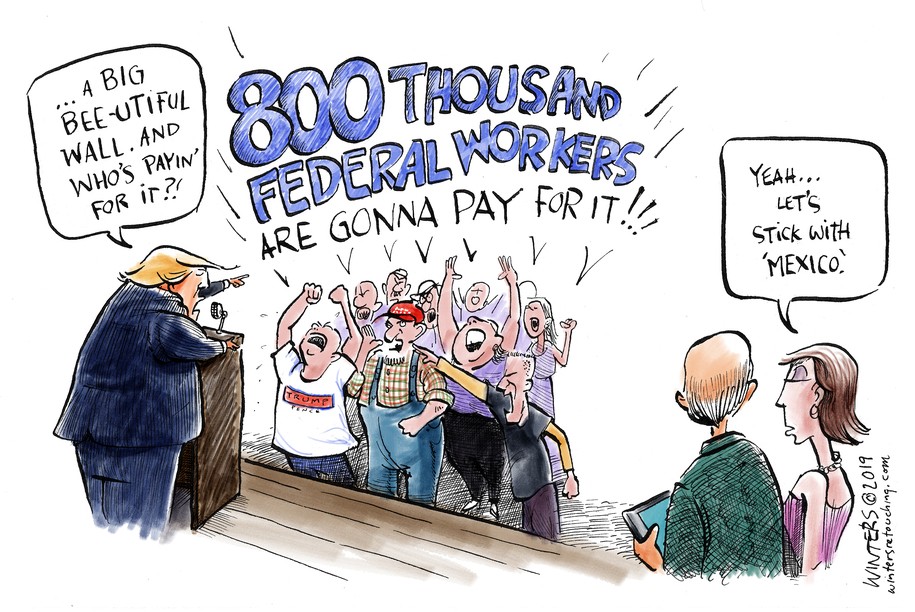 I guess this is what Trump supporters are agreeing to.  But it's not right and it's not fair!  And I can guarantee you, those 800 thousand workers who are working without pay don't agree with it either!

First of all, we all know Trump is an absolute liar who lies absolutely!  So for him to say that the federal workers "support his tactic of shutting down the government to enforce his demand for a border wall,"  we know that THAT statement in and of itself is a lie.  Any of us, using common sense, would prefer a paycheck today as oppose to a "wall" that, even if funded, wouldn't be built for a year or more and probably not be as effective as touted anyway.

President Trump has claimed repeatedly that most federal workers support his tactic of shutting down the government to enforce his demand for a border wall — including those directly affected by it. But a new poll of government employees shows that few actually do.

According to the survey conducted by the Government Business Council and GovExec.com and released Tuesday, 71 percent of federal workers oppose the shutdown, compared to just 21 percent who support it. Just 34 percent of federal employees surveyed support Trump’s demand for funding for the wall, while 56 percent oppose it. And of those workers against the wall, more than 80 percent say they are strongly opposed to it.

Meanwhile, a pair of recent national polls show most Americans blame the president for the shutdown. According to a CNN survey released Monday, 56 percent of Americans oppose a border wall, while 39 percent favor one. And according to a PBS NewsHour/Marist poll released Wednesday, 54 percent say Trump is to blame for the impasse, while 31 percent put the blame on Democrats in Congress. (Five percent of those polled blame congressional Republicans.) And more than 70 percent believe shutting down the government in order to reach an agreement on policy is a bad strategy, compared to just 22 percent who do.


"FAKE 45 #illegitimate" read a sign at the Woman's March in DC, 1/27/2017
Report Inappropriate Content
4
Kudos
153
Views
2
Replies
Reply
4 Kudos
Turn on suggestions
Auto-suggest helps you quickly narrow down your search results by suggesting possible matches as you type.
Showing results for
Search instead for
Did you mean:
Users
Announcements