Oh, poor Little Lord Fauntleroy Trump. Like he's never heard a word of profanity! Yeah, maybe the "word" Mrs. Talib chose to describe the president was pretty harsh, but I'm sure it's not one Trump is wholely (sic)unfamiliar with. Heck, it may be one he's used in the past because as we know, Mister Man has a perchant (sic) for profanity himself.

Making excuses for what Rashida Tlaib said does not change it.

So then ......... making excuses for trump using the MF word "does not change it" either, right?    https://www.youtube.com/embed/wN7KHWdyrbI

Do you admonish trump for the same thing? 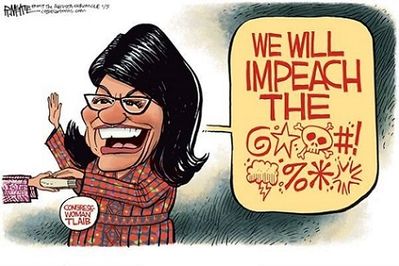 Yep - the truthful and accurate terminology that was used to describe the cowardly lying treasonous toad that Putin told what to say so that gullible right wingers would vote for him....

I see you still have a problem with understanding..

That would make a good thread but FYI this thread is about New Democratic congresswoman Rashida Tlaib and what the nasty women said .

Like it or not ...... trump has used the same word in public that she used, plus the "F" word at least a dozen times, the word "hell" more than a dozen times, "grab em by the **bleep**" multiple times, the "S" word (meaning excrement) many times, and even more unacceptable language by a president. Your excuse that this topic is about Rashida doesn't take away from the fact that trump has used far more disgusting and unacceptable language than Rashida has without a peep out of you. Why is that KidBoy?

Rightwingers have no need to get upset about what trump was called - that's simply locker room talk from females who can easily take down right wing white men who think they have the right to "get mouthy"...

That would make a good thread but FYI this thread is about New Democratic congresswoman Rashida Tlaib and what the nasty women said .

It's actually about how hypocrites can't stop revealing their actual selves.....

People that defend her actions show they are like her....despicable humans and should be treated as such.

Much as I wish it were not true, the explicative deleted is in common usage by everyone over the age of 12.

So why are GOPers so riled about this when their lil donny repeatedly makes sexually charged comments about his own daughter?

Making excuses for what Rashida Tlaib said does not change it.

And REPEATEDLY making excuses for INDIVIDUAL-1 doesn't change it either.

Oh, how many times have I seen his minions come on TV to EXPLAIN what he really meant because his spewing of MALE BOVINE EXCREMENT, including language every bit as "randy" as Tlaib's, got in the way of what he was "MEANING".

You do know that she has an extreme hatred for all Jews, don't you?

And you can prove that how?

Hey M P ............... KidBoy and some of the right wing posters here must have missed trump's statements shown in this video. It's either that or it's acceptable for trump but unacceptable for others. Double standards.

Michigan Rep. Rashida Tlaib was unapologetic about her choice of words calling for the impeachment of President Donald Trump. 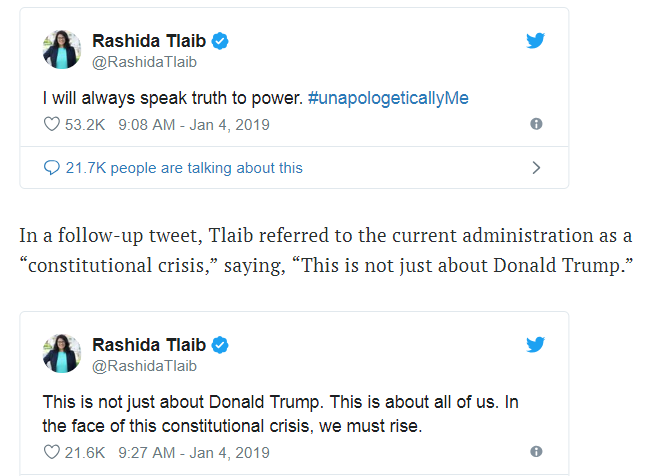 I'm thinking she could lose some votes in her next election because of this. At the same time, she's empowering the anti-Trumpers. I heard quite a few cheers when she said that.

If Trump is worried about a possible impeachment, this certainly won't put him at ease.

Here she is being arrested at a "Fight for $15" march.

@Soosie wrote:
That's pretty trashy. Next we'll be hearing she wishes her child were older so she could date him/her. Smiley Happy

She was talking to her child and used the F word. How much trashier can one get. If I am being trashy by your standards, then I will be for I am head and shoulders over this. Apparently some have lost touch with all decency.

"She was talking to her child"? Really?  I didn't see her child present, did you?

I think her language was unacceptable. Why have you never admitted that Trump has been guilty of language and statements that are also unacceptable?


Man learns from history that man learns nothing from history.
Report Inappropriate Content
2
Kudos
222
Views
Reply
2 Kudos
Turn on suggestions
Auto-suggest helps you quickly narrow down your search results by suggesting possible matches as you type.
Showing results for
Show  only  | Search instead for
Did you mean:
Users
Announcements