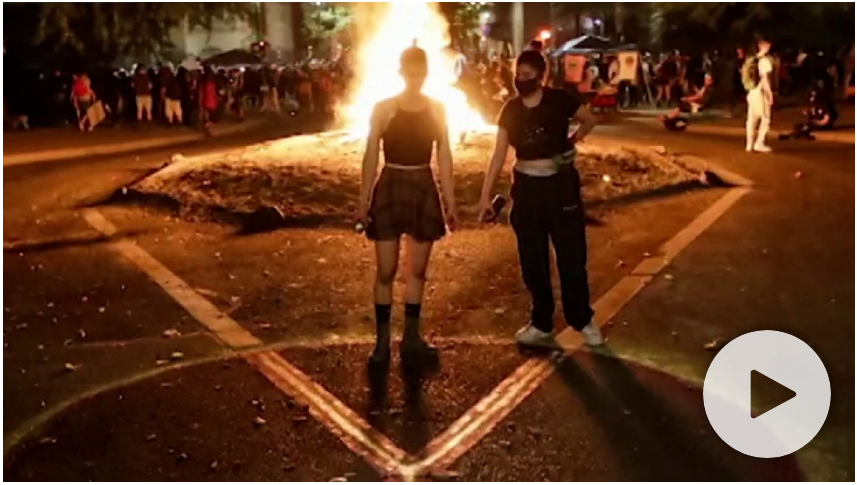 An anti-Trump group called for nationwide protests on Saturday -- seeking to fuel the left-wing protests that have roiled the country throughout the summer.

The left-wing group “Refuse Fascism” was organizing nationwide events, in places like New York City, Cleveland, Philadelphia and the Hatfield Courthouse in Portland -- where protests and riots have hit the federal property for more than 100 days.

Some wore Trump masks and some held signs that read, "Flush the turd." Other signs read "Trump/Pence out now," while some speakers said they won't wait until November to remove the Trump administration from power.

“We must make a living declaration to the world that we are uniting, we are organizing, we are determined, we are preparing to struggle with all we’ve got, starting now and not stopping until the Trump/Pence regime is driven from power and its fascist program brought to a halt," Andy Zee, Refuse Fascism spokesperson, told WBBM 780 Radio.

"Since impeachment, Trump has more and more declared himself to be above the law and to be the law," said Coco Das, who identified herself as spokeswoman for the group. "What they're aiming for is a white-supremacist, Christian-supremacist, male-supremacist fascist America."

"On September 5th, we must make a LIVING DECLARATION to the world that we are uniting, we are organizing, we are determined, we are preparing to struggle with all we’ve got, starting now and not stopping until the Trump/Pence regime is driven from power and its fascist program brought to a halt,” the group said in a statement.

Elsewhere, protests were planned for Detroit, Houston, San Francisco and Chicago. According to Reuters, the group has protests planned in 23 cities all together.

It’s part of a number of protests from a multitude of groups across the summer that have primarily focused on systemic racism and alleged police brutality against Black men -- including George Floyd and Jacob Blake. While a number of protests have been peaceful, a significant number have devolved into rioting and looting.

Cities including Chicago, Portland and Kenosha, Wis., have all seen devastating riots that have trashed property and businesses and seen police officers attacked and injured.

On Friday, there were violent protests in Rochester, N.Y., in reaction to recently released police body-camera footage of the March arrest of Daniel Prude, a Black man who died of asphyxiation a week later.

More than 300 miles away, protesters in New York City also turned violent, resulting in an unspecified number of arrests, .

Such violence has become a key election issue, with both President Trump and Democratic nominee Joe Biden accusing each other of not doing enough to combat the violence.

BLM is too lazy to protest in the rain.  It's raining in Chicago now.

Sounds like great reasons to protest. Of course in Trump World they have no respect for the law, the truth, the Constitution, and human life. Therefore, they don't understand why such a large segment of America is unhappy.

0 Kudos
151 Views
0
Share
Report
Reply
Turn on suggestions
Auto-suggest helps you quickly narrow down your search results by suggesting possible matches as you type.
Showing results for
Show  only  | Search instead for
Did you mean:
Users
Announcements