The ground work began with Trump's  " the Media is the people's enemy " rhetoric and the sheep followed in line like Sgt Schultz in Hogan's Heroes !!!

I won't argue either of your closing points - sad, very sad.

No Trumps not particularly bright.

And I miss the last guy, dear god do I miss him!

A brain and class vs DT and company.

A man who could speak and be understood, polished vs classless, uncouth and ignorant.

And yes, after long days/nights, I'd still like to swing these hunks of glass , plastic and silicon against the nearest wall Come on retirement!
Report Inappropriate Content
1
Kudos
7167
Views
Reply
1 Kudo
Highlighted

Frozoem--There are many  similarities between criminals trump and Nixon.

2. Attempts to suppress the legitimate press

4. Refusal to accept any blame for crimes committed

5. Special counsel--he fired those closing in too

Seems like one other guy said no crimes were ever committed by him, and complained about leaks.

You might recall the name Nixon but seems the money Trail and guilt also leads to the VP.(this time) 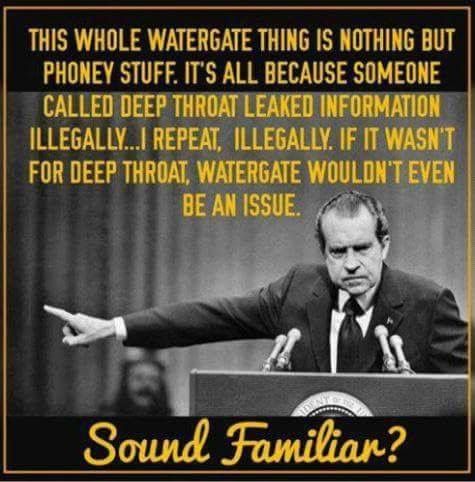 And yes, after long days/nights, I'd still like to swing these hunks of glass , plastic and silicon against the nearest wall Come on retirement!
Report Inappropriate Content
4
Kudos
7180
Views
Reply
4 Kudos
Highlighted

ChasKy--Could it be Hillary is going to visit little donnie in prison? Wonder if she will visit others in his corrupt family and organization while she's there! Hysterically funny!

Hillary Clinton will see the inside of a jail long before Trump does.

And when it ends up you are wrong you will publicly admit it, correct?

Snoopy!! Don't forget all his golf vacations he's wasted our money on!!

Still can't see why Dems should have to pay for a clearly corrupt fool.

Hey! Maybe the gullibles who voted for this idiot should each be sent a bill!!

Kiss the UN fainess docrine goodbye forever.  Thank God it's done with.  No one wants to see Chuck Schummer or Nancy Pelosi rebutting every comment that a Conservative says.

Thanks NOT - you have explained why the Fairness Doctrine needs to return. With it, FAUX, Breightfart, InfoWhores, et al, and or course Rush, will all have to allow equal time for rebuttals any time they slander a Democrat or just plain lie.

"Little donnie" as the radical left prefers to refer to our President has nothing to worry about with respect to "crimes" since he has NOT committed any.  Just because you say so and your liberal rags say so doesn't mean a thing!

Hillary Clinton will see the inside of a jail long before Trump does.

No one questions that our politicians are corrupt. I think  we on the Right should start demanding public financed political campaigns. I for one am sick of the it.

Wouldn't have to demand public financing of political campaigns, just agree to go along with what the left and center have hoped for for years.

Report Inappropriate Content
1
Kudos
7236
Views
Reply
1 Kudo
Turn on suggestions
Auto-suggest helps you quickly narrow down your search results by suggesting possible matches as you type.
Showing results for
Show  only  | Search instead for
Did you mean:
Users
Announcements