Mixed messages. Isn’t that just like the trump clan. Melania and Ivanka are just afraid of being thrown off the gravy train or written out of the will by the chauvinist and bully trump.

How much simpler would it have been for the jacket to have said “I care” or “I’m here because I care about the kids”. And where has Ivanka been on this...but once again it’s about the trumps and no one else.

I think some Deep State mole snuck into Melania's closet and wrote that just before she put it on.

Yep, it must be a Deep State conspiracy !!! 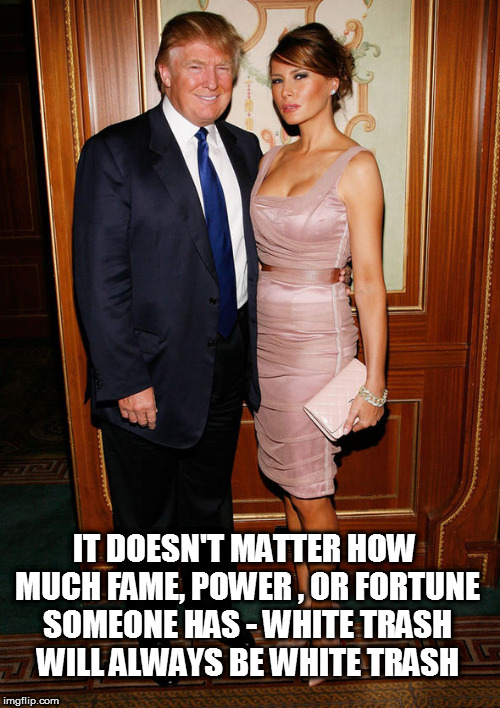 Ain't that the truth, these two prove that, and trash should be thrown out..

Any answer one way or another would have to come from Melania herself in a public statement video recorded by multiple media sources...

Even then - whether Melania was freely and truthfully speaking from the heart - or from fear of what could happen to her - could not be definitively determined.

trumps droogs - just like liddle donnie - are liars whose statements and allegations cannot be trusted to be even remotely related to the real world of proved established facts.

351 Views
Message 5 of 26
Good grief! And to think they lost their minds about Michelle in a sleeveless dress and President Obama in a tan suit. LOL.LOL.LOL
Report Inappropriate Content
4
Kudos
351
Views
Reply
4 Kudos
Highlighted

Since it's been established that trump's tweets are lies more than twice as often as they are the truth - who - but a credulous and somewhat obtuse ninny who fatuously believes what Putin's butt-boi tweets - would believe that tweet?

Nope.  Anyone who can read.

And here is Trump's explanation...

"But President Donald Trump offered his own interpretation in a tweet, saying it "refers to the Fake News Media. Melania has learned how dishonest they are, and she truly no longer cares!"

Might apply that to the Liberal posters here and their fake spin on things.....'who cares"

LOL!  Yep, she just figured that out today though her hubby has been saying it for the last 2 years....LOL!  As if trump has any credibility....

When I read that story I didn't know what to make of it. She can't be that crass sending a message about the detention kids. No. I can't buy that.  I understand most would prefer not to believe it....

I think what's bothering Melania the most is Stormy Daniels and all the other stories about her marriage to Trump. ("I Don't Care")  Well you might agree she chose an inopportune time to express t5hat view without saying anything....

What I'm wondering - did Trump or his team know she was going to wear that jacket? Did anyone warn her not to wear it?  I dunno...but it has been said fashion models always know what they're wearing and why.

Since it's been established that trump's tweets are lies more than twice as often as they are the truth - who - but a credulous and somewhat obtuse ninny who fatuously believes what Putin's butt-boi tweets - would believe that tweet?

Words on Melania Trump’s jacket cause controversy before border visit

@Centristsin2010, I know you and I hardly ever argue but I think you missed the boat on this one. It is very clear what message Melania is sending with this jacket.

(1) She was leaving the Executive Mansion. Who could see the message as she exited? Why ole "SPANKY" himself, that's who.

(2) Who sleeps in a bedroom separate from his wife? Why ole "SPANKY" himself, that's who.

(3) Who probably hasn't had sex with his wife in months or maybe longer? Why ole "SPANKY" himself, that's who.

(4) Who visited his wife in the hospital only once a day after major surgery? Why ole "SPANKY" himself, that's who.

(5) Who gets his hand swiped away when he tries to hold his wife's hand? Why ole "SPANKY" himself, that's who.

(6) Who spelled his own wife's name wrong? Why ole "SPANKY" himself, that's who.

So, @Centristsin2010, I think that Melania's message on the back of her cheap jacket pertains to her thoughts on her marriage to ole "SPANKY" himself.

"I REALLY DON'T CARE, DO U sums up this loveless marriage.

She's just hemmed in by an iron-clad pre-nup.

Even though I'm not Cent - that's entirely plausible and probable...

44>dolt45
Report Inappropriate Content
3
Kudos
402
Views
Reply
3 Kudos
Turn on suggestions
Auto-suggest helps you quickly narrow down your search results by suggesting possible matches as you type.
Showing results for
Search instead for
Did you mean:
Users
Announcements