Join AARP The Magazine TONIGHT for an online Q&A about Queen Elizabeth II's secrets to longevity. Find out more.

Make No Mistake - This is peLOSER/socialist shutdown

Did the President really "contrive" the caravans?

There is nothing lacking in reality in wanting immigration laws obeyed and/or enforced.

The President and Fox "contrived" the stupid notion the caravans were new (they happen every year) and posed some existential threat to American Freedom. Just another sad chapter in the saga of Republican racism run amok.

What is lacking is the understanding that those people are fleeing for their lives, not trying to sneak in so they can take American's jobs. If anyone lost a job to an undocumented worker it is because THE BOSS FIRED THEM AND HIRED THE IMMIGRANT. If you really want to stop that happening, ARREST THE BOSS AND FINE HIS PANTS OFF.

That will never happen because the "boss" is, or works for, a GOPerLord who has used cheap immigrant labor to keep American wages as low as possible for CENTURIES. They did it with the Germans, then the Irish, then the Italians and now the poor brown people coming north.

Are all those exploiters GOPerLOrds. Seems there must be some Dems in business.

The 9/11 terrorists came by air, the shoe bomber came by air, it was an airplane terrorists blew up over Lockerbee, and HALF of the undocumented here now flew in WITH DOCUMENTS that have since expired. Walls would not change this.

There are a couple criminals who slip across the border, but I haven't seen any evidence the two murderers Trumpettes rant about came across the border on foot thru the desert, so no ADDITIONAL physical barrier would've stopped them.

The only "crisis" is THE CRY-SIST of lil donny having to cry himself to sleep each night because the Adults in the Congress (Democrats one and all)  won't let him waste billions of tax dollars to feed his insatiable VANITY.

It appears you would go to any extreme to avoid an attempt at a rational argument.

I for one am waiting for you to attempt a rational argument.

For the third and last time, below are the arguments,.  Last time because, like I originally said, this is a waste of time.  There is OBVIOUSLY only peLOSER pinheads here who are not capapble of ratiopnal, intelligent discourse.  Only "I for one am waiting blah blah blah."  But not one single post that factual addressed the shutdown.  In summary, this is a site for peLOSER PINHEADS to come and agree with each other about how anyone who doesn't agree with them is wrong.  Have fun dummies.

There is one thing and one thing only to be debated. Should a wall be built? If the answer is yes the shutdown is the fault of the peLOSER pinheads regardless of how many idiotic, off-topic arguments are made. And here are the arguments for building it:

The peLOSER pinheads supported the wall until Trump became president. That's a simple fact. Their speeches FOR the wall are on tape. Were they lying then or are they lying now?

The Border Patrol say it's needed. THEY are the experts. Not you. Not me. Not Trump. Not peLOSER. And not some unknown person who peLOSER pinheads claim knows more than anybody else and is against the wall. They are the ones who are there doing the job.

Does it completely solve the problem? Nothing does. But It is one of several things they need to do their job. It has shown to reduce problems where it has been built (El Paso being the prime example) which allows them to direct more resources to other areas.

Please Produce One Example Of Where The - "Border Patrol" - said the Wall was needed?

In this Case the FACTS are irrefutable

Before 2006 there were over 1 Million Illegals per year entering the USA from Mexico with a high of 1.6 Million in 2000

TODAY THERE ARE LESS THAN 300,000 PER YEAR & THE MAJORITY OF THEM ARE COMING THROUGH - LEGAL PORTS OF ENTRY 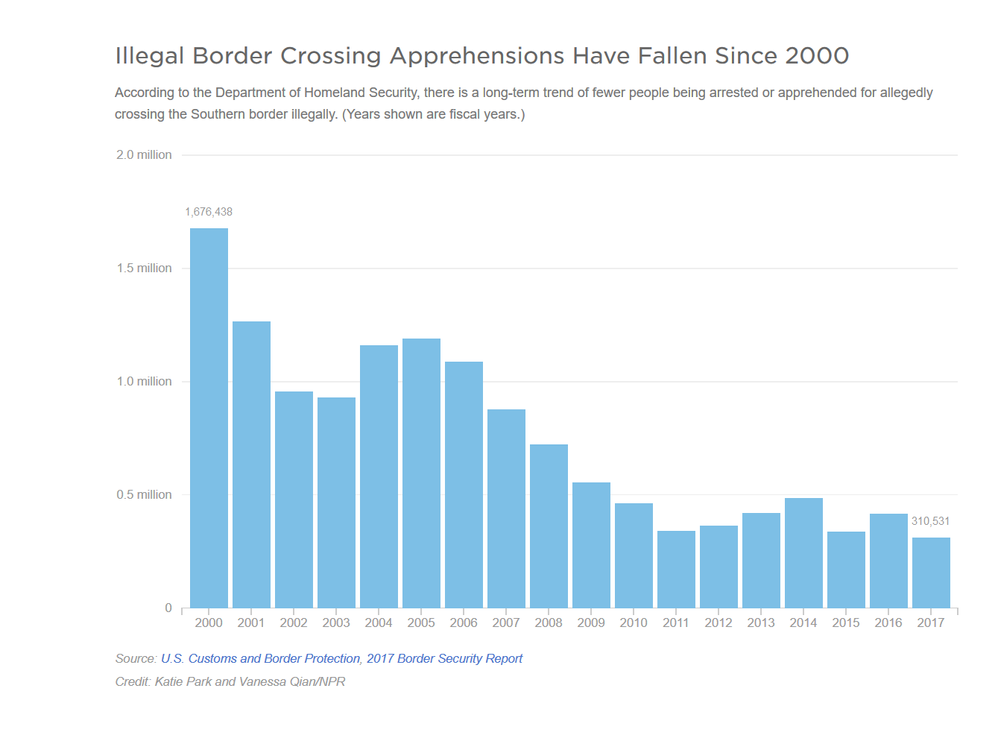 “He’s an outstanding man,” Trump told law enforcement officials in early December, hours after officially naming Barr as the nominee to succeed the beleaguered Jeff Sessions as attorney general. “During his tenure, he demonstrated an unwavering adherence to the rule of law... There is no one more capable or more qualified for this role.”

he told PBS NewsHour that presidential candidate Pat Buchanan’s proposal to erect a barrier along the entire U.S.-Mexico border amounted to a hat on a hat.

“I don’t think it’s necessary,” Barr told Jim Lehrer. “I think that’s overkill to put a barrier from one side of the border to the other… Illegal immigrants do not cross in the middle of the desert and walk hundreds of miles to the nearest city.”

@Tom5678 wrote:
your hypocrisy is stunning my friend.

Good one.  Anything to avoid rational discussion.  Straight out of the peLOSER pinhead playbook.  And by the way, you obviously don't understand the meaning of the word hypocrisy.

It's actually straight out of the peLOSER pinhead playbook.   Anything, ANYTHING, to avoid rational discussion while whining and lying about Trump.  Have you noticed that with all the left wing replies in this thread, IN ALL the threads, it's all the same, no substance, no rational arguments.  It's ALWAYS the same.

I have suspected the same.

Back to topic. In response to an earlier post of yours that Dems had done a 180.

Suppose you could tell us what House or Senate Democrats have spoken out and said that they do not support border security? I have heard all say that they were for border security and voted for the original White House budget request, which Senate repubs voted for also.

I'll be glad to remind "us" that Pelosi and Schumer (and those Dems who do what they are told) say the words that sound good but when it comes to the voting that is when they have "spoken out against border security".

Remember, these are the people who were all for fencing but now consider a wall as "immoral".

I hope I have been helpful to "us".

@Soosie wrote:
. Extortion is a crime. Why would anyone protect a criminal?

Then why stand by and watch trump use extortion to try and get his WALL ??????


Man learns from history that man learns nothing from history.
Report Inappropriate Content
0
Kudos
157
Views
Reply
0 Kudos
Turn on suggestions
Auto-suggest helps you quickly narrow down your search results by suggesting possible matches as you type.
Showing results for
Show  only  | Search instead for
Did you mean:
Users
Announcements

11 a.m. ET - Meet us ONLINE for Daybreaker LIVE x AARP present ¡Vamos a Bailar—Let’s Dance! Featuring Gloria Estefan, The Wailers, and more! Honor Hispanic Heritage Month, celebrate Latinx communities around the world and support the joyful dance spirit that we all need now more than ever.