Think folks have to do some research. Actually, we seniors pay a LOT LESS into Medicare and get LOTS MORE out of it. Social Security is a different story. I know we seniors fell we DESERVE IT. But I contend ALL folks, including folks that are now WORKING and STRUGGLING, deserve it. More so that the parasitic politicians who get SUBSIDIZED benefits and perks.

Have seniors really paid for Medicare and Social Security?

Few seniors have actually paid for their Medicare benefits. According to anUrban Institute estimate, the typical retired couple paid $122,000 in lifetime Medicare taxes but can expect to receive benefits worth $387,000. Social Security is another story. There, the average retired couple paid $600,000 in lifetime taxes for $579,000 in benefits. Put together, it's $722,000 in taxes for $966,000 in benefits. (All figures are adjusted for inflation.)

Most workers are paying into Medicare for seniors and some disabled, but it isn't fair that they have to pay taxes for Medicare, but can't access it while having to buy into the ACA.

Do you realize that most of the "seniors and some disabled" accessing Medicare today paid into Medicare for 30-50 years. In fact, anyone born after about 1940 (see Note) who reaches Medicare at the expected age on average -- and accounting for insurance pooling -- paid in via both payroll and income taxesall of the money they are now getting out or will be getting out.

"On average" and "accountign for the pooling" are the key words. That's the way insurance works. I know you think "insurance for health care is a failed policy," but 99% of us like the financial protection it provides. And what possible alternative would you suggest?

(Note: It was the bipartisan intention of the Congress that passed Medicare in 1965 that those born before 1940, particularly those born before 1900, get a "bonus" in terms of Medicare pay in and pay out. The 1965 design of Medicare was that those that began paying the payroll and income taxes then but did not begin using it until around 2010 -- those born after 1940 -- would be the first Medicare generation that paid its own way. This demographic group -- not coincidentially -- aligns with the so called "baby boom" post WWII.)

Just watching the non-stop 24/7 Big Pharma ads on TV and seeing the enormous profits that the CEOs are making makes us wonder how they can afford all this. Insurance for health care is a failed policy. The ACA is helping millions, but it isn't a cure as the premiums keep rising along with the deductibles and co-pays. The CEOs are out to make a profit from health care which isn't sustainable.

Most workers are paying into Medicare for seniors and some disabled, but it isn't fair that they have to pay taxes for Medicare, but can't access it while having to buy into the ACA.

Re: MEDICARE FOR ALL WOULD COST LESS 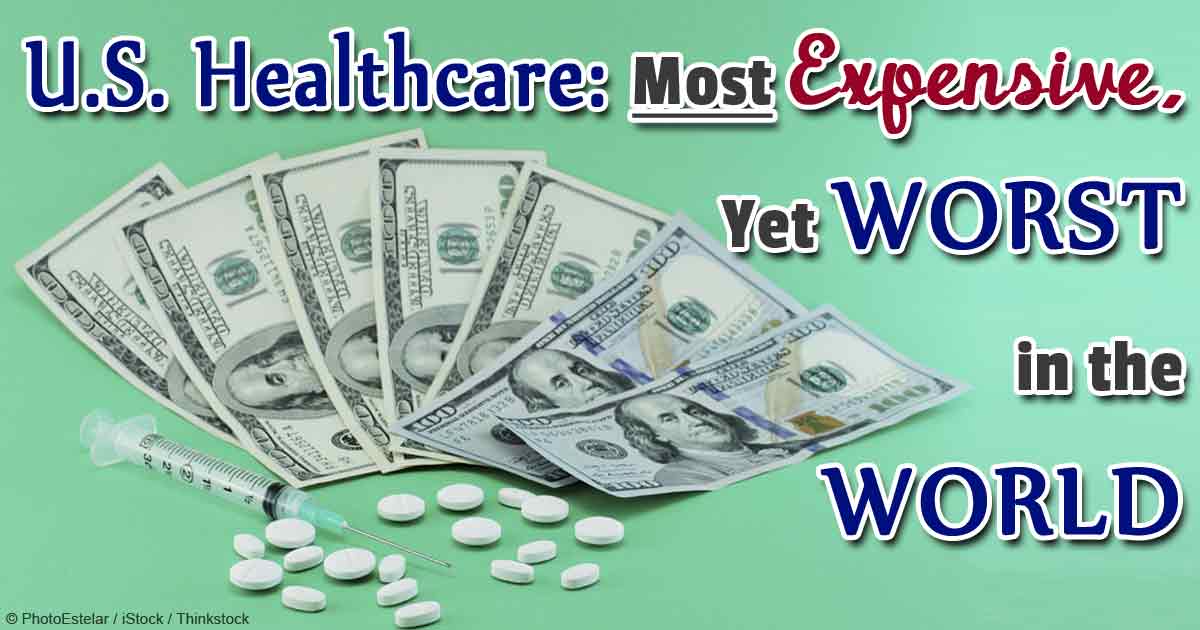 US Healthcare: Most Expensive and Worst Performing

Also your "purple report" is actually entitled "The Purple Health Plan" and was thought up and described by Laurence Kotlikoff in his blog post of 02/19/2016 in several different publications.

If you want to see all of Kotlikoff's 10-points, I posted on this about a month ago under the title "Another Lefty Economist Attacks Sanders' 'Medicare for All;' Pushes 'Ryancare for All.'

Given that it was published before Wyden-Ryan, it is more akin to the 1995 Democratic-Party/Urban-Institute voucher proposal that evenutally became public Part C of Medicare in 1997 signed into law by President Clinton.

It is inconceivable that someone thinks this plan is somehow supportive of Bernie Sanders' Medicaid for All or its financial structure. That person must have meant some other "The Purple Report."

It is high because we have access to so much and we use it.  Plus we don't have the cost constraints put on us and our health care providers that other countries have.

We have MORE MRI machines, more hospitals but not where we need them but fewer primary care physicians

Many of us, maybe most, don't have to have a "gatekeeper"

We have access to a wider formulary because we do not measure the cost of efficacy when a medication is approved.

We have cancer preventive reviews that are much looser than those of other countries.

We have MORE people with HepC, disbetes, health disease - although many of those other countries have higher smoking rates.

Re: MEDICARE FOR ALL WOULD COST LESS

WHO is telling you this?  And where is the analysis of how this could possibly be true.

Provide it and I will read and analysize it.

Remember Vermont tried to go to a single payer system UNTIL they found out how much it would cost and they thought they might just run employers out of the state.

The fact is that Bernie Sanders plan for Single Payer Health Insurance has been reviewed, not by the CBO - because it is not their job to do that analysis at this particular point in time.    Although Senator Sanders has proposed similar legislation over the years, it has not been analyzed by CBO.

There has been some "analysis" by HRC backing economists and there has been pushback by other economists both Right and Left leaning.    The point is that most economists without political affiliations agree that the sort of plan Bernie Sanders is proposing is more than sane - if just people would get over their political self.    (That was the analysis from Forbes economist - of which you can read by googling : the purple report).

Bernie's plan of Medicare for all doesn't work financially - at least not the way he described it.

Also your "purple report" is actually entitled "The Purple Health Plan" and was thought up and described by Laurence Kotlikoff in his blog post of 02/19/2016 in several different publications.

Here it is in the Huffington Post (same one that Forbes had - same name and words):

He doesn't even use any numbers but he did point out some interesting concepts in his plan.

BTW, the color purple in the title of his plan comes from a hybrid of red (for Republican) and blue (for democrats).

Those who want a single payer system or even a universal plan like other countries need to understand exactly how they work and how savings are accomplished and how much it will cost.

Sure it works for other countries and they are problably very pleased with their system however, they have rules which we don't have and defined best practices are tightly controled.  I believe that many here would have a hard time with it because it is so different than what our health care habits and routines are here because budgets are soooo tightly controlled.

I have posted the CommonWealths Fund International Review of Health Care Systems before so that you could begin to understand the differences between the systems and see what you like and what you don't like.

Controlling cost is going to be one of the biggest problems for us.

Do you ever wonder what it costs to SUBSIDIZE lawmakers and politicians?

When it comes to THEM receiving SUBSIDIZED help, of course, then, they don't refer to it as "socialism." Of course, they will tell you they DESERVE it because it's part of the "package."

You ever wonder why these dodo right wingers on MEDICARE don't address that? They will go along with the above and say THEY deserve it.

Some interesting reads on the GOP'S views on this stuff:

Yes, Ted Cruz is a hypocrite for going on Obamacare

The Breathtaking Republican Hypocrisy On Medicare

981 Views
Message 40 of 56
“They that can give up essential liberty to obtain a little temporary safety deserve neither liberty nor safety.” Ben Franklin Quote
Report Inappropriate Content
1
Kudos
981
Views
Reply
1 Kudo
Turn on suggestions
Auto-suggest helps you quickly narrow down your search results by suggesting possible matches as you type.
Showing results for
Search instead for
Did you mean:
Users
Announcements