What is creepy to me is Trump was friends with Jeffery Epstein and Gizelene Maxwell, serial sex offenders and child molesters, and suddenly Jeffery "hung" himself while in prison.

Trump said he knew them(many socialite pictures of them with Melania and Trump), but had a" falling out."

How did he know that?

They lived walking distance away in their respective mansions, is how.

Gizelene is in solitary without bedsheets, so she cant "hang herself" before she gets to court to name names.

You are who you run with.

This is the same guy connected with THE MISES INSTITUTE whose president, in a speech, mentioned "BLOOD AND SOIL", the NAZI call for the destruction of JEWS.

Where is Trump's DNA test on his recent law suit?

I suppose he will go to the Supreme Court on that one, too, only to be told he is not above the law.

Haven't heard much about this completely false accusation lately?  What happened? 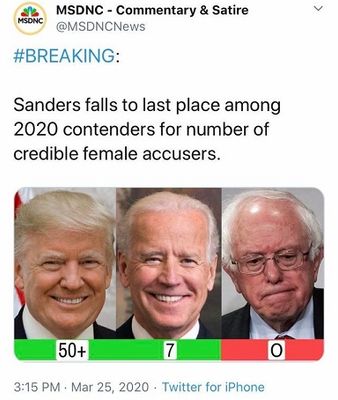 Ho Hum, another bogus attack on Joe Biden. That's his job, he will upload hundreds of posts between now and election day, making one phony charge after another, directed at Joe Biden.

Meanwhile, there's a pathological liar in the White House who insults people every day of the week, he's been accused of sexual assault by 24 different women, and he surrounded himself with convicted felons.

How many of his posts will mention any of the above between now and election day? We know the answer to that question, it will be ZERO.

So now you are quoting those that are connected to a neo-CONFEDRATE organization. Come on, @jimc91, can you NOT FIND legitimate resources????

Fishslayer777
Honored Social Butterfly
1
Kudos
441
Views
441 Views
Message 8 of 9
Most men at some point in their life acted like a pigs, president Trump included, but slow Joe is just creepy to me.

Libs are nuttier than squirrel poop

When professor Christine Blasey Ford accused then-Supreme Court nominee Brett Kavanaugh of having sexually assaulted her, without substantial corroboration or evidence, the liberal media made it the biggest national story for an entire month. It culminated in a dramatic Senate hearing, nearly derailing the conservative judge’s nomination. Now, Joe Biden wants to be president. There won't be any hearings to force the issue, but he too faces a similar allegation of sexual assault.

In fact, the Democrats' presumptive 2020 nominee faces an allegation that would have taken place after his elevation to public life, and the specific details of the charge against him are both better corroborated and more serious than the ones Blasey Ford brought forward.

Surely, the New York Times, CNN, MSNBC, the Washington Post, and others would make a point of covering such a thing, wouldn't they? True, we are currently amid the coronavirus crisis, but surely there's room for more than one story?

Reason journalist Robby Soave investigated the matter in detail, only to find zero mention of Tara Reade or her accusation, which she detailed in a recent podcast, across many of the most prominent liberal media outlets. Soave reports that “CNN conducted a virtual townhall event with the candidate last Friday. Reade's name didn't come up, and it has never appeared at CNN.com. At NBC, it's the same story: Chuck Todd interviewed Biden but didn't ask about the allegation.”

Additionally, Soave found only two tangential mentions of her name at the Washington Post, and no mention of Reade’s latest accusation at all in the New York Times. Even the left-leaning Columbia Journalism Review noted this glaring omission in coverage.

To add to the list, I searched the Atlantic and came up empty. So, too, no search resultsconcerning Reade’s new accusation come up at the New Yorker. Similarly, while their website’s search function is dysfunctional and confusing, I could find no reporting at the Los Angeles Times of the incident either.

There seems to be a pattern here.

Interestingly, some left-wing outlets such as the Intercept and Vox have covered the accusation, but major liberal national newspapers and networks have almost uniformly ignored it. (The Hill did cover it, in a television interview that’s worth watching.)

Out of 41 total questions, Biden didn’t face a single one about his new accuser.

"Despite the sad fact that it's unsurprising the liberal media have refused to even offer a news brief about Reade, it's still astounding that Biden can be asked over three dozen questions between three major TV networks and not a single one involved her," MRC's Curtis Houck, managing editor of Newsbusters.org, told me. "Biden's well-documented history of making women uncomfortable should have been even more of a reason to ask, but ignoring these new claims is what passes as journalism in 2020."

It all serves to illustrate a hypocritical double standard. When a Republican is accused of sexual misconduct, the liberal media revels in it, immediately painting him as guilty. Journalists show little hesitation to report on the story, no matter how suspect it turns out to be. But when a Democrat is accused? Complete silence.

Biden deserves the presumption of innocence, and we should afford him due process even in the court of public opinion. But that entails actually covering the story.

Perhaps journalists feel they can't acknowledge or take Biden's accuser seriously because of the guilty-until-proven-innocent standard they all helped create during the Kavanaugh affair.

VIMTSTL
Report Inappropriate Content
Tags (5)
1
Kudos
443
Views
8
Replies
Reply
1 Kudo
Turn on suggestions
Auto-suggest helps you quickly narrow down your search results by suggesting possible matches as you type.
Showing results for
Show  only  | Search instead for
Did you mean:
Users
Announcements