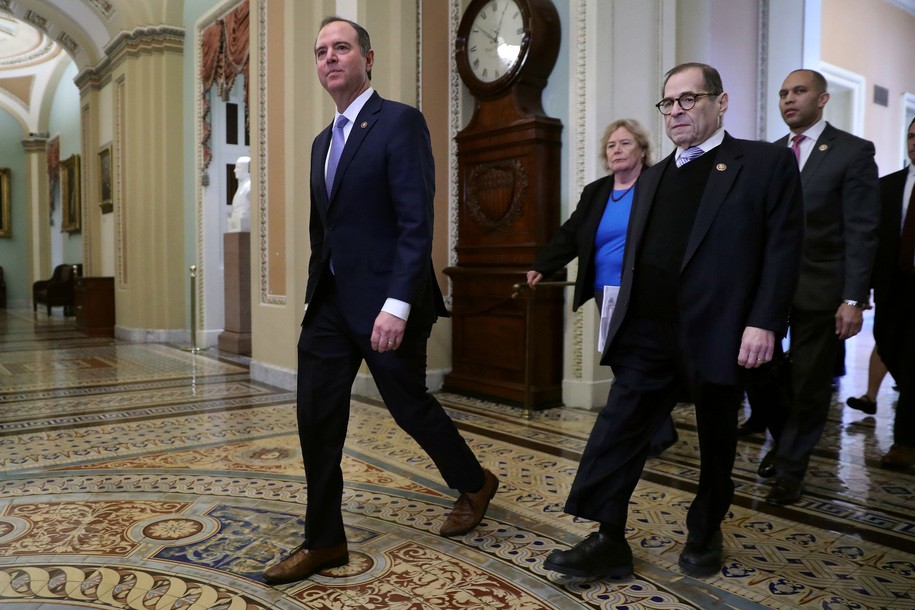 Opening arguments in the impeachment trial of Donald Trump begin at 1 PM ET on Wednesday, after a brutal nearly 13-hour day of procedural debate on Tuesday that ended at nearly 2 AM. Democrats offered a series of amendments to Senate Majority Leader Mitch McConnell’s cover-up plan, seeking to be able to call witnesses or subpoena new evidence that the White House has obstructed, but Republicans voted down proposal after proposal, making clear again and again that they do not want the facts.

On Wednesday, the House impeachment managers will begin to make their case, for which they have 24 hours over three days. That means arguments could stretch past 9 PM, depending on how many breaks the Senate takes. The day will be especially exhausting for Chief Justice John Roberts, who presides over the trial and will also be hearing arguments at the Supreme Court on Wednesday morning.

The House managers—Intelligence Committee Chair Adam Schiff, Judiciary Committee Chair Jerry Nadler, and Reps. Zoe Lofgren, Hakeem Jeffries, Val Demings, Jason Crow, and Sylvia Garcia—will lay out the case that Trump abused power and obstructed Congress. In fact, they already began to make that argument on Tuesday as they argued for why the Senate trial should include more witnesses and evidence, showing themselves to be far sharper and more prepared than Trump’s defense team, even before you consider that the facts are on the House managers’ side. Wednesday, they have the opportunity to put it all together uninterrupted.

Trump will spend most of the day in the air on his way back from Davos, Switzerland, where he conducted several typically lie-riddled interviews before leaving.

0 Kudos
64 Views
0
Share
Report
Reply
Turn on suggestions
Auto-suggest helps you quickly narrow down your search results by suggesting possible matches as you type.
Showing results for
Show  only  | Search instead for
Did you mean:
Users
Announcements