@Centristsin2010   You know well how much I have been chastized in this message board. because of my views.
But no, I am so sorry,   because you are correct. We should all feel rage, at what is happening in this country. and frankly, I don't see it.
I can help but looking at the future of this country and simply just resigning myself for what is to come.
I wish every day, that what I see are simply the ramblings of an old woman, and I wish every day, that I am incorrect.
But I am scared, because I see the erosion of this Democracy, and I don't see a plan to stop it.
I have visions of seeing Trump not leaving in Nov and most of us in this country saying  "oh well' he will have to leave in another four years.  and accepting that your elections are not valid, and doing nothing.
We  are all failing, perhaps this virus had taken away all our  strength and has left us so weak that we simply accept anything as long as it doesn't  touch us.
I am so very sorry. for all of us

After the Great Depression and especially after WW II  some Liberalism was adopted in America. It resulted in progressive taxes, work programs, Medicare, Social Security, The Equal Rights Act, Unions, Unemployment, etc, etc.

The Conservatives started an assault on all of those things during the late 1960's, accelerated that assault in the 1980's and here we are today. They dismantled unions, de-funded public education,  stagnated and lowered wages, started income tax on Social Security, moved manufacturing overseas, gutted progressive taxes and lowered taxes on the wealthiest by over 1/3, and have almost destroyed the Middle Class. They have empowered White Supremacist groups and individuals across America.

It's not just Trump.  It's all the things that led to Trump,  the conditions Trump was able to exploit to become President....

...I heard AOC say not long ago 60% of Americans make $ 40k a year or less.  If that is true it explains a lot.  The federal minimum wage is $ 7.25 an hour.  No wonder Social Security and Medicare are going broke. Automation and AI is taking a toll on jobs,  but people still need food and shelter...

....All of these people, basically worked a lifetime at low wages, many without health insurance...

I don't feel "enraged". It's more like disgusted. Over the past 20 years I've watched our country 'take one step forward and two steps back'. What we need is systemic change.

What's going on today was inevitable.

We were heading in this direction all along. Trump just put it on 'fast forward'. The pandemic exposed our system's weakness and Trump mishandled it.

I don't see much of a cure for our country coming soon. The next president (Biden) has already promised his rich donors "Nothing will fundamentally change."

When I go out in public I still see a lot of people not wearing masks. I always wear a mask, practice social distancing, and on occasion, look away if someone near me is not wearing a mask. I use hand sanitizer wherever available.

I was in Home Depot and suddenly a man walks away from the Customer Service counter and shouts out "I feel like I'm living in Russia!". I don't know what that was about.
Ten minutes later another man starts yelling about something or other.

In a convenience store someone cut in line. He didn't realize the people in line were standing six feet apart. When it was pointed out to him by the clerk he exploded and began yelling at the clerk.

I myself was on line in a supermarket when someone cut in front of me. He didn't see me because I was standing with my shopping cart a good six feet back. I politely called to him and pointed to the line behind me. He let out some swear words then left.

When Biden becomes president the rage will die down on the Democratic side and escalate on the Republican side. The Democrats will defend every move Biden makes and we'll be back to square one - then the cycle repeats. 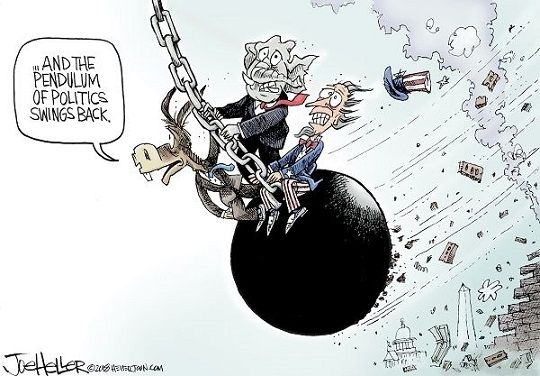 Once we finally rid ourselves of him, it will take years to recover. But as we do, we should never for a moment forget what he was and what he did to us. And we should never stop being angry about it.

It's not just Trump.  It's all the things that led to Trump,  the conditions Trump was able to exploit to become President.

I heard AOC say not long ago 60% of Americans make $ 40k a year or less.  If that is true it explains a lot.  The federal minimum wage is $ 7.25 an hour.  No wonder Social Security and Medicare are going broke. Automation and AI is taking a toll on jobs,  but people still need food and shelter.

Now we have this pandemic, and the vaccine research is going well,  because we worked on a SARS vaccine around 2006,  but we stopped, our government wouldn't fund it, it would have cost tens of millions of dollars,  now we're spending trillions.

All of these people, basically worked a lifetime at low wages, many without health insurance, many enduring racism, and we have to fight tooth and nail for unemployment insurance benefits for them during a pandemic.

Americans will adapt and find a way to deal with it.

Now I read Trump's secret police are being faced with walls of Moms,.  and Dads with leaf blowers who are trying to protect protesters.

Let me take you for a moment to a fantasy land. In this place, the coronavirus pandemic was bad for a couple of months but now it is largely under control. If you lived there you’d still be a little uncertain about going to a concert or a movie, but your life would have largely returned to normal.

You wouldn’t have lost your job; the government would have had a comprehensive support program that kept unemployment low. You’d be able to see your family and friends without fear. Your children would be returning to school in September. There would be some precautions to take for a while longer, but there would be no doubt that the pandemic was on its way to being defeated.

To us here in the United States, this picture seems magical, like a dispatch from the far future. But it isn’t. It’s the situation that exists right now in many of our peer countries around the world. And the fact that our situation is so different? That shouldn’t just make you feel disappointed, or anxious, or upset.

It should make you enraged. That is the proper response to where we find ourselves today.

Let’s begin with the situation in other countries. Here are new case totals from Monday for a few of our peer countries:

Even as the number of U.S. coronavirus cases passes 3 million, President Trump has repeatedly played down covid-19’s toll on the country.

Some of these countries were in extremely bad shape for a time, but with sane leadership and a population willing to work together, they’re in the process of defeating the pandemic. But not us.

There are many reasons we have experienced this catastrophe (and it quickly became two catastrophes, an economic crisis added to the public health crisis), but one stands above all others: President Trump.

Is there a single aspect of his response to this pandemic that has not been a miserable failure? For weeks he ignored warnings and denied that the pandemic would be a problem. He didn’t prepare the equipment and systems we’d need to respond.

We have no national testing strategy — still! There is no national contact tracing program. Trump turned over the effort to coordinate the distribution of supplies to his incompetent dolt of a son-in-law. He responded to efforts by governors to impose strong lockdowns by berating them and calling for their states to be “liberated.” For months he not only refused to wear a mask but also belittled those who did, successfully turning a vital public health tool into a polarized political issue.

And he demanded that everyone around him echo his insane claims that everything is under control and the pandemic is being vanquished. It was a month ago that Vice President Pence pathetically proclaimed that “we are winning the fight against the invisible enemy,” and the administration’s great success was “cause for celebration.”

And now, rather than working harder to contain the pandemic, the White House has begun a furious campaign to discredit the federal government’s chief infectious-disease specialist, Anthony S. Fauci, who has had the temerity to admit that things aren’t going well. Trump himself has clearly decided that he’s bored of worrying about the pandemic, so he’ll stop trying to do anything about it. With over 142,000 Americans dead and counting.

How can you look at what has happened to us and not be enraged?

Or think of the millions of children who will wind up losing a year or maybe more of their lives, without the opportunity to be educated, to build and sustain friendships, to just be kids.

Even if you’re lucky enough not to have gotten sick or lost a loved one, you’re the victim of a robbery. Trump stole so much from all of us — our time with friends and family, our mental health, even our faith that our country could meet a challenge.

Don’t let him get away with saying that it would have been worse were it not for him, or that we only have so many cases only because we’re doing more testing. Those are lies.

Anger is often toxic in our political lives. But there are times when our leaders — or in this case, one leader in particular — ought to be the target of every bit of anger we can muster. To give him anything less is an affront to the truth. To let our anger dissipate into a miserable resignation is to give him a kind of forgiveness he doesn’t deserve.

Before the pandemic, Trump was one of the worst presidents in our history. But now he has laid waste to our country, with his unique combination of incompetence and malevolence — and he’s not done yet. Once we finally rid ourselves of him, it will take years to recover. But as we do, we should never for a moment forget what he was and what he did to us. And we should never stop being angry about it.


"FAKE 45 #illegitimate" read a sign at the Woman's March in DC, 1/27/2017
Report Inappropriate Content
5
Kudos
434
Views
25
Replies
Reply
5 Kudos
Turn on suggestions
Auto-suggest helps you quickly narrow down your search results by suggesting possible matches as you type.
Showing results for
Show  only  | Search instead for
Did you mean:
Users
Announcements