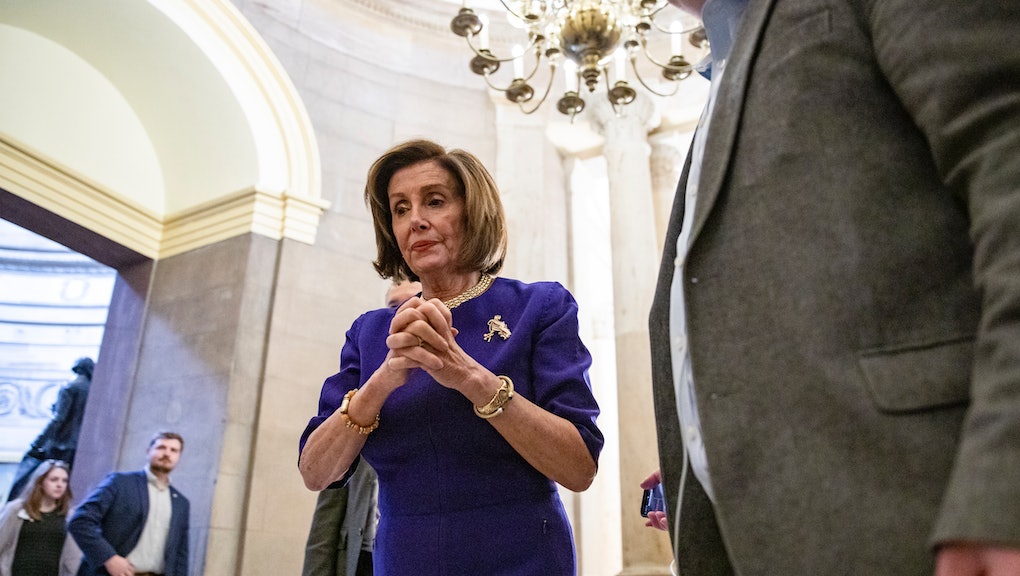 Samuel Corum/Getty Images News/Getty Images
A coronavirus relief bill called for free testing and expanded paid sick leave. Republicans stalled it
By Ezra Marcus
March 12, 2020
Washington was rushing toward a rare compromise between the White House and Democratic lawmakers on what to do for the first wave of assistance for those impacted by the rapidly spreading coronavirus. The goal of both parties is ostensibly to speed through immediate help, while punting for now on the much more politically contentious issue of a broad economic stimulus plan that could include tax cuts and bailouts for industry. The New York Times reported Wednesday that the coronavirus relief bill could include short-term funding for paid leave, increased unemployment insurance, food assistance, and money for small business.

Steven Mnuchin, the treasury secretary, said at a press conference Wednesday in Washington that he, House Speaker Nancy Pelosi (D-Calif.), and Senate Majority Leader Mitch McConnell (R-Ky.) were working “around the clock” on a solution for the relief package. “This is a little bit like a hurricane, and we need to cover these outside-of-normal expenses,” Mnuchin said.

Steny Hoyer, the second-ranking Democrat in the lower chamber, said the House would vote on its plan Thursday. But despite all the optimistic talk, the emergency legislation stalled overnight Wednesday as old partisan desires crept in. Republican leadership informed their Democratic counterparts Thursday morning that they opposed the bill in its current form, with Fox News's Chad Pergram reporting the specific gripes are with the degree of extension of paid sick leave, among other things.

42 people are talking about this

Staying home from work, school, and other community gathering places is encouraged by doctors to mitigate community spread of disease. The Washington Post additionally reported that congressional Republicans and the White House were worried about the bill's cost and "potential burdens on employers." The spending package, unveiled by Democrats late Wednesday, called for billions in relief measures, including $2 billion for state unemployment insurance programs, expanded paid leave benefits for affected employees, $1 billion in nutritional aid, and guaranteed access to free diagnostic testing for coronavirus, per the Post.

Trump has already signed an $8.3 billion coronavirus aid package. The administration has also proposed waiving payroll taxes, to the tune of around $800 billion, as an economic stimulus. This would be in the same ballpark of costs as the bank bailout in 2008. The proposal has faced stiff headwinds from both Republicans and Democrats, though, who would rather target stimulus at those who need it most. “We are just appalled at the administration,” said Senate Minority Leader Chuck Schumer (D-N.Y.), adding, “We don’t think they should just throw money out of an airplane and hope that some of it lands on the people” who need the help.

Senate Majority Leader Mitch McConnell dismissed the bill brewing in the House as an "ideological wish list" from Democrats. Senate Democrats have released their own version of a relief plan, meanwhile, which according to the Times includes block grants for communities where coronavirus has effectively ended economic activity, public transit assistance, a six-month break for people paying back student loans and mortgages, and money for child care centers and schools where the virus has been found.

Meanwhile, the administration is proposing a plan to allow everyone besides the ultra-wealthy and corporations to defer payment of their income taxes beyond Tax Day on April 15, which would be equivalent to pumping $200 billion into the economy, according to Mnuchin. “That will have the impact of putting over $200 billion back into the economy, and that will create a very big stimulus,” he said.

Republicans have watched Fox so long there's not a viable braincell in their entire caucus. They want to further impoverish workers by blocking the Democratic bill to extend paid sick leave so poor people will have to go to work and infect other poor people they come into contact with.

In 2008, they gave $900Billion to banks who caused the crisis, and now they want to use the same approach with the TrumpVirus. Give the money to EMPLOYERS who MIGHT pass it on to their workers, but if not, its all good for GOPers.

Meanwhile they still plan to throw 700,000 low income people off foor stamps - the workers most likely to need assistance for groceries and DELAY people paying taxes, income and FICA, in the hope they'll spend the money and have to go deeper in debt when they taxes finally come due.

The people most affected will need assistance now, not later. They are the same folks that do not have the same resources as steve manuchin. They may not have the money for a two week cushion. Let's just admit, trump and his administration don't care about Our Citizens...and it's showing.

McConnell refuses to put any Democrat written or Partisan written House Bills into Committee or onto the Senate Floor for a vote. He doesn't do this by merit but for pure partisan reasons

With the threat of this virus and the scale that it will reach his gross partisanship should be put aside for the welfare of all Americans. He places his hatred for Pelosi and the Democrats above the welfare of the American people.

I hope the people of Kentucky remember this in November and they vote his vile rear-end out of the Senate seat he holds.


Man learns from history that man learns nothing from history.
6 Kudos
203 Views
0
Share
Report
Reply
Turn on suggestions
Auto-suggest helps you quickly narrow down your search results by suggesting possible matches as you type.
Showing results for
Show  only  | Search instead for
Did you mean:
Users
Announcements