Lindsey Graham apparently needs money for his Senate reelection campaign. And so the South Carolina Republican has taken his appeal for funds to an unusual venue: cable news.

Specifically, Fox News. In a pair of interviews on the network on Thursday, Graham pleaded with Fox viewers for campaign cash, in an emotional appeal almost as weepy as Jerry Lewis in one of the later hours of his old charity telethons.

“I’m getting overwhelmed,” he told prime-time host Sean Hannity. Then, he turned to Hannity’s viewers, adding: “Help me. They’re killing me moneywise. Help me. You did last week. Help me again.”

A few hours earlier, on the “Fox & Friends” morning program, Graham delivered a similar message. “My opponent [Democrat Jaime Harrison] will raise almost $100 million,” he said. “I’m being killed financially. This money is ’cause they hate my guts,” he said, apparently referring to Democrats.

Politicians appearing on TV news often sneak in a reference to their campaign websites in an effort to attract supporters and their contributions. But such a direct appeal for donations, especially in a news interview on such a high-profile venue as Fox, is rare.

Fox has often been accused by critics of favoring Republicans, and President Trump in particular. Frequent appearances on the network can help boost a candidate’s profile and conservative bona fides.

But it doesn’t regularly feature politicians using their airtime to advance fundraising goals. Graham’s comments assume Fox’s audience is sympathetic to him and supports his reelection.

As it was, Graham’s reelection campaign wasn’t even the intended topic when he was booked on Fox, according to a network spokesperson. The ostensible reasons for interviewing him were to elicit his comments on a Senate report about former vice president Joe Biden’s son, Hunter, and about President Trump’s expected Supreme Court nominee. (Graham has said he favors pushing forward with the nomination only days before the election, despite opposing a vote on President Obama’s nomination of judge Merrick Garland in 2016 under similar circumstances).

Graham seemed to bring up the subject of money unprompted, as a kind of add-on to the interviews. During his interview with Hannity, he slipped it in after the host said, “I’ve got to run.”

Fox “had no knowledge that he would solicit donations on air,” the network said in a statement.

As a general matter, news organizations are broadly exempt from federal campaign finance regulations that prohibit candidates from soliciting funds during TV interviews without a series of disclosures and disclaimers, said Brett Kappel, a Washington lawyer who specializes in campaign-finance, lobbying and government-ethics laws.

The Federal Election Commission has never sanctioned — or even warned — a major media outlet for not having the required disclaimers during a broadcast interview in which a candidate solicited funds, he said.

But any complaint about the lack of disclaimers would implicate both the candidate and the station that broadcasts the solicitation, Kappel said: “Running solicitations without disclaimers would raise the issue of whether [Fox] crossed the line from a protected press entity and became a corporate contributor to Graham’s campaign.” While the likelihood of enforcement action is low, “it would be an issue [Fox] wouldn’t want to have to address.”

Graham, a close ally of President Trump’s who is seeking his fourth term in the Senate, has won reelection with ease in the past. But this year, he is facing a close race against Harrison, a former state legislator and state Democratic Party chair. Recent polls indicate that the race is a toss-up.

Harrison, however, has consistently outraised Graham. In August, he pulled in about $10.6 million, more than Graham’s entire haul during the second quarter, according to federal disclosures. Graham’s support of a speedy vote to replace the late Supreme Court Justice Ruth Bader Ginsburg led to a surge in fundraising for Harrison this week, which may explain Graham’s plea for money on Fox.

Harrison threw Graham’s Fox comments back at him. Over a clip of Graham’s appearance on “Fox & Friends,” he tweeted, “Anybody else get the sense that @LindseyGrahamSC just realized he’s going to lose on November 3rd?”

"I want you to hold my words against me".

Are you holding the Senator's words against him as he requested?

We have to reject this demagoguery and if we don't reject Donald trump, we have lost the moral authority in my view to govern this great nation."

Donald Trump and moral authority in the same sentence (not quite sure it is a sentence) Trumpettes have no shame.

If there’s a Republican president in 2016 and a vacancy occurs in the last year of the first term, you can say, “Lindsey Graham said, ‘Let’s let the next president, whoever it might be, make that nomination,’” and you could use my words against me, and you’d be absolutely right.

Trump is an aperture in the fundament.
2 Kudos
448 Views
0
Share
Report
Reply

Poor LG - he is so accustomed to using other people's money that he has probably done little to save any of his own.

Now he is faced with the prospect of actually having to "ask" for money because his opponent has been able to garner more campaign donations.

He has entered a land where the only people who will be around are the boot lickers for donald - as all the other Republicans are running away from his campaign. 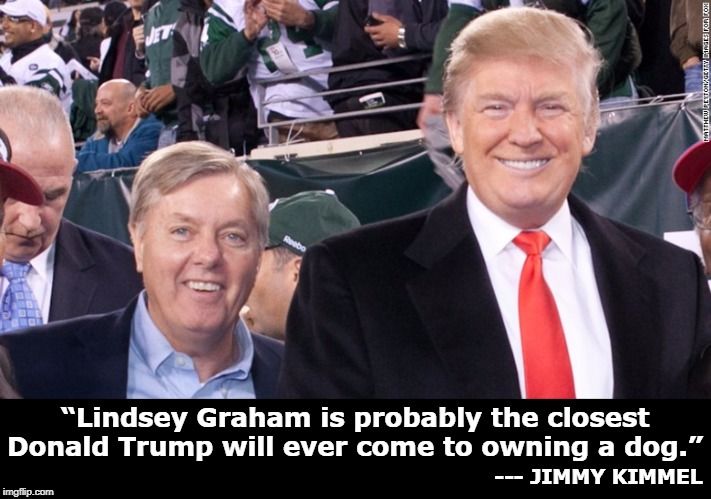 This has to be the most hilarious, tongue in cheek article yet about the racist and double talking Lindsey.    To get the real humor, one must read to the bottom of the article.   https://www.theroot.com/lindsey-graham-finally-understands-righteous-america-s-1845179431

As Lindsay is quoted as saying, at the 1:33 mark in the video Ms. Stretch posted, "This is a defining moment in the future of the Republican Party.  We have to reject this demagoguery and if we don't reject Donald trump, we have lost the moral authority in my view to govern this great nation."

As Lindsay is quoted as saying, at the 1:33 mark in the video Ms. Stretch posted, "This is a defining moment in the future of the Republican Party.  We have to reject this demagoguery and if we don't reject Donald trump, we have lost the moral authority in my view to govern this great nation."

IMO, the Republican Party lost the Moral Authority to govern this great nation, when they nominated trump.

In the hypocracy department of his soul.

If the people in So. Carolina elect this individual  perhaps it is time to say that they deserve the kind of government that they will have.

Don't blame the victims.  They lack the ability to think for themselves.

Don't blame the victims.  They lack the ability to think for themselves.

I will agree, they do seem to have lost the ability to think for themselves. Disgusting in this day of instant information at our fingertips. They fact check nothing.

He is in deep do do.

He is in deep do do.

Let's hope it engulfs him.

Tom5678
Honored Social Butterfly
why not go to Trumps favorite money laundering bank, Deutsche, the only one who will work with him now and take out a loan? Lol!
3 Kudos
755 Views
0
Share
Report
Reply
Turn on suggestions
Auto-suggest helps you quickly narrow down your search results by suggesting possible matches as you type.
Showing results for
Show  only  | Search instead for
Did you mean:
Users
Announcements