The leading indicator of gun sales jumped in August, driven in part by Americans seeking self-protection and deep concerns congressional Democrats are going to push through expanded gun control legislation.

The industry group said that August FBI background checks adjusted for sales surged 15.2% over August 2018. The adjusted August number was second only to August 2016 during the heated presidential election.

The new surge came in the wake of heightened pressure for gun control, sales bans on military-styled rifles, and limits on ammo following a spike in mass shootings.

Analysts said that it might be the start of a 2016-style buying binge. Then, calls by Democratic presidential nominee Hillary Rodham Clinton for gun control and an assault weapon ban led to the highest yearly sales and background checks ever.

Justin Anderson, the marketing director for Hyatt Guns in Charlotte, North Carolina, one of the nation’s largest sellers, said fears of a liberal gun grab and a drive for self-protection are pushing sales higher.

“As we’ve seen in the past, the recent publicizing of mass shootings has fueled people’s concerns about their personal safety. We are seeing many first-time gun buyers, and our concealed carry classes are booking up quickly,” said Anderson.

“Political figures talking about gun bans and confiscation is also starting to figure into sales. We’ve seen a slight uptick in the sale of tactical rifles as a result,” he added. 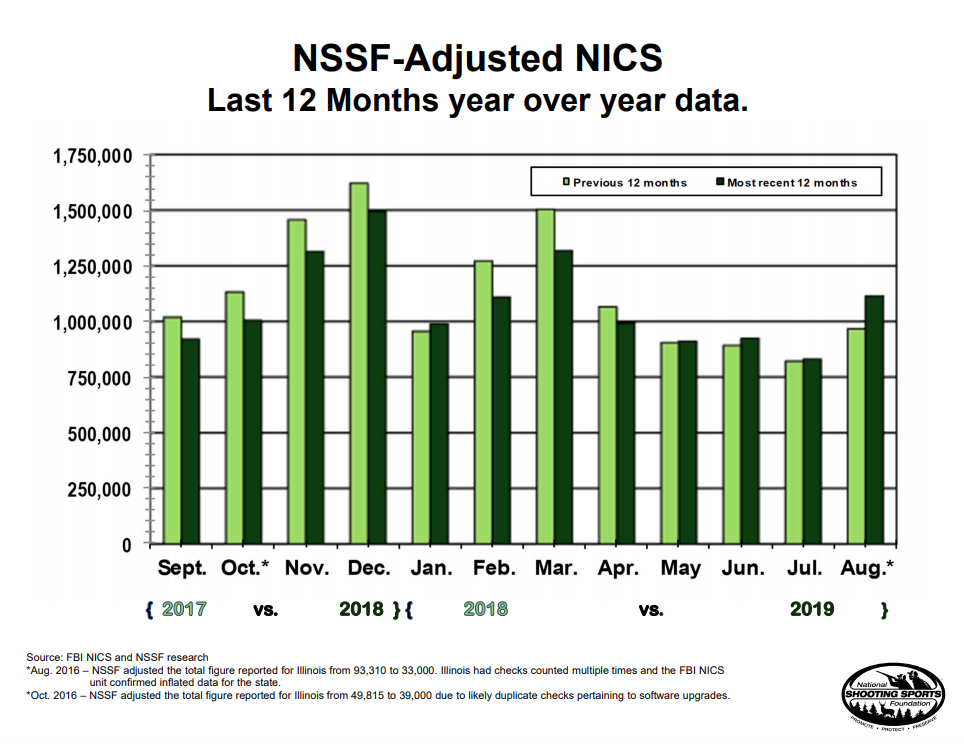 The NSSF adjusted number was 1,113,535 for August, compared to 966,809 for August 2018. It explained: “The adjusted NICS data were derived by subtracting out NICS purpose code permit checks and permit rechecks used by states for CCW permit application checks as well as checks on active CCW permit databases. NSSF started subtracting permit rechecks in February 2016. Though not a direct correlation to firearms sales, the NSSF-adjusted NICS data provide an additional picture of current market conditions.”

The industry group noted that some states saw huge spikes.

VIMTSTL
Report Inappropriate Content
Tags (5)
0
Kudos
111
Views
0
Replies
Reply
0 Kudos
Turn on suggestions
Auto-suggest helps you quickly narrow down your search results by suggesting possible matches as you type.
Showing results for
Search instead for
Did you mean:
Users
Announcements