Amazing what some will do for publicity and even more astounding that there will be believers.  .

Some people won't see this train coming until it runs them over. 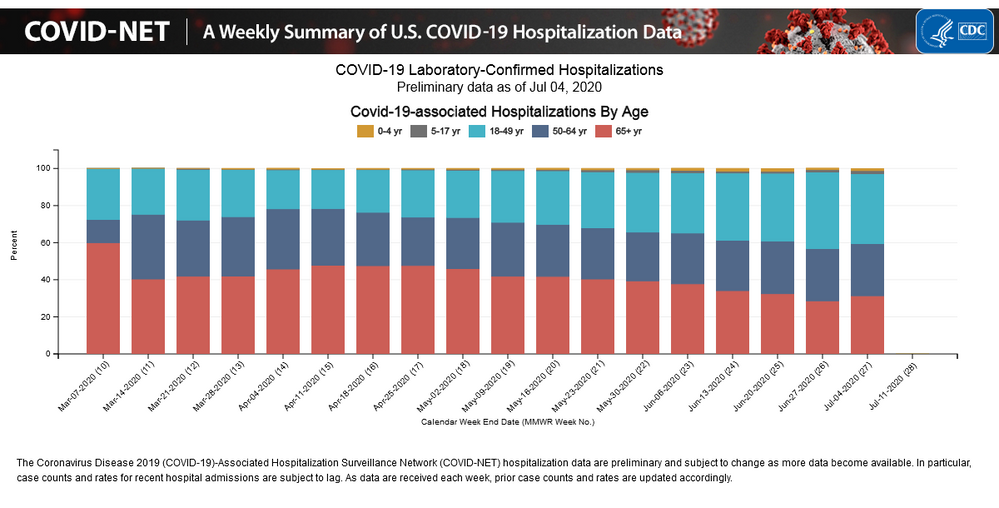 Well done Panjandrum, but no one believing in extreme radical right propaganda would ever agree.

Yeah FACTS ARE FACTS. Nobody disputes them. EVER. And here they are, right here:

"Hospitalization rates increase with age and are highest among older adults; the majority of hospitalized patients have underlying conditions... 89.3% had one or more underlying conditions. The most commonly reported were hypertension (49.7%), obesity (48.3%), chronic lung disease (34.6%), diabetes mellitus (28.3%), and cardiovascular disease (27.8%)." - Hospitalization Rates and Characteristics of Patients Hospitalized with Laboratory-Confirmed Coronavirus Disease 2019 - COVID-NET, 14 States, March 1–30, 2020 http://www.cdc.gov/mmwr/volumes/69/wr/mm6915e3.htm

“The death rate in a given country depends a lot on the age structure, who are the people infected, and how they are managed,” Ioannidis said. “For people younger than 45, the infection fatality rate is almost 0%. For 45 to 70, it is probably about 0.05%-0.3%. For those above 70, it escalates substantially.” - https://www.washingtonexaminer.com/news/stanford-doctor-coronavirus-infection-fatality-rate-for-peop...

“The great majority of people will not die from this. Most people will not get this virus at all. Of those who do, some of them will get the virus without even knowing it, they will have the virus with no symptoms at all. Of those who get symptoms, the great majority, probably 80%, will have a mild or moderate disease, not bad enough for them to have to go to the doctor. An unfortunate minority will have to go as far as the hospital, but the majority of those will just need oxygen and will then leave hospital. And then a minority of those will end up having to go to severe end critical care and some of those sadly will die. But that’s a minority, it’s 1% of possibly even less than 1% overall. The great majority of people, even the very highest groups, if they catch the virus, will not die. And I really wanted to make that point really clearly.” - Christopher John MacRae Whitty CB FRCP FFPH FmedSci, Chief Medical Officer England, Chief Medical Adviser UK: https://youtu.be/adj8MCsZKlg

CDC says overall death rate for COVID-19 only a fraction of a percent, 0.26%.

“For the first time, the CDC has attempted to offer a real estimate of the overall death rate for COVID-19, and under its most likely scenario, the number is 0.26%…The CDC estimates the death rate from COVID-19 for those under 50 is 1 in 5,000 for those with symptoms, which would be 1 in 6,725 overall, but again, almost all those who die have specific comorbidities or underlying conditions. Those without them are more likely to die in a car accident. And schoolchildren, whose lives, mental health, and education we are destroying, are more likely to get struck by lightning.” https://technocracy.news/cdc-confirms-extremely-low-covid-19-death-rate/

Japan Ends Coronavirus Emergency With Only 850 Deaths and No Lockdown: https://www.telegraph.co.uk/news/2020/05/25/japan-end-state-emergency-tokyo-cases-dwindle-despite-lo...
Cases are up, but only because more testing is being done. Most positive cases don't even involve symptoms, doctor visits or hospitalizations and DEATHS are way down. On June 23, Trump tweeted:
"Cases up only because of our big number testing. Mortality rate way down!!!"
Cases are MILD, deaths are WAY DOWN. There is no valid argument for continued restrictions and lockdowns. Anything less than FULL BORE operations is a criminal act by the US Gov't and all state governors who participate.
Report Inappropriate Content
0
Kudos
590
Views
Reply
0 Kudos
Highlighted

Meanwhile, most people who are dealing with reality on a daily basis have been following information from both US and global reporting groups.    Financial Times made a decision early on in the pandemic to allow US readers to read on a real time basis what was happening in all of Europe,  which also includes Germany.

Combined with its six-week shutdown, Germany’s “track and trace” system has been instrumental in stalling the spread of Covid-19 and preventing it from overwhelming the health system.

It has also helped that the country has a well-oiled government, led by Angela Merkel, a physicist, that has avoided the screeching policy zigzags seen elsewhere. On April 17, authorities announced that the pandemic was under control — less than six weeks after Germany’s first deaths from Covid-19.

Thank you! Perhaps those were the words I was looking for...the accumulative effect of the right wing cesspool of false accusations, lies, and distorted facts...just another trump condition!

williamb:  How do we comment or address the fact of how gullible people are. With any pro trump supporters, or pro trump positions, do we want to throw up our arms and just say, what are you thinking? All you believe are trump lies.

I think it's important to realize what a cesspool the rightwing media has become over the last decade or more. It's extremely lucrative to publish what  people want to believe, the truth be damned.

How do we comment or address the fact of how gullible people are. With any pro trump supporters, or pro trump positions, do we want to throw up our arms and just say, what are you thinking? All you believe are trump lies.

Centristsin2020:   Well done, Panjan....our Right Wing extremeists are fre3aking out, along with trump as he falls in the polls.....

Something I don't get is how people can be fooled by something so obviously false. There must be lots of money being made by publishing that sort of thing.

Report Inappropriate Content
2
Kudos
1294
Views
Reply
2 Kudos
Turn on suggestions
Auto-suggest helps you quickly narrow down your search results by suggesting possible matches as you type.
Showing results for
Show  only  | Search instead for
Did you mean:
Users
Announcements