Washington (CNN)A Republican member of one of the House committees involved in the impeachment inquiry into President Donald Trump said Sunday that information provided about Trump during a closed-door deposition of a former National Security Council official "is alarming" and "not OK."

"Well, of course, all of that is alarming. As I've said from the beginning, I think this is not okay. The President of the United States shouldn't even in the original phone call be on the phone with the president of another country and raise his political opponent," Rep. Mike Turner, an Ohio Republican, told CNN's Jake Tapper on "State of the Union."
"So, no, this is not OK," he added on Sunday.
On Saturday, Morrison testified that US ambassador to the European Union Gordon Sondland was acting at Trump's instruction in his dealings with Ukraine. According to Morrison's deposition, Sondland said the President told him that Ukrainian President Volodymyr Zelensky "must announce the opening of the investigations" into former Vice President Joe Biden and his son, Hunter Biden. Morrison also testified that US aid to Ukraine was conditioned on the country announcing an investigation into the Bidens. There is no evidence of wrongdoing by either Biden in Ukraine. 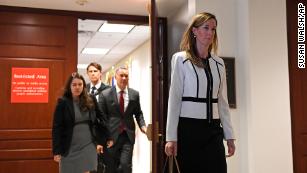 Morrison's testimony, which was released by House impeachment investigators on Saturday, adds additional corroboration to the testimony of others, like US diplomat Bill Taylor, that Sondland said he was acting at Trump's direction when he was urging Ukraine to announce political investigations.
In his CNN interview on Sunday, Turner also addressed tweets Trump posted last week during former Ukrainian Ambassador Marie Yovanovitch's public testimony before the panel. Responding in real-time to the President's tweets, which claimed that "everywhere Marie Yovanovitch went turned bad," the former official said they were "very intimidating."
"It's certainly not impeachable, and it's certainly not criminal and it's certainly not witness intimidation. It certainly wasn't trying to prevent her or wouldn't have prevented her from testifying, she was actually in the process of testifying. But nonetheless, I find the President's tweets unfortunate," the congressman said.
"I think along with most people, I find the President's tweets, generally, unfortunate," Turner said.
Ex-NSC official corroborates Sondland said he was directed by Trump on Ukraine

The fact Turner didn't think "abuse of office" was grounds for Impeachment is another reason the good citizens of Ohio need to remove him next November.

That was one of the charges included in the Bill of Impeachment for both Johnson and Clinton, and is most definately an "impeachable offence", and unlike the first two so charged tRump is GUILTY of the crime.

You were right again, OlderScout.  Mike Turner voted NOT to impeach trump on both accounts, though trumps was impeached anyway.....  Once again showing the hypocrisy of the GOP.


"FAKE 45 #illegitimate" read a sign at the Woman's March in DC, 1/27/2017
0 Kudos
86 Views
0
Share
Report
Reply
Turn on suggestions
Auto-suggest helps you quickly narrow down your search results by suggesting possible matches as you type.
Showing results for
Show  only  | Search instead for
Did you mean:
Users
Announcements