The sad fact is too many people in America watch Fox and therefore have no idea what Der Trumper has already done to destroy the Obama recovery and destabilize the World order.

I don't have TV and don't watch FOX, so can't be included in this statement.

I am aware of the changes, reversals and corrections that President Trump's administration has brought us, and am quite happy with the direction our nation is going. I also happen to be happy with my life.

I'd say my (life long) decision to NOT watch TV and to sort out my own feelings about current events has been instrumental in my ability to be happy with the here and now as I believe that thinking for oneself is the foundation of happiness.

"The key to success is to keep growing in all areas of life - mental, emotional, spiritual, as well as physical." Julius Erving
Report Inappropriate Content
1
Kudos
178
Views
Reply
1 Kudo
Highlighted

The fact Presiden Obama pulled the Nation out of the worst recession since the Great Depression of the 1930's is the reason most people think we're going in the right direction - up from the disaster the Republicans created by legalizing the transformation of Wall Street and our Banks into a huge casino with the "in crowd" taking huge bets with other peoples money.

But there's another Gallup poll that paints a very different picture. The Gallup Share-Care Wellness poll, a measure of how people actually feel about their lives, is at the lowest level in history, with a record 21 states reporting significant declines in their citizens sense of well-being, and not a single State reporting an increase.

Obama got us out of the serious fighting in the mideast, but Der Trumper threw us back in. Obama got us out of the worst financial disaster since the Great Depression, but Republicans are working to remove the safety regulations that prevented it from happening again. Obama gave 34 million Americans health care and for the first time in history, SLOWED the growth of health care costs for Americans, but Der Trumper and the Republicans have managed to pass legislation that will throw millions off their health insurance and into the ER for their family care.

The sad fact is too many people in America watch Fox and therefore have no idea what Der Trumper has already done to destroy the Obama recovery and destabilize the World order.

WASHINGTON, D.C. -- Thirty-eight percent of Americans are satisfied with the way things are going in the United States today, similar to last month's 37% satisfaction rate but marking the numerical high since a 39% reading in September 2005. 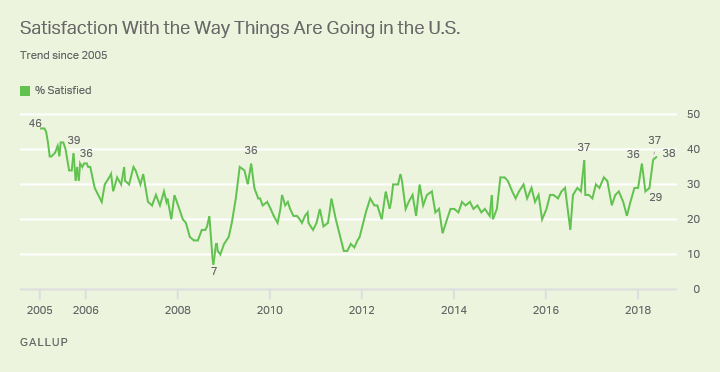 Satisfaction with the nation is now back to the historical average of 37% for this trend, which was first measured in 1979, but is far below the majority levels reached in the economic boom times of the mid-1980s and late 1990s.

including the shrinking of the unemployment rate to levels last seen in 2000 and the continuation of an economic expansion that is now the second longest on record. Other prominent national news stories have included independent counsel Robert Mueller's investigation into Russian collusion; President Donald Trump's decision to withdraw the United States from the Iran nuclear deal; and Trump's negotiations with North Korea that culminated in his meeting Tuesday with North Korean leader Kim Jong Un.

Rise in Republican, Independent Satisfaction Pushes Rate Up Over Past Two Months

Differences by place of residence, age, gender and education are mostly not as large as by party identification, and the amount of change from March-April to May-June was fairly uniform within the former groups. Democrats were the only major demographic group to show no increase in satisfaction. Those in groups that tend to have more Democrats than Republicans -- those younger than 35, city dwellers, women and those with postgraduate work -- are least likely to be satisfied, but satisfaction levels rose for all of these groups in the May-June aggregate.

Though the vast majority of Americans have expressed pride in their country in polls stretching back more than 30 years, their pride has not meant they were satisfied with the way things were going. This has been especially true during times of economic duress -- though measuring the public's satisfaction with the nation encompasses far more than economics.

Now, at the midpoint of 2018, as the United States continues to enjoy a nine-year-long economic expansion, the number of Americans finding satisfaction in the country's direction is on the rise. This reflects more than a growing comfort with Donald Trump as president; growth in satisfaction has outstripped growth in Trump's approval rating. And it is more than economic good news -- the percentage satisfied has risen more over the past two months than the percentage who think the economy is in good shape or the percentage who think it's a good time to find a quality job.

As the nation moves toward November's midterm elections, as the Mueller investigation continues to unfold, as Trump continues to surprise both friends and foes with his actions, there are a multitude of possibilities for news that could affect satisfaction significantly in either direction.

VIMTSTL
Report Inappropriate Content
1
Kudos
178
Views
12
Replies
Reply
1 Kudo
Turn on suggestions
Auto-suggest helps you quickly narrow down your search results by suggesting possible matches as you type.
Showing results for
Search instead for
Did you mean:
Users
Announcements