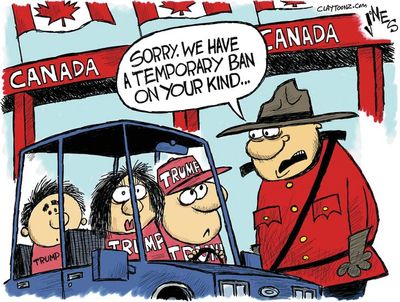 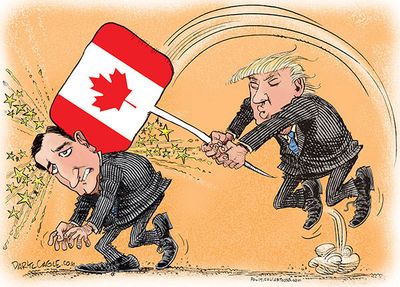 Donald Trump and his advisers threw all these insults....and more...at Prime Minister Justin Trudeau and Canada in the wake of the G7 summit meeting in Quebec over the weekend.

We are writing to apologize to Justin Trudeau and the people of Canada for the abhorrent and repulsive behaviour of Donald Trump. It is impossible to tell if he is mentally ill, ignorant or evil. He does not represent the values of the United States.
History clearly teaches us that bullies must never be allowed to go unchallenged. The inexcusable and terrible disruption exhibited by Donald Trump must be met with courage. We have great respect for Canadians — your values, leadership, friendship, courage and actions.
Trump’s shameful attacks on democracy and on our allies do not represent the vast majority of Americans. Hopefully, this nightmare will soon pass and we and our allies can begin a return to normality. - Joy R. Efron and Leonard Efron, Los Angeles

I write as a U.S. citizen to apologize to Prime Minister Trudeau and to all Canadians for the irrational and boorish behavior of our president. Please don’t think that the United States has suddenly turned into a nation of arrogant and uninformed fools.
This behavior does not reflect the spirit and values of the U.S. at large nor does it reflect on how the vast majority of U.S. citizens view Canada and Canadians — with respect, admiration and affection. - K. Johnson, Naples, Florida

I am a loyal American who loves my country. I am, however, dismayed by what took place in Quebec this weekend. I wish to extend to the United Kingdom, France, Germany, Japan, and most of all Canada my sincere apologies for the terrible behaviour of the man unfortunately occupying the White House now. - Jonathan Stein, Tequesta, Florida

I am an American living in Maine and would like to apologize to all Canadians for the boorish behavior of Donald Trump the past few days. There is no excuse and I am embarrassed to be identified in any way with this president. My husband and I lived for several years in Gore’s Landing, Ontario, and were welcomed with open arms and courtesy by all the Canadians we came in contact with.
I hope that our two countries can grow beyond this rift, and get back to the relationship we have enjoyed for decades. - Laura Johnson, Harpswell, Maine

Finally, a president with the guts to stand up to Canada

O Canada: You had it coming, eh.

They inflicted Nickelback on us. We did nothing.

They sent us Justin Bieber . We turned the other cheek.

They were responsible for one abomination after the other: Poutine. Diphthong vowels. Hawaiian pizza. Instant mashed potatoes. Ted Cruz.

Still, we did not retaliate — until now.

Finally, the United States has a president with the brains and the guts to stand up to the menace of the north. This weekend President Trump called Canadian Prime Minister Justin Trudeau “meek,” “very dishonest & weak” for protesting U.S. tariffs. Trump’s trade adviser said “there’s a special place in hell” for Trudeau, and Trump’s economic adviser said Trudeau “stabbed us in the back” and is guilty of “betrayal” and “double-crossing.”

How do you feel now, Canada? Or, to put it in a language you understand: How’s she bootin’er?

Trudeau earned his place in the underworld for some truly appalling rhetoric, saying “we’re polite, we’re reasonable, but we also will not be pushed around.” Offensive! He also found it “kind of insulting” that the Trump administration said it was imposing tariffs on Canadian goods “for a national security reason” given that Canadians “stood shoulder to shoulder with American soldiers in far off lands in conflicts from the First World War onward.”

Canada is not a national security threat to the United States? Au contraire, as they say in (very foreign) Quebec.

Trudeau conveniently omits the invasion of Detroit from Canada in 1812. And there was that ugly dispute in 1844 when soon-to-be President James K. Polk wanted the U.S. border to extend all the way north to Alaska at 54 degrees, 40 minutes latitude (slogan: “Fifty-four forty or fight!”) but was forced to accept the 49th parallel, a humiliation that denied us Vancouver and many great Chinese restaurants.

And let’s not even get started about the softwood lumber dispute. Too painful.

That stuff would be funny if it wasn't so sad, and so serious.

Report Inappropriate Content
Reply
3 Kudos
Turn on suggestions
Auto-suggest helps you quickly narrow down your search results by suggesting possible matches as you type.
Showing results for
Search instead for
Did you mean:
Users
Announcements