"Our death totals, our numbers, per million people, are really very, very strong," President Donald Trump boasted on Thursday, despite the fact that the US ranks far worse than most countries in deaths-per-million people from Covid-19, according to Worldometers. "We're very proud of the job we've done," Trump gushed.

"Strong" is not the word that comes to mind looking at the country with the world's highest number of Covid-19 deaths -- a number that keeps growing with every passing hour. More than 2,000 people are dying of the disease each day in the US; that's more than 80 every hour, more than one every minute.
And yet, Trump has already spoken about the pandemic in the past tense and, not surprisingly, showered himself with praise. "We did a spectacular job," he said, echoing the message from his son-in-law and top advisor Jared Kushner, who told Fox News on Wednesday that the administration's response to the coronavirus is a "great success story." (yeah, so was Custers last stand....)
Incredibly, Trump is repeating his disastrous strategy from the first 10 weeks of the pandemic, when he acted as if the coronavirus was a political and PR problem that could be fixed with empty reassurances and propaganda, rather than a public health crisis demanding smart and forceful action.
Trump's utterances between January and the first part of March -- denying, minimizing and peddling junk science as the unfolding disaster cast its shadow -- are now legendary. "Looks like by April, you know, in theory, when it gets a little warmer, it miraculously goes away," he said on February 10. It's all "very much under control," he said on February 23. On February 27, with 15 cases in the United States, he declared, "In a couple of days we're going to be down close to zero."
Those words are indelible, irrefutable proof of his incompetence. So, you'd think after six weeks of trying to recover from that disaster, Trump would avoid repeating the same mistake. Instead, he's dusting off the old playbook.
"It's going to go. It's going to leave," Trump asserted on Wednesday when a reporter asked him why he thought the virus would be gone without a vaccine. "It's going to be eradicated," he continued, without offering any evidence to back up his obviously false assertions.
This week, Trump has embellished, exaggerated and lied, then lied about his lies and spread another layer of lies on top of the old ones. On Tuesday, he said the US would soon be ready to administer 5 million tests per day, only to deny making those claims the next day (It's all on tape).
He even went so far as to claim the President of South Korea called to congratulate him on what a fantastic job he's doing. (South Korea, which has handled the pandemic far more effectively that the US, diplomatically said it would not discuss its conversations with the Trump administration.) The core message Trump is trying to sell is that he's done a fantastic job -- that the problem is, for the most part, resolved, and that anyone who questions that is lying because they don't like him.
That Trump cannot resist puffing himself up is nauseating, but it doesn't necessarily lead to people's deaths. Other parts of his strategy, however, have a real impact on people's lives.
Trump allowed national social distancing directions to expire this week, leaving it up to state governors to take charge of when and how to reopen. What is most disturbing is that he is encouraging governors to violate guidelines for reopening the country that he personally announced from the White House two weeks ago.
For a brief moment, Trump took ownership of what was meant to be a careful return to normalcy. He branded the guidelines "Opening Up America Again," putting his MAGA fingerprints on a public health program. Among other things, the plan called for robust testing and 14 days of declining cases before loosening restrictions.
Those conditions have not been met, and now states are reopening to varying degrees, in violation of White House instructions. The President's reaction? "We've given them tremendous encouragement and support. We're backing them 100%."
Dr. Anthony Fauci, director of the National Institute of Allergy and Infectious Diseases, has stepped in yet again to curb the President's claims. He issued a warning to local leaders against "leapfrogging" critical milestones, and called it a "significant risk" to reopen without them.
But the President seems terrified about his dimming reelection prospects and is obviously anxious to see the economy moving again.
If there's one powerful factor working to mitigate the pernicious impact of Trump's politically-motivated rush to reopen, it's that the American public watched what happened when he denied and downplayed the threat of the virus at the onset of the pandemic. Despite protests and a handful of states easing orders to stay at home, the overwhelming majority of Americans think it's too soon to reopen, according to a PBS NewsHour/NPR/Marist poll.
Despite Trump's claim that the number of cases is declining (they climbed from 23,901 to 26,512 the day he said it), a downward trend in is not well established. His claim that the US has "tested more than all countries put together," along with Kushner's insistence that we have enough tests -- an essential element for safely reopening -- are patently false. Not even Congress can get enough tests for its members.
European countries that imposed much stricter lockdown measures than the US, and are further along the pandemic's trajectory, are reopening gingerly with many watching the United States once again in disbelief.
The mixed messages and self-serving statements from the White House again threaten to unravel what progress has been made in slowing the contagion.
Trump's attempts to downplay the crisis, along with his declarations of success and confusing U-turns, have produced a disaster for the country. We can only hope the experience has taught the American people one important lesson: Ignore what the President and his acolytes say. Listen to the experts.

How about some numbers folks.

Just a quick observation without getting the calculator out.

So that says that there are almost 1 million infected people with a unknown virus still running around among us. Will they, Can they, still infect others? This is the big part of the *UNKNOWN*!

But they will play with the numbers just as they do the crime numbers, you know crimes per 100,000 people, the numbers are down.... ummmm but we live in city populations of millions so if you 10x or 30x the 100,000 there is more crime then there ever has been.

It doesn't take an Eisenstein to figure that out, just turn on your 6 O'clock news.

BTW put this in you brain and regurgitate it... You hear about the woman that paid for a autopsy ($3.6k) on her husband that died on February 2nd? That's right, the results found that he died of COVID-19. No hospitals in this country do autopsy's as insurance will not pay for it, the procedure has to be paid for by an individual or crime investigation.

Mistakes can be made when hospitals are in triage, it's only human nature.

Why bother to respond to RW talking points....they refuse to listen to anyone outside their own cult.   So here is what donald said in Feb...the entire talk, so they don't say "cherry picking."

As a reminder, when one considers the faux narrative of flu death rate to COVID19,  I do scratch my head and wonder is they know that they are comparing an entire year to some mythical date, as he said that everything was under control / very small numbers on Feb 14.    So from Feb 14 to May 2, deaths in US from covid are equal to 12 months of flu deaths.    sigh.

Why bother to respond to RW talking points....they refuse to listen to anyone outside their own cult.   So here is what donald said in Feb...the entire talk, so they don't say "cherry picking."

As a reminder, when one considers the faux narrative of flu death rate to COVID19,  I do scratch my head and wonder is they know that they are comparing an entire year to some mythical date, as he said that everything was under control / very small numbers on Feb 14.    So from Feb 14 to May 2, deaths in US from covid are equal to 12 months of flu deaths.    sigh.

tRump has ultimate control of a core base. There is no sense in debating anything with them, they fact check nothing he says and nothing he claims, they never will. They will consider nothing that conflicts with what their supreme leader tells them. It's erie. It's more than that, it's incomprehensible. 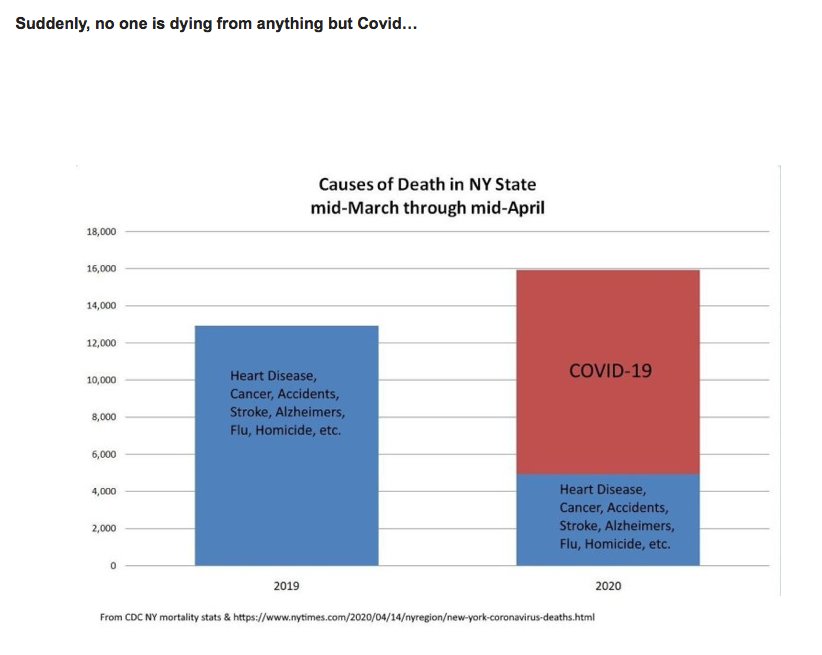 Looks like Jim caught the "Denial Bug".  Most understand that the virus kills many more people with underlying conditions.  Do you understand that?  If someone has heart disease, catches the virus and they die much quicker, what killed them?  The heart disease or the virus?  It's really not so difficult to understand.

That’s a fact Cent, very inclusive of other  symptoms. In fact there seem to be new conditions which are caused because of the affects of the virus.
What trump has accomplished is the creation of a two headed monster. The virus and the economy are tied together

and feed off of each other, causing negative effects for the US...one straight up in deaths, and one straight down in value...and will continue to do so.
Thru trump’s inaction and incompetence,

neither is being fixed. But, this certainly brings back another point...is trump doing this intentionally and are his responses planned...he’s certainly not helped to fix either...is it now

Trump's attempts to downplay the crisis, along with his declarations of success and confusing U-turns, have produced a disaster for the country. We can only hope the experience has taught the American people one important lesson: Ignore what the President and his acolytes say. Listen to the experts.
He's in denial because he can't come to grips with the reality of what's happening. He thought he was going to coast to victory on a good economy and his usual lies and boasting about the fantastic job he's done the last four years, but in a couple of month's time the pandemic has erased all that. The only thing he can think to do is pretend this virus is beaten and will soon be gone and the good times will roll again. So he's going to rush into opening the country back up which will cause a new surge of infections and deaths that he will blame on everyone but himself. This is going to be a very ugly summer.
4 Kudos
529 Views
0
Share
Report
Reply
Turn on suggestions
Auto-suggest helps you quickly narrow down your search results by suggesting possible matches as you type.
Showing results for
Show  only  | Search instead for
Did you mean:
Users
Announcements