I would like to go back and look at the questions at the CNN Town Hall (Bernie Sanders) and compare them to the questions asked by FOX News. Comparing transcripts.

Trump said he thought they were softball questions by FOX. It didn't seem like it. The questions seemed fair to me, mixed in with a few gotch'a questions to use as sound bites after the Town Hall. It seems all major news networks do that.

Well the reality is FOX NEWS is the network that did not attempt to "Control the Narrative" like CNN and MSNBC.

CNN and MSNBC is still shilling the lies about Trump going to jail and a lot of people were sucked in and led down that path full of lies!

Fox does a good job of presenting both sides and letting the viewer decide for themselves...

Fox News placed a full-page advertisement in the Thursday edition of Washington Post touting its viewership for a recent town hall event the network hosted with Sen. Bernie Sanders (I-Vt.) as "America's Most Watched Town Hall."

The ad comes three days after nearly 2.6 million viewers tuned into Fox News's town hall with Sanders on Monday night, making it the most-watched town hall of this campaign cycle so far, according to Nielsen Media Research.

DNC Chairman Tom Perez said Monday that the party is not reconsidering its decision.

Sen. Amy Klobuchar (D-Minn.) agreed to appear in a Fox News town hall in May, per an announcement by the network on Wednesday. 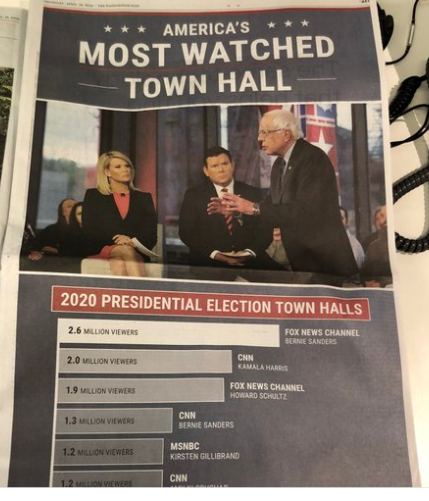