Even McConnell has come out saying that one of these or more are improper. tRump remains silent.

“What’s a high crime? How about if an important person hurts somebody of low means? It’s not very scholarly. But I think it’s the truth. — Lindsey Graham
Report Inappropriate Content
0
Kudos
216
Views
Reply
0 Kudos

I think Matt Bevin was so angry that he was kicked out of office, he thought he'd "stick it" to the people of Kentucky by releasing these violent criminals.  And then again, maybe he released all of those monsters to cover over and distract from the release of Patrick Baker whose family raised all of that money for Bevin's campaign.  Maybe both scenarios were his intention.  In any case, this man has done a horrible disservice to Kentucky and it's people with a condescending pat on their heads and a vengeful slap to their collective faces.  Hateful!

Bevin is a vile piece of animal feces, that's why tRump supported him.

I think Matt Bevin was so angry that he was kicked out of office, he thought he'd "stick it" to the people of Kentucky by releasing these violent criminals.  And then again, maybe he released all of those monsters to cover over and distract from the release of Patrick Baker whose family raised all of that money for Bevin's campaign.  Maybe both scenarios were his intention.  In any case, this man has done a horrible disservice to Kentucky and it's people with a condescending pat on their heads and a vengeful slap to their collective faces.  Hateful!

This is surprising, why? This is the mentality currently "ruling" (yes, ruling because we've allowed someone with no moral, business or social compass to "lead" this country) the United States by intimation (bullying) then reacts to non-compliance with moral and now threatening action!

Basically by releasing monsters who support with money into our population this is the "hey" to the voters who turned him out. "Deal with it" I think might be their thought.

Add the fact that the woman who supposedly wants to protect children from bullying while her son's father harangues a 16 year-old female, what does this mean to the future of humanity?

Sure are "tough on crime" aren't they?

Good grief. I heard a tiny bit of this while driving today, but forgot to follow up. It almost sounds as if he's flipping the bird because he lost the election. It really does need investigating.

Good gosh .......... even McConnell says that certain pardons were improper. (of course he may have spoke before tRump directed him differently).

"Drawing particular scrutiny was the pardon of Mr. Baker, who was convicted of shooting and killing a man during a home invasion in 2014; he was later sentenced to 19 years in prison. His family hosted a fund-raiser for Mr. Bevin that raised $21,500 last year," says the Courier Journal.

Also, keep in mind that this is the kind of man that tRump supports. tRump made a visit to Kentucky to endorse Bevin in his second run for governor. tRump is silent now, is he trying to distance himself?

Maybe one of them will be so happy they will look up his family and go and celebrate and not in a way he will appreciate.

Hopefully, KARMA  will come back to some of the scum of the earth, and he is no better than the men he gave pardons to.

The outgoing governor pardoned or commuted the sentences of more than 400 people as he left office, prompting calls for an investigation. 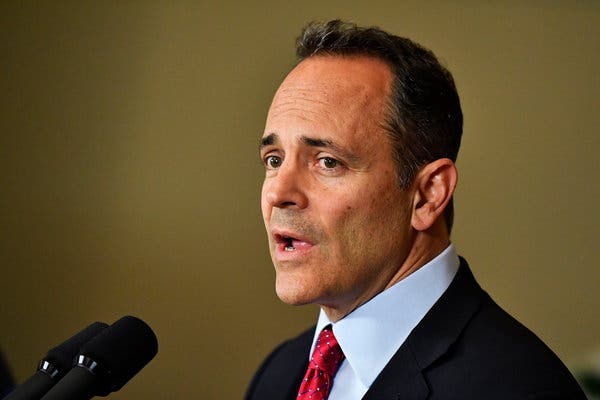 On Twitter, former Gov. Matt Bevin of Kentucky defended his decisions, saying he “personally wrote every word of justification for each pardon granted and each sentence commuted.”Credit...Timothy D. Easley/Associated Press

Delmar Partin was convicted of strangling a woman and stuffing her body in a barrel.

Micah Schoettle was sent to prison after a middle schooler testified that he had repeatedly sexually assaulted her, starting from the time she was 9.

Patrick Baker was found guilty of killing a man and impersonating a United States marshal during a robbery.

All three men walked out of prison this week after Kentucky’s outgoing governor, Matt Bevin, issued more than 400 pardons and commutations during the final days of his administration.

His actions set off a controversy that continued to ripple across the commonwealth on Friday, days after Mr. Bevin, a Republican whose administration was fraught with conflict and who lost re-election in a red state by more than 5,000 votes, officially left office.

Lawmakers called for investigations, and prosecutors complained that neither they nor victims’ families had been consulted or notified. The Courier Journal, based in Louisville, ran a front-page article quoting a relative of a slain victim with the headline: “Matt Bevin can rot in hell.”

Front page of @courierjournal this morning.

Among those seeking an investigation was a leader of Mr. Bevin’s own party, Robert Stivers, the Republican president of the State Senate. Late Friday, he asked the United States Attorney’s Office to look into the matter.

“From what we know of former Governor Bevin’s extreme pardons and commutations, the Senate Republican majority condemns his actions as a travesty and perversion of justice,” Mr. Stivers said in a statement. “Our citizens, and especially the crime victims and their families, deserve better.”

In a 20-part defense posted on Twitter late Friday, Mr. Bevin characterized his process as fair and thorough and argued that many of the offenders he had pardoned had, in fact, been out of prison for years.

"I personally spent hundreds of hours reading every application and file of those who received a pardon,” he said, adding that he “personally wrote every word of justification for each pardon granted and each sentence commuted.”

He added that “suggestions that financial or political considerations played a part in the decision making process are both highly offensive and entirely false.”

It’s not unusual for a chief executive to issue pardons on the way out the door, and most of the people freed by Mr. Bevin this week were serving low-level drug convictions. But the governor also released inmates who had been convicted of violent crimes, including one whose family had supported his campaign.

Drawing particular scrutiny was the pardon of Mr. Baker, who was convicted of shooting and killing a man during a home invasion in 2014; he was later sentenced to 19 years in prison. His family hosted a fund-raiser for Mr. Bevin that raised $21,500 last year, The Courier Journal reported.

In an executive order pardoning Mr. Baker, the former governor wrote that “the evidence supporting his conviction is sketchy at best.” He said that Mr. Baker had “made a series of unwise decisions in his adult life” and that “his drug addiction resulted in his association with people that in turn led to his arrest, prosecution and conviction for murder.”

Two other men who participated in the home invasion did not receive pardons and remain in prison.

In another case that drew scrutiny, Mr. Partin was convicted of murdering a woman he had been having an affair with; he served 25 years before being released. The governor’s executive order said he was letting Mr. Partin out because of a lack of DNA testing, although the prosecutor said such tests wouldn’t have been relevant.

Pardoning and commutation decisions by governors are generally final and cannot be undone, said Rachel E. Barkow, a law professor at New York University who focuses on criminal justice.

“It’s always rough when there are particular instances that people don’t like and it causes people to question the entire enterprise,” she said, but the governor’s power is meant to act as “a check on mistakes in the system and overzealous prosecutors.”

She added, “It’s really important that we have governors who actually take this power seriously.”

Not all of the orders issued this week were controversial. The Lexington Herald Leader reported that Mr. Bevin had commuted the sentence of a man who was halfway through a 20-year prison term for a drug crime he did not commit.

But in a handful of cases, prosecutors and families spoke out in particularly strong terms.

“I’m disgusted,” said Rob Sanders, the Republican commonwealth’s attorney in Kenton County, near Cincinnati, who had supported Mr. Bevin and donated to his campaign. His office had prosecuted the case against Mr. Schoettle, who was convicted by a jury of rape, sodomy and sexual abuse of a child. Mr. Schoettle had been at the start of a 23-year prison sentence when the outgoing governor deemed the investigation and prosecution into the case “sloppy at best.” He was released on Wednesday.

The victim’s mother, who asked not to be identified in order to protect her daughter’s identity, said that she had been at home making dinner and a milkshake when she got a call from the commonwealth’s attorney’s office on Wednesday night.

“I just picked the blender up and threw it against the wall,” she said in a phone interview. “I still have to scrub the ice cream off my walls.”

She said that her family had only begun to recover from the trial, which wrapped up last year.

“I still haven’t wrapped my mind around it, how is this even possible that he’s walking around scot-free now?” she said. “It scares me to think that he knows he got away with it.”


"The only thing man learns from history is man learns nothing from history"
Report Inappropriate Content
2
Kudos
372
Views
9
Replies
Reply
2 Kudos
Turn on suggestions
Auto-suggest helps you quickly narrow down your search results by suggesting possible matches as you type.
Showing results for
Search instead for
Did you mean:
Users
Announcements