Donald Trump is no Richard Nixon

There's no comparison. Yes, Nixon had some problems but he had a number of good qualities as well. Trump is nothing more than a con man and a traitor. He has brought shame and disgrace to our entire society.

Special counsel Robert S. Mueller III’s report makes one thing clear: Donald Trump is no Richard Nixon. He is worse. And yet Trump seems almost sure to be spared Nixon’s fate. This will do severe — possibly irreparable — damage to the vital norms that sustain American democracy.

Nah. Upon the next Democratic president taking office, just watch how quickly the alt-right Trump base embraces those "vital norms" and insist the new president follows them to the letter. They're hypocrites like that.

Very true. Nixon must be giving the V sign that he's now a distant second to Trump. 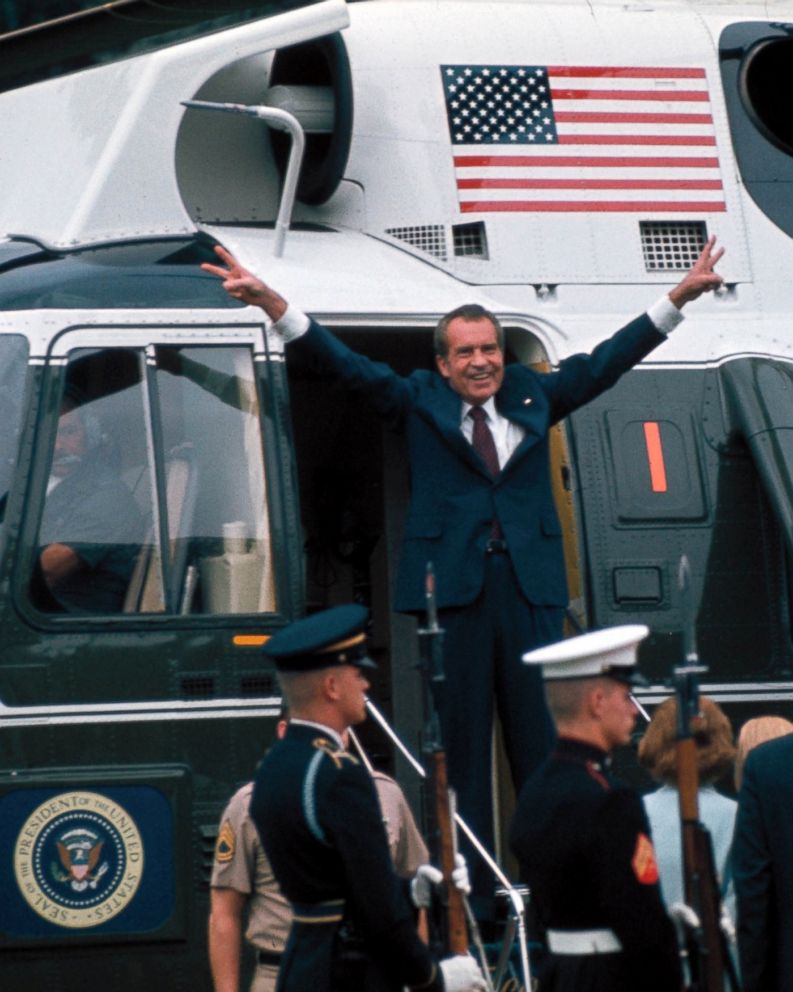 Donald Trump is no Richard Nixon

Special counsel Robert S. Mueller III’s report makes one thing clear: Donald Trump is no Richard Nixon. He is worse. And yet Trump seems almost sure to be spared Nixon’s fate. This will do severe — possibly irreparable — damage to the vital norms that sustain American democracy. There is still time for Congress and the American people to avert the worst of this damage, but the odds are long and time is short.

Despite his famous protestation to the contrary, President Nixon was a crook. He directed the CIA to shut down the FBI’s investigation of the Watergate burglary, in which several of his campaign operatives broke into Democratic National Committee headquarters. He also directed subordinates to pay hush money to subjects of that investigation. He then fired the first special prosecutor appointed to investigate these matters, hoping to protect himself and his senior advisors from possible criminal liability and untold political damage.

For these attempts to obstruct justice, Nixon paid the ultimate political price. When he terminated special prosecutor Archibald Cox, a ferocious public backlash forced him to appoint a widely respected replacement. That was Leon Jaworski, whose dramatic victory at the U.S. Supreme Court forced the release of secret White House tapes that destroyed the last vestiges of Nixon’s congressional support. He resigned the presidency days later. Had he failed to do so, impeachment by the House of Representatives and removal by the Senate were all but certain.

Nothing in Nixon’s presidency became him like the leaving it. For two generations, his downfall served as a cautionary tale for subsequent presidents who might be tempted to interfere with a federal investigation for personal or political reasons. Firing a special prosecutor, in particular, was almost universally understood to be political suicide. As Watergate showed, the American people simply would not stand for a president who sought to place himself above the law. This broadly shared understanding served as a crucial safeguard against the abuse of presidential power.

Then came Trump. After smashing through dozens of other deeply rooted norms of American politics to win the presidency, he treated the post-Watergate consensus with similar contempt. Just weeks after he took the oath of office, as the Mueller report details, Trump asked FBI Director James B. Comey to drop the investigation of national security advisor Michael Flynn. Before making this request, the president cleared the room, strongly suggesting that he knew his actions were improper. Requesting that the FBI drop an investigation of his friends is exactly what Nixon was caught doing on the famous “smoking gun” tape that sealed his fate.

Yet for Trump, this was just the beginning. A few weeks later, in early March 2017, the report shows that Trump lobbied vigorously to prevent Atty. Gen. Jeff Sessions from recusing himself from the Russia investigation. When Sessions nevertheless followed the advice of ethics officials and recused himself, Trump exploded in anger and personally pressed Sessions to reverse his decision. Trump wanted an attorney general who would protect him to be in charge of the investigation.

In May 2017, the Mueller report shows that Trump removed Comey as head of the FBI and concocted a deliberately false explanation related to Comey’s handling of the Hillary Clinton email investigation. Along with Trump’s attendant criticism of the Russia investigation and personally vindictive treatment of Comey, this action “had the potential to affect a successor director’s conduct of the investigation.” The report catalogs significant evidence that the president was worried the investigation would turn up politically and legally damaging information, and that it threatened the legitimacy of his election.

The report’s most damning evidence of obstruction of justice concerns the special counsel’s investigation itself. Once Trump learned in June 2017 that he was himself under investigation by Mueller’s team, his efforts to thwart the investigation reached new heights of audacity. That month, in a series of frantic phone calls, he ordered White House counsel Don McGahn to fire Mueller. The report describes “substantial evidence” that this was an attempt to obstruct the special counsel’s investigation; Trump was acting to protect himself from potential criminal liability and political damage.

When McGahn refused to carry out the order to fire Mueller, Trump resumed his campaign to get Sessions to take over the investigation and curtail it — or resign, so that Trump could appoint someone who would protect him. Much of this information was already in the public domain, but it is no less shocking for that. The evidence available to Mueller’s investigators, including contemporaneous documents and testimony under oath, provides a far surer foundation than anonymously sourced news stories.

The report also contains a wealth of new information. When Trump’s order to fire the special counsel was publicly reported in January 2018, Trump demanded that McGahn fabricate “a record denying that the President had tried to fire the special counsel.” This is witness tampering, plain and simple, of a much more direct and personal kind than any that Nixon engaged in. It also amounts to falsifying evidence, which counts as obstruction of justice even on the narrowest possible reading of the federal statute advanced by Trump’s lawyers.

Along similar lines, the report describes substantial evidence that Trump privately urged Flynn, Paul Manafort and Michael Cohen to “stay strong” and promised — through his lawyers — that they would “be taken care of” unless they “went rogue.” Together with the president’s public tweets praising Manafort and Stone for their bravery and baselessly accusing members of Cohen’s family of crimes, this conduct also amounts to witness tampering, plain and simple.

Lest it be forgotten, all of this took place in the context of one of the most serious law enforcement and counterintelligence investigations in the history of the United States. As the Mueller report explains, “The Russian government interfered in the 2016 presidential election in sweeping and systematic fashion” on behalf of Donald Trump. The FBI and Mueller set out to discover whether Trump’s campaign was complicit, and Trump took extraordinary measures to thwart their efforts.

And yet Trump seems very likely to escape direct accountability. House Democrats may well opt against pursuing impeachment, for entirely understandable reasons: It might be too wrenching for the country, in the absence of a clear popular consensus supporting Trump’s removal. It might not be good politics for 2020, with voters more concerned about bread-and-butter issues. Even if the House votes to impeach, a two-thirds Senate vote to remove Trump from office seems almost inconceivable.

But if Trump escapes unscathed, future presidents will take notice. The cautionary tale of Watergate will be superseded by the Trump triumph and its very different lesson:

In the hyperpolarized political environment of the early 21st century, the president is a law unto himself.

Report Inappropriate Content
Tags (4)
Reply
2 Kudos
Turn on suggestions
Auto-suggest helps you quickly narrow down your search results by suggesting possible matches as you type.
Showing results for
Show  only  | Search instead for
Did you mean:
Users
Announcements