Federal guidelines warned against gatherings of more than 10 people as a London report predicted high fatalities in the U.S. without drastic action.

Sweeping new federal recommendations announced on Monday for Americans to sharply limit their activities appeared to draw on a dire scientific report warning that, without action by the government and individuals to slow the spread of coronavirus and suppress new cases, 2.2 million people in the United States could die.

To curb the epidemic, there would need to be drastic restrictions on work, school and social gatherings for periods of time until a vaccine was available, which could take 18 months, according to the report, compiled by British researchers. They cautioned that such steps carried enormous costs that could also affect people’s health, but concluded they were “the only viable strategy at the current time.”

That is because different steps, intended to drive down transmission by isolating patients, quarantining those in contact with them and keeping the most vulnerable apart from others for three months, could only cut the predicted death toll by half, the new report said.

The White House guidelines urged Americans to avoid gatherings of more than 10 people. That is a more restrictive stance than recommendations released on Sunday by the U.S. Centers for Disease Control and Prevention, which said that gatherings should be limited to 50.

The White House also recommended that Americans work from home, avoid unnecessary shopping trips and refrain from eating in restaurants. Some states and cities have already imposed stricter measures, including lockdowns and business closings.

Asked at a news conference with President Trump about what had led to the change in thinking by a White House task force, Dr. Deborah Birx, one of the task force leaders, said new information had come from a model developed in Britain.

“What had the biggest impact in the model is social distancing, small groups, not going in public in large groups,” Dr. Birx said. “The most important thing was if one person in the household became infected, the whole household self-quarantined for 14 days. Because that stops 100 percent of the transmission outside of the household.”

Dr. Birx’s description of the findings was consistent with those in the report, released on Monday by an epidemic modeling group at Imperial College London. The lead author of the study, Neil Ferguson, an epidemiology professor, said in an interview that his group had shared their projections with the White House task force about a week ago and that an early copy of the report was sent over the weekend.

The group has also shared its fatality estimates with the C.D.C., Dr. Ferguson said, including that eight to nine percent of people in the most vulnerable age group, 80 and older, could die if infected.

“We don’t have a clear exit strategy,” Dr. Ferguson said of the recommended measures. “We’re going to have to suppress this virus — frankly, indefinitely — until we have a vaccine.”

“It’s a difficult position for the world to be in,” he added.

The report, which was not released in a peer-reviewed journal but was authored by 30 scientists on behalf of Imperial College’s coronavirus response team, simulated the role of public health measures aimed at reducing contact.

“The effectiveness of any one intervention in isolation is likely to be limited, requiring multiple interventions to be combined to have a substantial impact on transmission,” the authors wrote.

Dr. Ferguson said the potential health impacts were comparable to the devastating 1918 influenza outbreak, and would “kind of overwhelm health system capacity in any developed country, including the United States,” unless measures to reduce the spread of the virus were taken.

The White House task force did not respond to requests for comment. Officials stressed that the federal government’s restrictive new guidelines would be re-evaluated after 15 days, although they hinted that they were likely to be extended.

The study’s authors said their research made it clear that people in the United States might be advised to continue with draconian restrictions on their daily lives for far longer than Mr. Trump and the task force indicated on Monday.

“The major challenge of suppression,” the British scientists concluded, is the length of time that intensive interventions would be needed, given that “we predict that transmission will quickly rebound if interventions are relaxed.”

The authors said that so-called mitigation policies alone — isolating people suspected of having the virus at home, quarantining their contacts and separating the most vulnerable people from others — might reduce the peak demand on the health care system by two-thirds and deaths by half if applied for three months. But that would still result in hundreds of thousands of deaths and in health systems “overwhelmed many times over,” they said.

This was why the authors also recommended measures to distance the entire population, such as school closures. Those interventions, they suggested, could be “relaxed temporarily in relative short time windows" and then reintroduced if new infections began growing.

The researchers said that the long-term “social and economic effects” were likely to be “profound,” and that the measures were not guaranteed to succeed and could themselves have “significant impact on health and well-being.”

“No public health intervention with such disruptive effects on society has been previously attempted for such a long duration of time,” they added. “How populations and societies will respond remains unclear.” 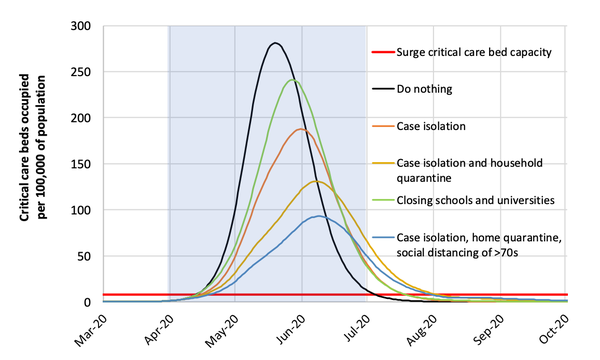 We must hold tRump responsible for his inaction in December and January. Many deaths are on his hands.

We must hold tRump responsible for his inaction in December and January. Many deaths are on his hands.

The flattening of the disease does not eliminate the disease, it just puts a longer burden on the medical treatment centers.     The UK paper estimated the deaths in US to be in the range of 2.2M.  and that is what got donald's attention.    The paper date is 3/16/20.   When did donald finally decide that something had to be done?    https://www.imperial.ac.uk/media/imperial-college/medicine/sph/ide/gida-fellowships/Imperial-College...

PRO-LIFE is Affordable Healthcare for ALL .
1 Kudo
92 Views
0
Share
Report
Reply
Turn on suggestions
Auto-suggest helps you quickly narrow down your search results by suggesting possible matches as you type.
Showing results for
Show  only  | Search instead for
Did you mean:
Users
Announcements