Outstanding failure of epic proportion. Conflicting messages, Bernie is in charge, Biden is a puppet for the left.

The democrat party is a ideological chameleon. Joe... You can't be a moderate and a liberal progressive at the same time. I guess when you haven't done anything in 47 years in government other than be the gaff king.... you go with wind. I suspect biden will star in a sequel to Gone with the Wind.

This election is about restoring respect back to the office of the presidency. Decent Americans are tired of the pathological lying, non-stop insults, criminal behavior, convicted felons, and overall incompetence of the Trump presidency.

This election is about restoring respect back to the office of the presidency.

So in your view that would be accomplished by the voters electing a person with clear cognitive decline that would soon hand the reins to Kamala Harris?

IMO that would be a grave mistake... You are just wrong on this, she is a chameleon, and everybody knows it. 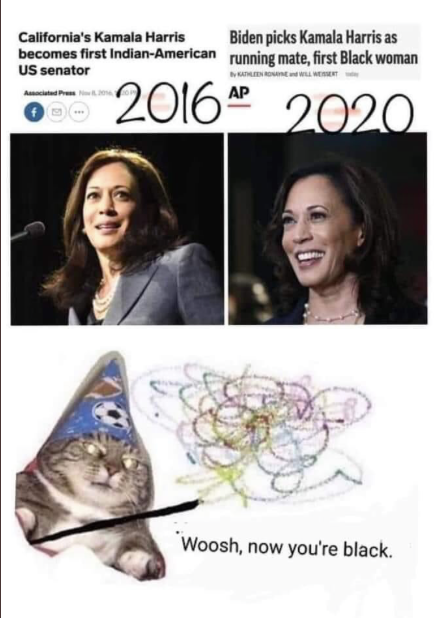 And Michelle did hit it out of the park!

While in the meantime, to show what a great leader he is, trump groups a bunch of his supporters together at two events, crams them together, no masks, for a mass virus infestation!

I wonder if melania will try stealing Michelle’s speech again.

Trump hits back at Michelle Obama after searing DNC speech, says he 'would not be here' if not for her husband Trump’s tweets come after former first lady slammed the president during first night of the 2020 DNC

President Trump on Tuesday hit back at former first lady Michelle Obama, saying he wouldn’t have been elected “if it weren’t for the job done” by her husband, former President Barack Obama.

Trump’s tweets come after the former first lady slammed the president and his administration during the first night of the 2020 Democratic National Convention, saying that his White House operates in "chaos” and without “empathy," while urging voters to cast their ballots for Joe Biden like their lives depend on it.

"Somebody please explain to @MichelleObama that Donald J. Trump would not be here, in the beautiful White House, if it weren’t for the job done by your husband, Barack Obama," Trump tweeted early Tuesday.

He added: “Biden was merely an afterthought, a good reason for the very late & unenthusiastic endorsement.”

The president went on to tout his administration for building "the greatest economy in history, of any country, turned it off, saved millions of lives, and now am building an even greater economy than it was before.”

“Jobs are flowing, NASDAQ is already at a record high, the rest to follow,” he said. “Sit back and watch!”

The president, defending his handling of the coronavirus pandemic, then slammed the Obama-Biden administration for their “response” to the H1N1 Swine Flu, which he said was considered “weak and pathetic.”

“Check out the polling, it’s really bad,” he tweeted. “The big difference is that they got a free pass from the Corrupt Fake News Media!”

Trump then shifted to the Russia investigation, blasting the former Obama administration for “spying” on his campaign.

“The ObamaBiden Administration was the most corrupt in history, including the fact that they got caught SPYING ON MY CAMPAIGN, the biggest political scandal in the history of our Country,” Trump said. “It’s called Treason, and more.”

He added: “Thanks for your very kind words Michelle!”

The president’s Twitter broadside came after the former first lady slammed the president in prerecorded remarks, where she stressed the “awesome power of the presidency,” while saying the job “requires clear-headed judgment, a mastery of complex and competing issues, a moral compass and an ability to listen.”

"Whenever we look to this White House for some leadership or consultation or any semblance of steadiness, what we get instead is chaos, division and a total and utter lack of empathy,” she said Monday.

Obama, in an impassioned address, concluded that Trump is “the wrong president for our country.”

“He has had more than enough time…He is clearly in over his head,” she said. “He cannot meet this moment. He simply cannot be who we need him to be for us.”

Obama went on to warn: “If you think things cannot possibly get worse, trust me, they can, and they will if we don’t make a change in this election.”

“If we have any hope of ending this chaos, we have got to vote for Joe Biden like our lives depend on it,” she said. “I know Joe. He is a profoundly decent man guided by faith.”

Obama said "empathy" was something she has "been thinking a lot about lately.”

"The ability to walk in someone else's shoes. The recognition that someone else's experience has values, too," she said. "Most of us practice this without a second thought.”

She went on to say that children in the U.S. "are seeing what happens when we stop requiring empathy of one another.”

"They're looking around wondering if we’ve been lying to them this whole time," she said. "They see people shouting in grocery stores unwilling to wear a mask to keep us all safe; they see people calling the police on folks minding their own business just because of the color of their skin...They see our leaders labeling fellow citizens enemy of the state, while emboldening torch-bearing white supremacists.”

Obama went on to reference her “they go low, we go high” catchphrase, explaining that “going high is the only thing that works” but doesn't always mean being nice.

“When we go low, degrading and dehumanizing others, we just become part of the other noise that’s drowning out everything else,” she said. “Let’s be clear: going high does not mean putting on a smile and saying nice things when confronted by viciousness and cruelty.”

She added: “Going high means going the higher path—scraping and clawing to that mountain top.”

The address was widely praised by Democrats as a powerful indictment of the administration.

TRUMP LAYS DOWN GAUNTLET FOR BARR IN DURHAM PROBE: EITHER 'GREATEST ATTORNEY GENERAL' OR 'AVERAGE' G...

Meanwhile, last week, U.S. Attorney John Durham, who was tasked last spring with investigating the origins of the investigation into whether members of the Trump campaign colluded with the Russians to influence the 2016 election, announced his first charges against former FBI lawyer Kevin Clinesmith. Clinesmith was charged with making false statements.

It is unclear if and when more charges could be forthcoming, but Attorney General Bill Barr said earlier this summer that he does not expect Durham's findings will lead to a “criminal investigation” of either former President Barack Obama or former Vice President Joe Biden -- while noting that their concern of “potential criminality” in the conduct of that probe is “focused on others.”

Putin slithered the Toad into the White House and now holds secret phone talks to give instructions to his trained Poodle 3-4 times A WEEK.

Now the Toad is dismembering the USPS to suppress the vote that will send him to bankruptcy when Putin calls in those loans and when toad is tried for extortion, bribery, lying to the FBI, he'll spend the rest of his days broke and in JAIL.

Of course he's bitter and obnoxious about the ones who will do that to him - We the People.

thing is alla this latest voter suppression will cut the REPUBLICAN vote as well - not every GOP is LITERALLY willing to die for their Toad, so the restricted mail in vote will cost toad more voted than Biden will lose.

Michelle knocked it out of the park last night as I knew she would!!!

The democratic party is full of intellectuals, professionals  and  the working class  voters who are very savvy.

Republican Intellectuals are very confused these days.   Trump has won any  voters that GOP reformers yearn for—but with racism and xenophobia,  not policy ideas he has no clue of.     .

Since TRUMP cannot put a grammatical sentence together... I'm hoping  during the RNC convention that  he  won't read from a script but speaks straight from his   "HEART" which is certain to be about "nasty women",   whining that people don't like him,   and how he's PERFECT  with all his accomplishments which of course is   his version  of reality.    .

Trump was elected in 2016 and accomplished much of what he said he would do.  A business man expecting and getting results from his people busy solving the problems the democrats only complain about.

So the way I see this 2020 election stacking up is, I can vote for the candidate with a proven track record of "Action" or vote for a politician that has been in politics for 47 years with "No Action" he or anyone on this forum can point to!

Wait, I guess he did accomplish something I almost forgot about...

When he was VP and Obama's point man concerning Ukraine, he succeeded in getting the Prosecutor that was investigating Bursima fired from his job which killed the investigation.

His son was on the Board of Directors of that energy company pulling down $80K per month...  Yeah let that sink in...

That was the same Hunter Biden that was kicked out of the Navy for cocaine use.

This election provides us with an easy choice...

Tom5678
Honored Social Butterfly
I haven't watched Michel;e Obama's speech yet, but heard she knocked it out of the park!! Can't wait till Wed. night when her husband talks!!!

America or Trump.
Vote and vote early!!!
3 Kudos
292 Views
0
Share
Report
Reply
Turn on suggestions
Auto-suggest helps you quickly narrow down your search results by suggesting possible matches as you type.
Showing results for
Show  only  | Search instead for
Did you mean:
Users
Announcements