Nice graphic. Hope you send it along to President Bone Spurs. 🙂 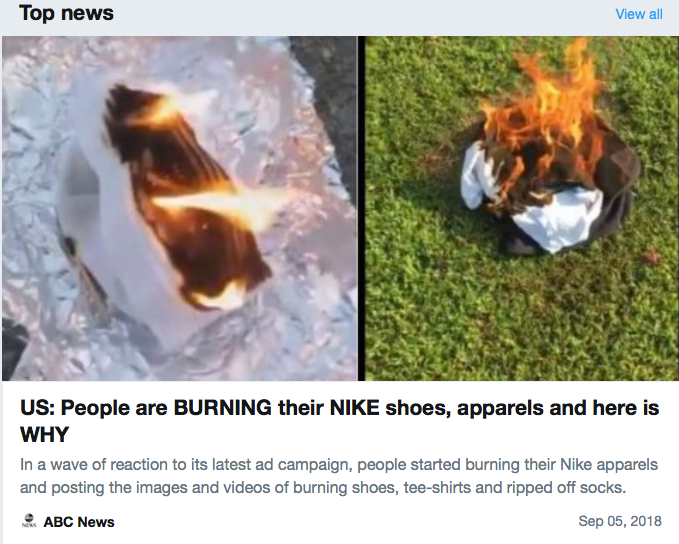 I guess you would agree that the BURNING OF BOOKS of those you don't agree with is also a valid image of a form of protest.

Here is an image for your viewing pleasure:

I cannot wait for the sales numbers to come in.  I bought a pair of Nike's last night just because of Colin.  I can see the motto now. "Fight fascism, buy a pair if Nike's".

God, I wish Conservatives would pay attention to the actual Constitution.

I have never owned a pair of Nike shoes but I think I may buy a couple pairs now.

Trump Cult members don't get it.

What does Comrade Trump do? He turns mini-protests (less than 10 out of more than 1,700) into a national crisis with his base.

Why didn't Trump's base get angry when Comrade Trump committed borderline Treason during his meeting with Vladmir? That's something worth getting angry over.

I cannot wait for the sales numbers to come in.  I bought a pair of Nike's last night just because of Colin.  I can see the motto now. "Fight fascism, buy a pair if Nike's".

God, I wish Conservatives would pay attention to the actual Constitution.

Are those the graves of soldiers or of unarmed black men gunned down by police officers?

TRUMP THE CHUMP is too stupid to realize that NIKE'S CAMPAIGN is a celebration of VICTORY of the right to exercise your 1st Amendment rights peacefully over the antagonistic words of the world's most powerful idiot.

After all, NIKE was the Greek Goddess of Victory.

I wonder what TRUMP THE CHUMP thinks about your image.

Using his own "very stable GENIUS" stature as a measuring stick.... he said this of HEROES as he spoke of John McCain, " He is not a war hero. He was a war hero because he was captured. I like people who weren't captured."

Removing PRISONERS OF WAR from the list of MILITARY HEROES with his stupid, stupid words seemed like it was second nature to this idiot.

Using the very same "very stable GENIUS" analysis, one must believe that TRUMP THE CHUMP also applies the same twisted thinking to those that were "unfortunate" enough to be killed.

One has to believe that, deep down, TRUMP feels that they ARE NOT heroes either because they got themselves killed..... just like the POW'S got themselves captured....... and thus, sacrificing everything is a moot point.

OK.....so when do we see a nice boycott of the Catholic church for what they have actually done?

Report Inappropriate Content
8
Kudos
298
Views
Reply
8 Kudos
Turn on suggestions
Auto-suggest helps you quickly narrow down your search results by suggesting possible matches as you type.
Showing results for
Show  only  | Search instead for
Did you mean:
Users
Announcements