Team of scientists from the US and England say they discovered a new, more contagious coronavirus mutation that may make it harder to end the pandemic.

A study by American and British scientists discovered a mutation in the original coronavirus that may mean the virus has become more contagious, an official at Los Alamos National Laboratory confirmed Sunday.

Researchers at the laboratory in New Mexico, Duke University in North Carolina and the University of Sheffield in England investigating the COVID-19 virus discovered a mutation labeled Spike D614G. Viruses with the Spike D614G mutation have been replacing the original Wuhan form of the virus and spreading rapidly around the globe.

If you think his incompetence with the first version was bad.......wait until you see the way he mishandles the second version.

As the Virus continues to rapidly spread across areas of the U.S. Trump Cult members completely ignore the numerous mistakes made by their idol and hero in the White House.

As the Virus continues to rapidly spread across areas of the U.S. Trump Cult members completely ignore the numerous mistakes made by their idol and hero in the White House.

And so faced with his miscalculations about the COVID spread, our fearless leader eloquently responds, 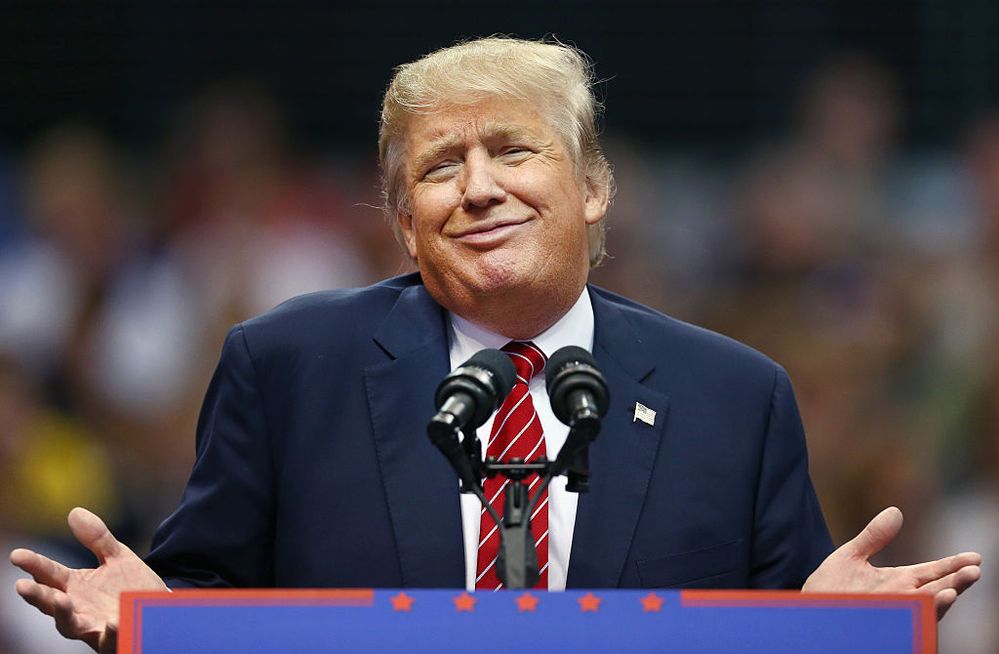 The Corona Virus and the latest mutation are not Trump's fault. However, his handling of the pandemic has been atrocious and cost Trump big time with almost everyone who is not part of his cult. It also resulted in thousands of deaths we could have possibly avoided.

Remember when Trump said he had the virus "Under Tremendous Control"? Or, everything will return to normal by Easter Sunday? Drink Bleach and Take Hydroxychloroquine to treat the virus!

Never expect his cult members to admit Trump was wrong. Their role is to defend everything he says and does.

The Obama cult is dumb enough to drink bleach?

Ignorance:   Some just couldn't leave it alone:   Yesterday Donald declared that his magical wall stopped Covid19....while in Yuma, AZ.    Goodness, if you know anything about that speck on the map, then perhaps you should know that the cases and related deaths are spiking.

Back in MAY there was supposed to be some border opening at the US / MX border, but that has now been delayed.   Now why would that be?

Oh gee, maybe this is why (nothing to do with WALL)

The Department of Homeland Security said on Tuesday the travel restrictions from Mexico and Canada into the U.S. along the border are being extended until June 22 at 11:59 p.m. Only essential travelers will be able to go across the border to the north and south of the U.S. The travel limitations were first implemented on March 24 and later extended until May 21.

According to a statement, acting DHS Secretary Chad Wolf said the risk of spreading the coronavirus between the U.S. and Mexico and Canada poses an ongoing "specific threat to human life or national interests." Federal officials said the decision was mutual between the countries.

So, NO, while we all agree that Donald has no clue, the travel notice change came from DHS, not Fauci....just saying!

If it keeps an illegal alien (with Covid19) from coming in, he's right!

Do you think the Trump Administration is preparing for a possible serious mutation of the Virus?

JimC said, "This evil act could have been contained in Wuhan but it was not.  That is the "cause" of the ultimate "effect" being felt all around the world."

His statement has nothing to do with science, it is nothing more than an opinion. And in my opinion, he is wrong. Once the virus came into contact with humans, it was all over.

His statement has nothing to do with science, it is nothing more than an opinion. And in my opinion, he is wrong. Once the virus came into contact with humans, it was all over.

No worries, CeeTee. I'm sure it will be gone by April.

No worries, CeeTee. I'm sure it will be gone by April.

Love your sarcasm, they (core trump supporters) are gullible enough to believe anything tRump says and will accept anything he does.

It was announced today by experts that the numbers that contract the virus will double by June. The number of deaths will rise, and tRump continues to play politics.

You are right ChasKy, life will likely change.  I live in a predominately Asian neighborhood, Asian immigrant neighborhood, and folks have worn masks for years during the winter mostly, but I see it year-round to some extent.  I foresee that as the norm for several years ahead, if not more.

I've watched work culture change over the past few decades.   30 years ago, I was expected to be at work no matter how sick I was.  Now they highly encourage us to stay home when sick.  Moving forward, I can see our being forbidden from working now if we have a temperature or any other symptoms of illness.  My job has transitioned well to teleworking, so at least there will be more infrastructure in place to help folks stay home and still be productive.

There will be huge changes in nursing homes and rehabilitative care facilities as well.  My husband was in one for a few months after a TBI a few years ago, and now COVID has swept through it like wildfire.  :catsad:   I know several nurses and other care workers there who are sick.  They've got to do something to better protect our most medically fragile.

Most of all, I hope this pushes us toward paid sick leave for all, and a true health care system that provides quality care for all.

More right wing mythology and distortions of reality. The Trump World propaganda arm is trying to blame China for creating or disseminating the virus. That conclusion is not based on science or logic.

They do not realize how devastating the virus was and is to the Chinese economy.

Did China lie and handle this poorly? YES, but that's not the same as blaming them for creating the virus. That is a naive and simple approach, which is typical of Trump supporters.

Do your own research, read what real scientists say, as opposed to guests on the Fox Propaganda Network.

Did China lie and handle this poorly? YES, but that's not the same as blaming them for creating the virus.

No one has blamed them for "Creating the virus"...  Their crime is, lying about its origin and how it is spread, to the world and using the W.H.O. to help them perpetrate the lie.  This evil act could have been contained in Wuhan but it was not.  That is the "cause" of the ultimate "effect" being felt all around the world.

and now this. Trump sitting on money earmarked to fight the virus. Why sir??????

Trump sitting on money meant for testing and fighting the virus. OOOPS!!!!

Does it seem that for whatever deluded reason he may have, that trump intentionally wants the virus to spread, and his actions would reinforce that? And what would putin want?...a weakened America. What does trump owe putin...and why was a District Attorney that was investigating trump, fired?...just my thoughts and opinions.

Back to the virus mutation, does anyone think that we will get, and have available the appropriate number of tests that we need? To help to keep it from spreading!

Tom5678
Honored Social Butterfly
Correct william. What Putin wants more than anything is the destruction of America, and to do that he wants Trump to be re elected.
1 Kudo
783 Views
0
Share
Report
Reply

What a warped view!

Really! Then why hasn’t trump done more to help prevent the virus spreading, and why do we lead the world with infections and deaths?
trump certainly hasn’t done anything to keep us safe.

Really! Then why hasn’t trump done more to help prevent the virus spreading, and why do we lead the world with infections and deaths?

Trump is NOT a leading expert on the Corona Virus and it seems even Dr. Fauci is not!  We do not lead the world as a percent of population in virus deaths but in total numbers, yes.  Why are you comparing Italy's total number of cases/deaths with 62 million people versus our country with 330 million?  Test more, discover more!!!!

Trump is best guessing what to do unlike Biden who knows "stay in the basement" where it's safe and you don't have to answer too many questions there!

Tom5678
Honored Social Butterfly
TRump has a 58% disapproval rating of how he has not handled the virus.
0 Kudos
828 Views
0
Share
Report
Reply

Viruses with the Spike D614G mutation have been replacing the original Wuhan form of the virus and spreading rapidly around the globe.

Yes, China and the W.H.O. really committed an evil act when they lied to the world about how this virus was spread and its origination.  IMO there will be substantial consequences for China and the W.H.O. for this intentional lie.  Time will tell, but many countries around the world are re-evaluating their relationship with China.

This has taught us a critical lesson and I pray we alter our level of dependence upon China for products that keep us safe and healthy.  This is America and this is what we do best, we solve big problems and share that result with the entire world.  China, not so much...

Why weren’t the American people told about this virus in November 2019 when US intelligence activities informed NATO and Israel? Why did it take over two months for our government to actually do something to prepare this country?

The Spanish Flu mutated from a mild virus in the spring of 1918 to a virus that could kill in hours in the fall of 1918.

The Covid-19 virus rapidly morphed into two strains. Now there are multiple strains of it, this is simply the latest one. This is why I think it will be so hard to develop a vaccine.

The flu itself mutates, this is the reason that flu vaccines aren't 100% and they never will be. We may be stuck in the same situation with the Coronavirus only it is more deadly. People who have compromised immune systems or have other risk factors will have to develop long term habits in social distancing and be somewhat germaphobic to keep from getting sick. Since I developed Multiple Myeloma in 2011 I have had a compromised immune system at at times and in late fall of 2017 my immune system became permanently compromised. Since then I havehad to be very germ and virus conscious, more especially throughout flu seasons.  Now with the Coronavirus it is becoming a matter of life and death for many people. If the virus mutates in certain ways, more and more people could come to be at risk.

GaryG887805
Newbie
Sure, he'll even have 4 more years to make it happen, after November.

Not if his campaign continues to deliver at the level it did in Oklahoma City he won't.


Man learns from history that man learns nothing from history.
1 Kudo
1,507 Views
0
Share
Report
Reply
Turn on suggestions
Auto-suggest helps you quickly narrow down your search results by suggesting possible matches as you type.
Showing results for
Show  only  | Search instead for
Did you mean:
Users
Announcements