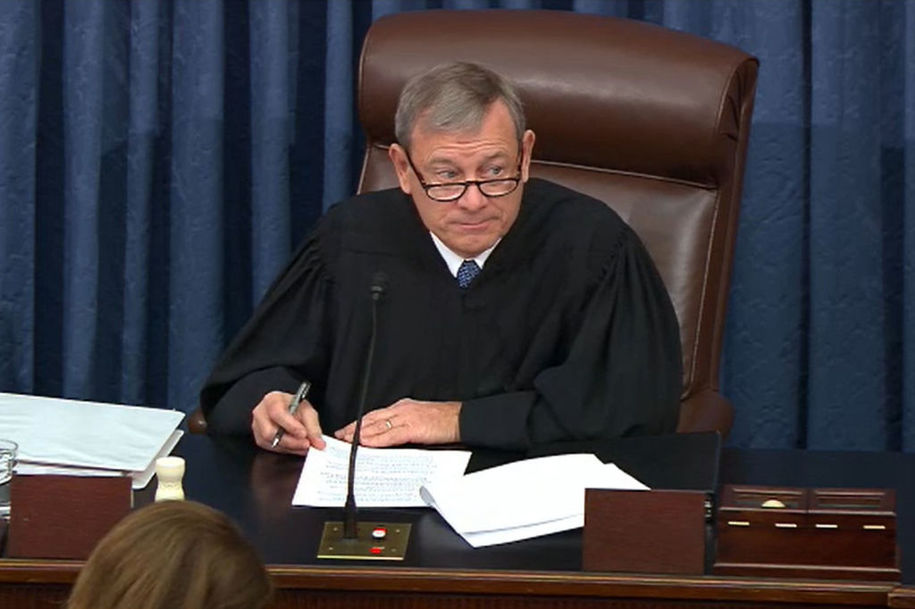 Senate Republicans are united again in saying they've heard absolutely nothing new in the House impeachment managers presentation against Donald Trump. That's after they voted en masse, as a unified bloc, against 10 amendments from Democrats to provide more information at the outset of the trial. They don't want to hear anything new, which is glaringly apparent in their disdain for the rules and blatant flouting of them.

They're acting like a bunch of middle school kids bored in their civics class. "Gum-chewing, snacking, yawning and alleged napping could be seen throughout the cramped chamber," AP's Laurie Kellman reports. "Some openly snickered when lead prosecutor Adam Schiff said he’d only speak for 10 minutes. And when one of the freshman House prosecutors stood to speak, many of the senator-jurors bolted for the cloak rooms, where their phones are stored." Which is the least of it. Numerous Republican senators have been reported to have just left for long stretches at a time. Rand Paul brought in a crossword to play with. At one point more 1/5 of the Senate—21 members—were out of the chamber. Which leads to one major question: what in the hell is Chief Justice John Roberts doing in the meantime, since he's refusing to enforce the rules?

Sign the petition: Senate Republicans are robbing America of a fair trial.

He is presiding over this trial, which is supposed to mean enforcing the rules, not acting like a potted plant and doing whatever it is he's been doing—catching up on reading? Crossword puzzles? We don't know that either, because Mitch McConnell didn't let any cameras in besides the ones controlled by him. We get one camera view, the person who is speaking, so all the senators who are supposed to be remaining in their seats, paying attention, not talking can do whatever the hell they want, it seems.

Republicans clearly don't give a **bleep** about anything, Trump could steal the entire treasury and if they got a kickback, they'd be fine with it. But they're being just a little too obvious in that, underestimating the extent to which the voters are turning against them, both in hearing new witnesses and documents, and in convicting and removing Trump from office.

They're playing with fire, increasing the likelihood that they'll be severely burned in November.

0 Kudos
63 Views
0
Share
Report
Reply
Turn on suggestions
Auto-suggest helps you quickly narrow down your search results by suggesting possible matches as you type.
Showing results for
Show  only  | Search instead for
Did you mean:
Users
Announcements