Candidates need young people to boost Latino voter turnout. Here's why.
"I often ask myself why people insist on saying that we're not involved, and it's because we're not included in these conversations," a young Latina says. Ofelia Alonso, 24, thinks there's a big misconception that most Latinos are "part of an older generation who doesn't care about politics."

That's why she's wasn't surprised that 75 percent of young Latinos in Texas had not heard from any presidential campaign in the last six months, according to a poll from the Center for Information and Research on Civic Learning and Engagement (CIRCLE), which studies young Americans’ political engagement.

"Organizers are the ones engaging with young Latino voters here, not the parties, not candidates," said Alonso, a field coordinator for the grassroots organization Texas Rising in the Rio Grande Valley.

"I often ask myself why people insist on saying that we're not involved, and it's because we're not included in these conversations," she said. "Candidates are not coming to engage with us."

A poll from @CivicYouth found that 75 percent of young Latinos in Texas have not heard from any presidential campaign in the last six months. Texas is one of more than a dozen states holding primaries on March 3, aka Super Tuesday. http://circle.tufts.edu/latest-research/new-poll-texans-under-40-shows-need-outreach-especially-amon...

Latinos are the nation's largest share of nonwhite voters: A record 32 million Latinos are projected to be eligible to vote in 2020, 13 percent of all eligible voters.

But what's more notable is their youth — about 40 percent of eligible Latino voters are between the ages of 18 and 35, according to census data. Latinos are among the youngest racial or ethnic group in the country with a median age of 30, according to the Pew Research Center.

One million Latinos are expected to turn 18 every year for the next two decades, meaning it's almost impossible to engage Latinx voters without understanding their connection to the nation’s youth vote.

In our poll w/ @alliance4youth, we found a majority of young registered voters were not contacted by campaigns via text messages, phone calls, or house visits. Campaigns need to be reaching out to young people if they want our vote in 2020. Learn more at http://allianceforyouthaction.org/youth-vote-poll/ … 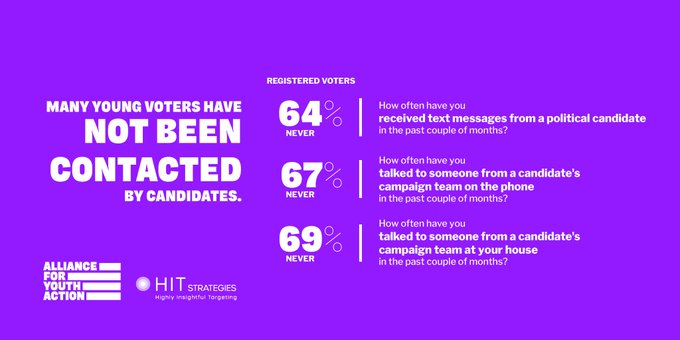 Groups who have been polling young voters say political parties, especially Democrats, are missing the opportunity to engage with one of the nation's largest growing electorates to increase Latino voter participation.

A poll by the Alliance for Youth Action and HIT Strategies found that 64 percent of young voters had never been contacted directly by a Democratic presidential campaign via text message, phone or email. They also found young voters are very engaged in politics — they're just more issue-oriented than candidate-oriented.

Some Democratic presidential candidates are scrambling to rally young Latinx voters in states such as California and Texas ahead of the Super Tuesday contests in 14 states on March 3. More than half of all Latinx eligible voters live in these states, according to Pew.

Victoria Sandoval has lived in Laredo, Texas, her whole life. As a field organizer with the grassroots group MOVE Texas, she's been registering many of the people she grew up with in the mostly Hispanic city to vote during the 2020 presidential election.

"I see how disenfranchised voters feel by presidential candidates," said Sandoval, 24, adding the feeling partly stems from "a tone-deaf approach" to how campaigns visualize the so-called "Latino vote."

While the issues young Latinx voters prioritize vary depending on where they live, Terrance Woodbury of HIT Strategies said most are not feeling the effects of a recovering economy since 74 percent believe they will stay the same or fall behind economically in the future, according to the poll he helped conduct. "It's not common for a young generation to be this pessimistic about the economy," he told NBC News.


Man learns from history that man learns nothing from history.
0 Kudos
60 Views
0
Share
Report
Reply
Turn on suggestions
Auto-suggest helps you quickly narrow down your search results by suggesting possible matches as you type.
Showing results for
Show  only  | Search instead for
Did you mean:
Users
Announcements